Previously in Bucharest, Nikolai Kaidanovsky, Sami Härkönen, Shiina “Misha” Mikado and Zlatan Kljujic were joined by the cleaner only known as Brendan. Their recent recruit, the French thief Marcel Clouseau was lost to the bite of thousands of vampire puppies and a well-placed thermobaric warhead near Lake Titan.

Nikolai, who was about to extract their ally Vienna “Vin” Cesarescu, suddenly found things at the Sunrise Hotel to be chaotic. Face to face with the lethal R-Team, Inish Medical’s operatives sent to East Europe for a job, Vin’s quick thinking saved Nikolai telling the others that he was a member of Julian Dragani‘s police cadre on their pay. But he found himself in a car fleeing the hotel with the driver Gregor, Faris Barrar, Mr. Chow and other members of Inish Medical’s R-Team operatives.

Misha and Brendan were to go directly to their teammate Jacob Novazembla (because their players were absent) who was with the Romani criminal cartel lord King Valentin, awaiting the retrieval of his love, Vin.

Sami and the visibly shaken Zlatan (at 0 Stability Points) still wearing their puce jogging suits and helmets drove their Lada Niva pacing the R-Team’s vehicle as they headed away from city centre. 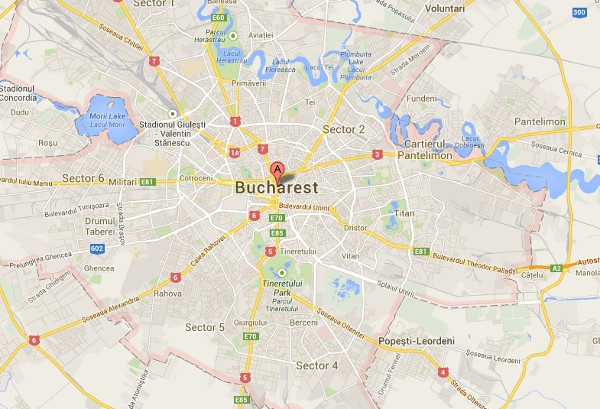 Escape From The Police Net

Earlier study of the Inish Medical’s Blackberry network hack by Jacob revealed the corporation’s “staff housing” at a neutral ground in Vienna, Austria. That would be R-Team’s destination.

But first they had to escape the net descending and tightening down upon Bucharest. A traffic gridlock caused the R-Team’s vehicle to move like molasses. And toward a police roadblock ahead set up by the mayor. Nikolai said, “Do not worry, friends. I will wave you through.”

Barrar asked, “What is your name?”

“Vaslov,” said Nikolai. “I work for Dragani. My job is to ensure your safety and I will see it to the end.”

Barrar was distracted by something, perhaps the roadblock ahead. He asked Nikolai, “Do traffic cops usually have dogs with them?”

The sound of a helicopter gradually became louder. It passed above them as it searched the cars. Apart from the pilot, they could see a dog in the co-pilot’s seat, its eyes unusually bright and alert.

“I know of a safehouse,” said Nikolai quickly. “It is my safehouse. Not even Dragani knows it. It’s back toward the city.” (With Nikolai spending 2 points of Reassurance) Barrar grudgingly accepted the suggestion since escaping the city was impossible for now.

“Quickly!” They abandoned their car and walked across to the bus stop at other side of the road. Barrar guided them onto a city tour bus which had stopped. He went to the driver and whispered to his ear. The rest of R-Team also did so with the other passengers. The driver and passengers stood up and filed out of the bus with a glazed, hypnotized look on their faces. The bus now only occupied by R-Team, Vin and Nikolai headed into town driven by Gregor.

En route, Barrar asked Nikolai, “You know what we are, Vaslov?”

“Then why aren’t you attempting to run?”

Nikolai thought for a moment for a lie, “It’s safer with you.”

From the corner, an indecipherable guffaw escaped Vin.

Nikolai began to describe his safehouse and its location. Sami and Zlatan copied via their encrypted tacnet and headed for it (spending 2 points of Urban Survival to reach there unscathed).

Escape to the Bookshop

Traffic heading back into the city was not heavy. Sami took over driving from Zlatan, shaken by the events of the Harmony Wings apartment complex in Titan. They arrived first. The street where Nikolai’s safehouse was located was lined with shops, but were relatively devoid of motor traffic and pedestrians. Packs of dogs lazed on and by the roads, eyeing them as the Lada Niva passed. The safehouse was a bookstore. Across the street was a dingy kebab restaurant with an open air section.

The commandeered tour bus arrived. Packs of street dogs began pacing then blocking it. They ran over a few dogs. The pack retreated a bit, but growled ferally at R-Team as they debarked. As Nikolai guided them into the bookstore he caught sight of Sami and Zlatan having some kebab across the road, watching them carefully.

The street dogs growled viciously at the R-Team until they were out of sight.

Unknown to R-Team, Nikolai’s contact, the bookseller Andrei Ciora was a former Spetsnaz GRU operative and understood the gravity of the situation when he saw his former colleague walked in through the door. He jibed, “What do you think you’re doing picking a fight with the local gang here?’

Barrar looked at the dogs through the front window and assessed, “They are pretty tough.”

Andrei suggested that he could help them cross the border into Bulgaria but Barrar declined. “We need to get to Austria by road.”

Suddenly Nikolai heard Sami over the tacnet, “No better time than now to extract Vin, Nikolai.”

His blood ran cold over the risk. Andrei had to get to safety. He smiled, turned to Andrei and said, “It’s a sunny day in Pripyat, isn’t it?”

Andrei did not visibly react to their GRU code phrase. He only answered, “It is!” Then he prattled on about empty things, the weather, his books and the city in general as he fished an envelope out from a drawer and slung a satchel over his shoulder. “I have a book delivery to make. I will be back soon.” Then he disappeared out the door. Nikolai knew he would not be back.

Meanwhile, the members of R-Team were arguing about not having enough supplies for all of them to reach Vienna. Mr. Chow said, “Maybe we should leave her behind.” Vin snapped, “I’m right here, guy. I can hear you.” Chow turned to glare at Vin. Barrar held him back, barking, “Shut up, Chow.”

Nikolai took a deep breath and approached them. He smiled and said, “Hi.”

The burly R-Team operatives were suddenly silent. They all slowly and surely turned to him. Keeping his cool, he told Vin, “There’s a kebab shop across the road. I was wondering if you’d like to have some with me.”

Vin’s eyes rolled. Chow’s fiery glare seared Nikolai. But Barrar calmly said, “Of course. You may if you wish.”

Vin and Chow were both surprised. Nikolai beamed his best smile at Vin, “Please.”

Barrar rumbled at Vin, “Go get some kebab.”

As they crossed the road, packs of dogs began snarling at Vin. She asked Nikolai, “Why did you ask me out for kebab?” Nikolai gestured at the restaurant across the street. Vin recognised the two men munching on kebabs, sitting relaxed at a table. 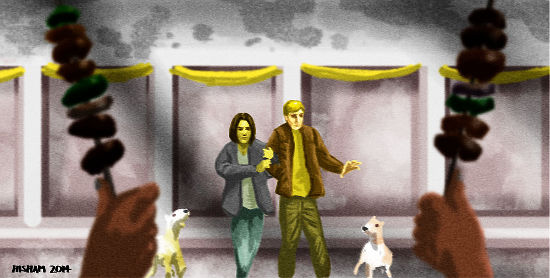 Escape from the Pack

Sami and Zlatan herded them to the Niva, but the snarling dogs began encircling and prepared to pounce on them.

Everything rushed past in a blink of an eye. Sami swung his helmet with the GoPro cam, knocking one down. Nikolai thrusted and stabbed one with a kebab stick. One dog bit and drew blood from Vin as they fled to the Niva. Leap. Bite. Snap. Punch. Kick. A dog leapt from the roof of the Niva and knocked Vin down. She kicked it and it flew up. High up.

They jumped into the Niva, with Zlatan at the wheel. He burned rubber as two dogs jumped onto the car’s roof with heavy thuds. Zlatan slammed the brakes, sending the two canines flying forward. The pack surrounded the car, but before Zlatan could run them over he felt an invisible push into his mind. A telepathic tendril from the dogs, trying to bend him to their will. The tendril touched Zlatan’s mind.

Immediately the dogs whimpered in fear and retreated away from the car.

Zlatan burned rubber once again and sped away. (Nikolai succeeds in a Sense Trouble roll.) Nikolai caught a glimpse of Mr. Chow looking at them calmly as they fled. Why did R-Team allow them to escape?

BLAM! The dog Vin had kicked into the stratosphere several moments earlier fell onto the street behind them.

Soon, the Andrei’s bookstore, the kebab restaurant and the dog pack were gone.

Vin sniffed at Zlatan, smiled and said, “I see you’re still not affected by sunlight yet.”

The Road to Ruse

Zlatan looked for a safe escape route out of Bucharest using backroads and driving through the woods (by spending 4 Driving points). In the process, they caught sight of their once-ally, the local thug Smash Chelaru and his men helping the local police set up roadblocks to look for them.

Many kilometres south of Bucharest and hours later, they pulled over at a truck stop. The sun was long gone.

They gave Jacob a call. He confirmed that Chelaru had switched allegiances. “Don’t talk to him. He doesn’t work for me now.” He told them to rendezvous with King Valentin and him at Valentin’s protected ranch on the Bulgarian side of the border, a dozen kilometres outside Ruse. Misha and Brendan were en route as well and would arrive first.

Before they resumed their flight from Bucharest, Vin winked at a young shopkeeper and led him to the bathroom. Meanwhile, Sami found a Castevania arcade machine in the truck stop and spent some coins on it. Zlatan and Nikolai napped in the car for a short while and awoke when Sami returned with Vin whose mouth and chin was smeared with blood and looked sated. Zlatan and Nikolai spotted the shopkeeper was clearly still alive, partially hypnotised and dazed, staggering back to his counter and wondering why he was smeared with his own blood.

The Niva revved and drove away. Although they safely had Vin, she was in dire need of the Inish serum that allowed her to function in the daylight and staved her bloodlust. She only had one vial left.

En route, Misha called and confirmed the location of the ranch. “We’ve scoped it out. It looks secure, appears to be a former chicken farm. Very big, has a villa, barracks and barns. Fences. Guard tower. Armed security. There’s even a BTR which they might have jacked from the military.”

The Niva travelled through the countryside and covertly over the Romanian-Bulgarian border. Soon, they came to the ranch, a brightly-lit patch in the woods. Gazing at the night sky as he drove Zlatan said, “I’m pretty sure anyone with a spy satellite knows of this place.”

Armed sentries opened the gates for them. Misha and Brendan greeted them as the Niva pulled up. The garish and gaudily-dressed Valentin, flanked by Jacob and another woman carrying a chihuahua in her arms, rushed forward to embrace Vin. He boomed and wept, “It’s been so long!”

Valentin thanked the team as he eagerly led Vin away to the villa showering her with pretty words.

Escape at the End of this RPG Session

The team, now back together for the first time in weeks, began to weigh their options and their next step in stopping Inish Medical.