Bad Example of a logo

Last Sunday I ran my first face-to-face, over-the-table Star Wars RPG game since 1999, with the GoKL crew. It was a tramp freighter campaign, set in the Rebellion Era, using classic D6 rules. I was quite anxious about it seeing it’s been a while since I was in practice – discounting the IRC chat-based Sabredart and Chronicles of the Wild Gundark campaigns I had several years ago.

There were seven of us. I was gamemaster and there were six players. We rolled 6-sided dice to determine the outcome of our actions, and the players decided what to do based on the scenarios and encounters I described to them over the game. It was fantastic collaborative storytelling.

Ultimately, this was the story that came out at the end of the game:

Long time ago in a galaxy far, far away… the galaxy is in turmoil. An Empire tightens its iron grip upon a million worlds. A rebellion arises to topple the corrupt government. But for quadrillions of beings, life goes on as usual. Demand exists. Supply is required.

With their cargo of machine parts, the crew of the Bad Example, a converted star yacht, arrives at its destination: The planet Sriluur and the township of Port Barrow.

The disc of planet Sriluur grew as the SoroSuub Personal Luxury 3000 star yacht Bad Example flew closer, piloted by Captain Hunter Maelstrom the piratical pirate, and the Trianii Nek’Koh’Moo’Su’May nicknamed “Annie” for her species name. Down below, Ssssawar the Trandoshan was chasing T’K’Li a.k.a “Tickley” the failed Jawa Jedi with a forklift while Aden, the former clone trooper and the protocol droid HK-78 nicknamed “Weapon X” watched.

In the cockpit, the comm board buzzed. “This is Sriluur Orbital Control patrol ship Shadowsun Three. Please identify yourself.”

Hunter replied, “This is the Bad Example, en route to Port Barrow. We have a cargo of machine parts to deliver.”

There was a slight pause before Hunter and Annie heard, “Please submit to a search. Prepare for our officers to board your ship momentarily.”

After the channel was closed, Hunter called the cargo bay with the intercom and said, “All hands, we are about to be searched by Sriluur Orbital Control. Anything illegal shall be made to disappear.” Everyone in the cargo bay scrambled to hide their illegal weapons. Ssssawar hissed, “Aren’t we at the edge of Hutt Space? I don’t think these are Imperials.”

Annie furrowed her brow and said, “Hunter. There’s no such thing as a Sriluur Orbital Control.” 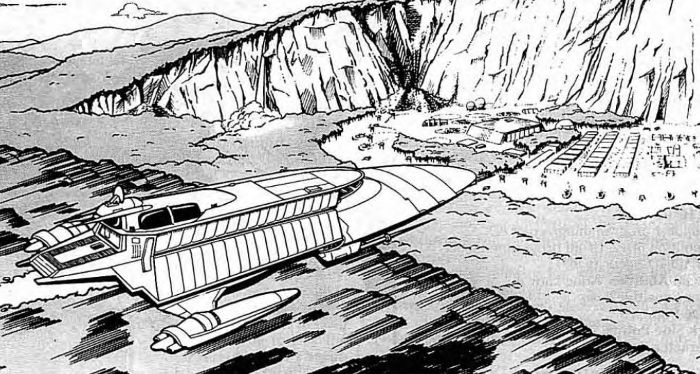 “In which case,” said Hunter hitting the intercom button again. “All hands, we are about to be boarded. When they enter, shoot them.” Everyone in the cargo bay then scrambled to arm themselves with weapons, legal or otherwise.

The ship was a Corellian light freighter, a YT-1760. Annie noticed that emblazoned on its hull was a thick red circle with five skulls on it. She slowed the Bad Example down as the YT-1760 positioned itself to dock with the topside airlock.

Every crew member assembled at the top deck, the observation lounge with its numerous tall windows and varnished wooden floorboards. Hunter was in his spacesuit and wore a rocket pack. He planned to carry Weapon X and board the YT-1760 from outside while the others took care of business at the lounge. The blast doors to the patio opened while the forcefield kept the air in, allowing Hunter and Weapon X egress into space. The doors slid shut again.

Annie, Ssssawar, Aden and Tickley awaited in hiding spots. Then a dark-clad figure dropped from the airlock with a blaster pistol in hand. Annie signalled her crewmates to hold. The figure moved forward as it signalled above. Three more figures, similarly clothed, dropped down into the lounge.

“Attack!” The intruders were surprised as blaster bolts criss-crossed the space around them. At the same time, Hunter boosted himself and Weapon X through space with his rocket pack, heading towards the top of the docked YT-1760. One by one, the dark-clad intruders fall with smoking holes in their chest. One developed a condition where his head was vaporised and his neck was a smoking stump. Suddenly, after holding his attack for some time, out came Tickley rushing at one intruder with a lightsabre and screaming at the top of his Jawa lungs. The intruder trembled, and was visibly shaken. But the glowing blade missed its mark. After a second, the intruder laughed at this. After two, a blaster bolt tore his guts out.

The smoke cleared. Four intruders were down and the crew was still on their feet. Annie radioed Hunter, “All clear here.”

While the firefight occurred, Hunter almost overshot his mark and a quick grab prevented him and Weapon-X from flying off into space. The airlock was locked so Hunter removed the panel, crossed a few wires and unlocked the hatch. He shrugged to his droid crewmate and opened the hatch. There was a sudden push and a rush of air came gushing out of the open airlock hatch. Small bits of equipment flew out. As did one unhelmeted black-clad person. He might have been a human but Hunter couldn’t tell. He yelled waving his blaster, “Get back here!” But the person was long gone.

Since space was black too, you see.

Weapon X took point, blaster rifle brandished and ready for action. After cycling the airlock, they entered the corridors of the unknown freighter. There were no one in the lounge. They moved towards the bow. There was no one in the toilet. There was no one preparing any food at the small kitchen, just outside the cockpit door.

Weapon X hit a button. The door slid away to reveal a single pilot in the cockpit. He had his back to them, unaware of their presence. Weapon X crept closer, put the muzzle of his gun at the back of the chair. The pilot was still yelling with fervour into his comlink, “Boarding team, what is your status? Did you succeed?”

There was a red flash. Sparks flew in this and that direction. A plume of smoke mushroomed gracefully in the small cockpit space. The pilot slumped forward. There was a flaming hole at the back of his chair. Weapon X moved sideways to allow Hunter to pass. Grinning, he spoke to the dead pilot, “No, sir. We lost.”

Back aboard the Bad Example, the rest of the crew heard a voice over the speakers. It was a mock distress, as if the pilot of the attacking ship was speaking in a higher, unnatural tone of voice. The voice said, “They’re overrunning our ship! Help! Help! They’re killing us! Please have mercy!” After a heartbeat or two, the voice of Hunter Maelstrom returned to his normal tone and rumbled gleefully, “No! You will all die!”

Following that, they heard vibrosword stabbing sounds over the speakers. If there were still attackers hidden aboard, they would be highly, highly demoralised.

Weapon X discovered a jamming device and promptly turns it off while everyone else searched the ship for any other hostile individuals. There were none. 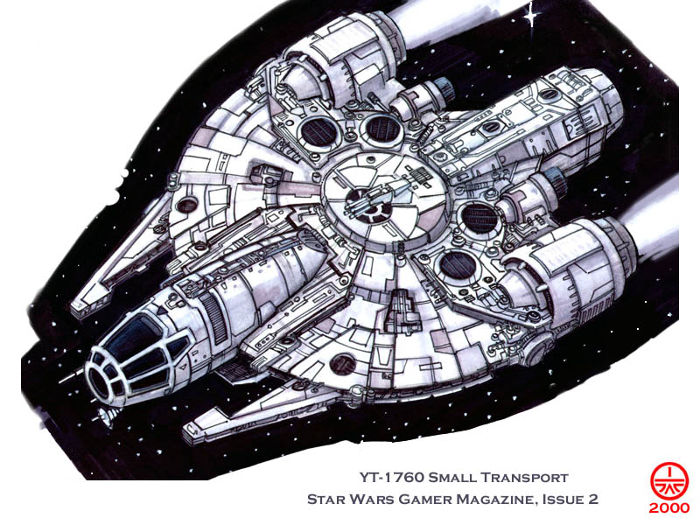 A YT-1760 freighter designed and drawn by Jeff Carlisle

Back in the cockpit, Hunter and Annie discovered that Port Barrow Traffic Directorate was hailing them on comms, and they were cleared to land at Landing Pad 4. It took a short while for Ssssawar to store the bodies of the intruders in the pantry and to be removed perhaps for dinner, and to stow the empty YT-1760 in a crater in one of five moons orbiting Sriluur. Then, the Bad Example headed for Landing Pad 4 where the Traffic Directorate officer informed them that they were expected by their paymaster Tam Gromer of Gromer Imports.

Port Barrow was a relatively small community with buildings made of mostly stone or ferrocrete. It was perched on several split level ledges on the side of a mountain. A river wound its way through the residential, offices and industrial buildings, then transformed into a waterfall at the western edge of the town, that dropped hundreds of metres into a misty gorge below.

Upon landing, the crewmates decided to split up. Hunter, Weapon X and Tickley would talk shop with Gromer, while Annie, Ssssawar and Aden would go to town to find out more about the people who attacked them. Gromer, a middle-aged human with balding grey hair and modest clothes, was waiting with his retinue of loading droids. He was genuinely concerned for their well-being after being told by the Traffic Directorate that the Bad Example was attacked by pirates. Gromer explained that traffic heading for Sriluur, specifically Port Barrow and its region, would be attacked once a week by a pirate group known as “Five Skulls Brigands”.

Hunter allayed Gromer’s fears by telling him that the pirates will not be disturbing their towns any longer.

“Oh,” Gromer exclaimed. “You destroyed all six of their raiding freighters?”

He tried to introduce his personal assistant named Dagg Vane, but there was no one behind him. Gromer complained, “Where is Vane? He’s sometimes late for these meetings.”

Gromer held out a datapad with a thumbprint scanner to seal their deal. After the scan, the banks will release fifteen thousand credits to them in cash. The cash will be ready and delivered to the Bad Example by the time Gromer’s droids finished their work.

When asked what he was doing here on Sriluur, Gromer said, “I am here to bring a better quality of life the the local Weequays of this region. With the import of technology and their working in local mines, their way of life will be elevated to closer be like that of the general galactic society.”

Hunter pressed him about the pirates. He said all he knew is that the pirates had been attacking for several months at a frequency of once a week, sometimes twice. Their standard operating procedure was to wait for ship to arrive bearing cargo to Port Barrow or any community in the region, then execute medium-range jamming. They would approach close to overcome the jamming and persuade the ship’s captain to allow them to board. Then they grab the ship. One or two managed to escape with some damage. Several were destroyed trying to flee. But most were captured by the pirates.

He whispered to them, “Some say they are based at the Oseon system. Aaah! Dagg, you’re finally here!”

Dagg Vane was also a middle-aged human, but was thinner and leaner than Gromer. He wore clothes of similar non-descript style as Gromer’s. He looked at the three spacers: the human, the Trandoshan and the droid. Suddenly, his face contorted in an ugly, undecipherable expression and he let out a loud yell. Then, Dagg Vane fled the landing field.

Hunter gave chase, while Tickley and Weapon X attended to Gromer. He cornered the elder human at a dead end at an alleyway. The starship captain asked, “Why did you run away from us?”

Vane, with an intense expression, told him to get out of his way. Hunter pressed further, but the man was extremely driven. He growled, “Get out of my way. I just want to do my job.”

Hunter stepped aside and the assistant disappeared into the streets.