The third episode of The Clone Wars animated series prominently features the Y-wing fighter defending the Kaliida Shoals Med-Centre. Specifically the Koensayr BTL-B Y-wing fighter, in its intended role as a fighter/bomber. The BTL-B looks much different from the single-seater BTL-A4 variant we saw in the movies. The most distinct feature is that it has full fairings installed, as per the following concept illustration (originally found here): 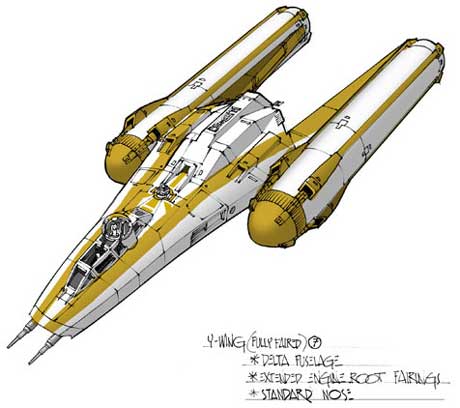 Here’s another angle of the BTL-B. Another feature is the rear gunner’s turret with the bubble canopy. These were originally designed for he original Y-wing designs by Colin Cantwell in A New Hope, but were left out. You can also see that the fairings totally cover the Koensayr R-200 “Ion Jet” engines, even the thrust-controlling vectral frames at the back. 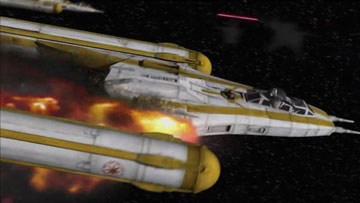 Compare it with the BTL-A4 twenty years later in Massassi Base on Yavin 4, below. They’re no longer new and shiny, though they seemed to have retained their original livery – almost. The ion cannon turrets have been removed. All the fairings covering the module which houses the R300-H hyperdrive motivator and the astromech socket are gone, as well as those covering the engine cross-spars. All sorts of internal components, cabling and conduits are visible from the outside. The only major equipment that appeared to have been completely removed from the fighter is the cuboid-ish gear at the absolute rear of the central module. 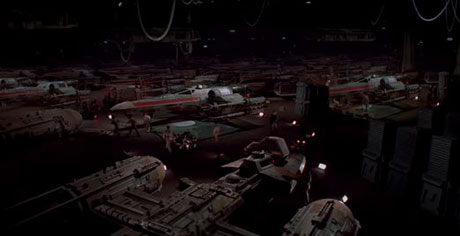 Perhaps the removed gear is some sort of auxiliary power unit. The BTL-A4s seem to required a connection to external power units like such as the equipment seen in the image below. The engines are powered up before the cables from these units are disconnected. The BTL-Bs didn’t appear to require an external power connection before start-up. 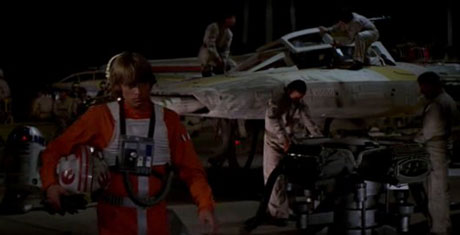 Y-wing construction can be theorised based on what has been shown so far, based on actual aerospace technical processes.

Its primary structure seems to be internal instead of external. Instead of a monocoque or a semi-monocoque structure where its skin is its load bearing component, the weight of all the ship’s repulsorlifts, tactical systems, sensors, computers and other avionic equipment are borne by some sort of truss tube structure. Theoretically, the Y-wing can be flown with no skin on it, though it would make the fighter susceptible to foreign object damage if the deflectors are damaged. Therefore, fairing panels are fixed onto the truss tube-like internal structure giving it its shape as seen in the first and second image above.

Over the years, there would certainly be modifications, like a removal of a redundant sensor package, or the replacement of a flight computer with a larger, newer one. The overall shape of the Y-wing would change accordingly… as long as the promulgators of these modifications (whichever military force or corporation using them) have the money to make the design change and manufacture the parts for the modification. Perhaps, some of them even returned to the original manufacturer Koensayr for modifications. Every official modification made for a batch of fighters, a variant name is given like the two-seater BTL-S3 or the long-range reconnaissance variant dubbed the “Longprobe”.

Some of the surviving BTL-A4s Y-wings, after twenty years, would fall into the hands of the Rebel Alliance outpost on Yavin 4, just in time for their attack run on the Death Star.

Y-Wings in the trench

Ultimately, they get to the shapes we see them in, in the image above. The Alliance – despite materiel support from various local planetary governments – must still be too low on resources to keep things spick and span. Perhaps more equipment has been removed or cannibalized. Fairings which are heavily damaged are discarded without a replacement. Even the engine vectral fairings are missing, which must reduce a fair amount of engine thrust.

Hopefully we get to see an intermediate variant of the Y-wing in later seasons of The Clone Wars.