Before we left the city, the GOKL guys gifted to us Legendary: A Marvel Deck Building Game. 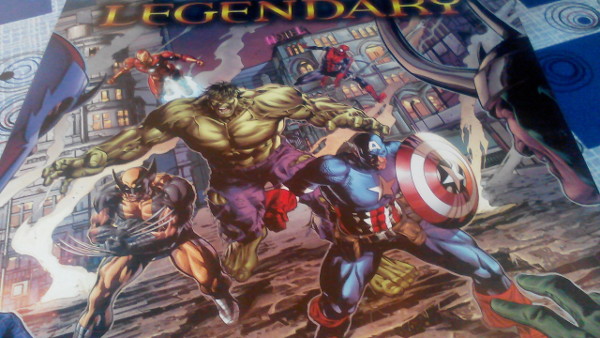 A box of cards

We tried to play it when they brought it over the last time they visited, but it was too late for a game, we only managed one round before they had to leave.

Now, after I’ve located which of the dozens of moving boxes the game was hiding in, Irfan and I finally started playing it.

The concept of the game is simple: the city is in peril from a Scheme of one super-powered criminal Mastermind, aided and abetted by other super-villains and henchmen. You purchase and play a number of heroes (with their abilities) to stop this scheme from coming to fruition. Every round, you flip a card from the Villain Deck which start to occupy city locations. Newer villain cards push older cards further into the city. After being pushed five spaces, the earliest surviving villain will have escaped into the Escaped Deck and is untouchable by heroes. 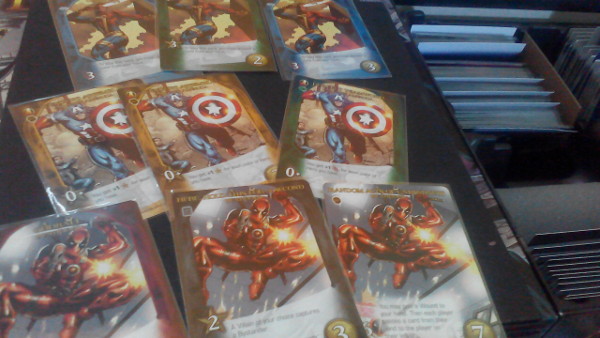 The heroes include Scott, Steve and Wade

When attacked by heroes, the villain’s Fight effect denoted on the card is played. But some villains also have the Ambush and Escape effects. An Ambush triggers when you draw that card from the Villain Deck, and the Escape when it gets pushed to the Escaped Deck. Neither effect is desirable for players. 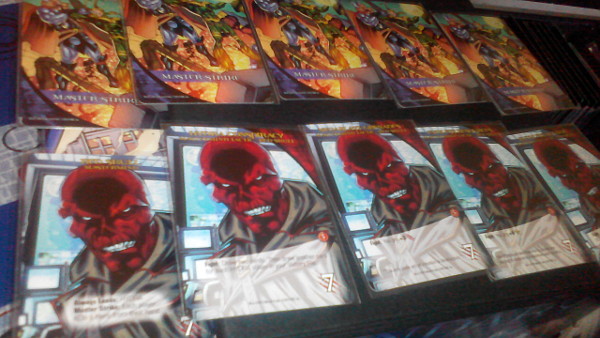 Johann Schmidt and his machinations

Players start with SHIELD agents and troopers, with which the player could either purchase other hero cards or attack. As the game progresses, you are able buy super-hero cards with additional abilities with which you could attack to deal higher damage, or to buy hero cards of higher value to be used in subsequent rounds. But watch out for conditions that forces you to take on a Wound card into your deck. Wound card when drawn just takes up useless space in your hand, thus limiting your actions during that hand.

The heroes in the Hero Deck can be a mix of different heroes with different abilities, from Spider-Man to Deadpool, Storm to Black Widow. Ditto with the Villain Deck. Masterminds – such as Loki, Doctor Doom, Magneto – have different abilities. Schemes also set up special winning and losing conditions across the board. Thus, each game is more than slightly different from the next.

Besides the super-villains, Bystanders, Master Strike and Scheme Twist cards are also randomly shuffled into the Villain Deck. A drawn Bystander card would be taken by a Villain and will need to be rescued. A Master Strike would cause more chaos or damage to players, based on the Mastermind’s ability. For example, the Red Skull’s Master Strike would compel players to discard one hero card in their hand into the KO pile where they usually could not be used again during the game. Drawing Scheme Twists would bring up even more unfavourable conditions for players. Each Scheme card prescribes a different effect for Scheme Twists. After a number of Scheme Twists, Evil Wins! (That means you lose.) 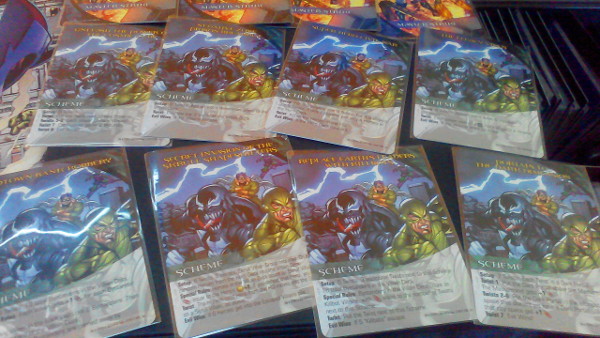 To win you have to attack the Mastermind whose damage level is high, so you have to build your deck with heavy hitters before you could even begin to fight them. Each Mastermind has four Mastermind Tactics cards shuffled underneath it. One attack removes one Tactic card, and the effect of that card is played. These effects give bonuses to attacks and purchases, and are generally beneficial to players. After all four Tactics cards have been removed, the fifth successful attack will defeat the Mastermind and players win!

So what happened when we played?

In the first game, we set up the cards as per newbie set up in the rule book. Red Skull was the Mastermind, whose Scheme was to Unleash the Power of the Cosmic Cube (as the Red Skull is wont to do). Eight Scheme Twists later, he won because we forgot to attack the Mastermind, only the villains that were attacking the city. 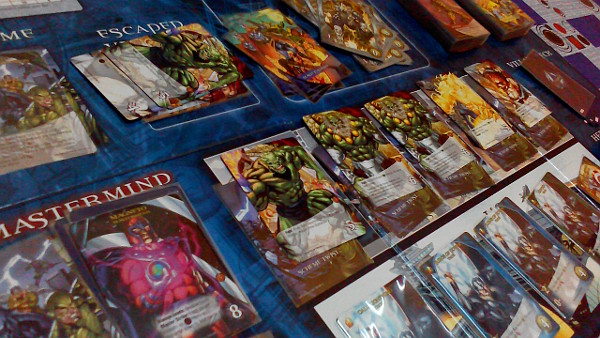 See those infernal Dark Dimension portals under the villains in the city?

The second game, Magneto masterminded a scheme to Open Portals to the Dark Dimension! However, we had all but shuffled Master Strikes and Scheme Twists at the top of the Villain Deck. Portals to the Dark Dimensions (in the form of Scheme Twist card) swiftly filled up the city and when I had a hand that was able to attack Magneto for the first time, he won. (Having Skrulls in the Villan Deck grabbing heroes like the Hulk and taking on their powers and abilities didn’t help.) 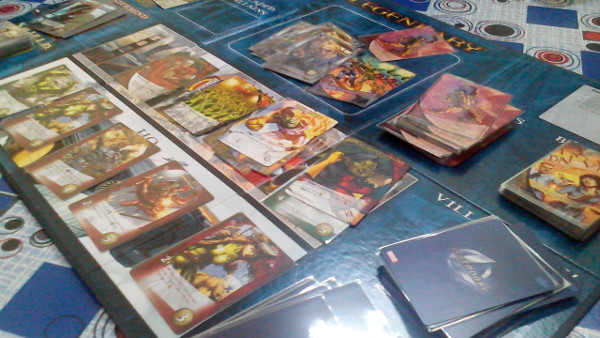 The Bystanders are piling up under that one guy

We dialed down the Mastermind back to the Red Skull in the third game. We also dialled the Scheme down to merely a Midtown Bank Robbery. Johann must really be cash-strapped. This time even as the Scheme Twists that caused two Bystanders to be captured by villains and several villains managed to escape all the way to the end, we kept on hitting the Red Skull, rescuing bystanders and in the fifth attack, defeated him. 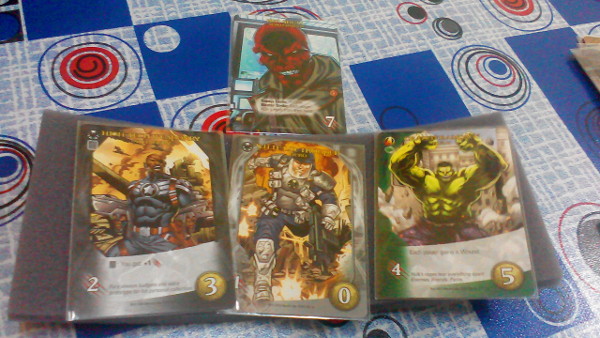 The three heroes that took out the Red Skull

It’s quite a great deck-building card game with a high re-playability value because of the number of combination of Masterminds, Schemes and Villains you can throw at different combinations of Heroes!