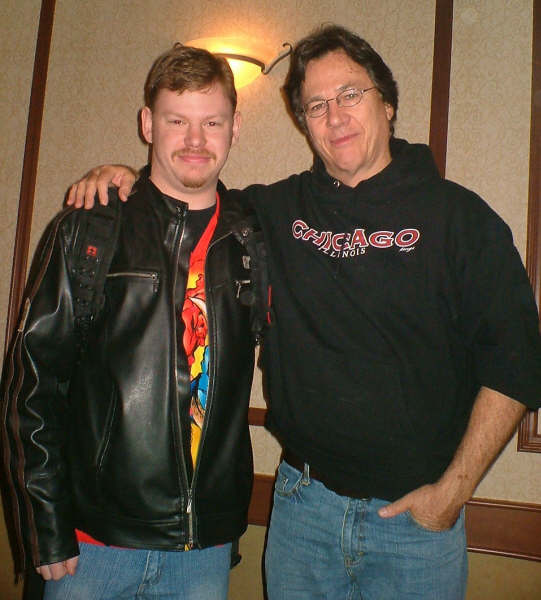 Take it away, Shane:

Today was the Winnipeg Comic Con.

Richard Hatch was the big reason I wanted to go. JUST to get a pic of him and I together and an autograph. I did that very early on in the day, think I was third in line. I knew later he had this acting/improv/rpg character creation session.

I went, thinkin that there was gonna be a million people and I’d get stuck in the back and not even get to interact with him. The room turned out to be very small, and there were only about 50 people. Me, sitting up front. He starts asking why people are here. I raise my hand. Suddenly, I’m talking to Apollo. One on one….I’m mentioning about being a GM and wanting to crerate better stories. He then talks about how RPGing and being a GM is harder than acting sometimes.

We do some warm up exercises, one of which is to get us warmed up, Richard is up on two chairs yelling ‘FRAK!’. We yell ‘FRAK!’ back to him. He then yells ‘FRAK OFF!’….we return the favor. He then yells ‘FRAK YOU!’ and we yell back ‘FRAK YOU’…as best we can, between roars of laughter. He then starts stretching his legs saying ‘It’s the Tom Zarek workout hour’….I laugh till it hurts.

He then starts doing some improv situations with the crowd. First round, I get passed by. No biggie. Second round, passed by. The second round begins and I’m sitting watching, it’s starting to go slow and the people in it aren’t very good. Suddenly, there’s a voice behind me ‘Do you want to go up and be the mafia guy?’…..it’s Richard in my ear. I get up and start the stereotypical mob boss voice. Richard is in tears.

The next improv round, Richard pulls me up again. Before we know it, the two hour time limit on the room is over and the next seminar is going to start. Richard thanks us, and tells me how funny I am. I poo. Right there. Great con, great day.

If you ever get the chance to meet him, DO IT!