WALL-E, directed by Finding Nemo‘s Andrew Stanton, is indeed according to Ben Burtt, “R2-D2 the movie “. And as any Star Wars fan knows, Burtt has been the Academy Award sound designer for all the Star Wars and Indiana Jones films, as well as a writer for the Droids cartoon TV movie The Great Heep which featured R2-D2 and C-3P0. So, there is no one more skilled than him in crafting mechanical sounds that elicit emotions in viewers.

WALL-E is the acronym for Waste Allocation Load Lifter – Earth-class, a trash management robot designed to clear the immense volume of garbage from an uninhabitable Earth, and left behind when all Humans have evacuated into ships in space. We also see two WALL-As – Axiom-class robots later in the movie.

However, it’s been seven hundred years since he first started his job and all the other WALL-Es are damaged beyond repair and dead. Over the course of seven centuries, the remaining WALL-E is still doing his job, has developed sapience, emotion, and a hobby of collecting interesting trinket. Also, he has a fondness for his pet roach who follows him around, keeping him company on his job rounds.

Light spoilers will follow. But it’s not as if you can’t figure out what’s going to happen just looking at the trailers.

One day, while working a ship lands and deploys a floating, white, egg-shaped object which turns out to be a robot named EVE, who already appears sapient and enjoys Earth’s open sky before going about its work scanning the trash heaps and derelict buildings for something. Among WALL-E’s stash at home – an immobilized truck – is a VHS copy of Hello Dolly! which he watches very night and enjoys the romantic aspect of the movie. EVE, being a robot of female personality, attracts his attention immediately. 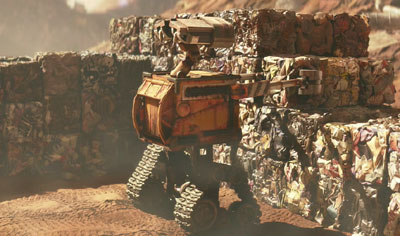 But after WALL-E shows EVE a growing seedling, she goes into automatic mode, grabs the plant into her internal storage compartment and floats dormant waiting for her pickup. He does everything he can to keep EVE comfortable while she’s disabled. When the pick-up arrives, WALL-E attempts to stow aboard the ship not willing to let his love out of his sight… which leads him to an adventure in space and rediscovering Humanity. In the process he causes a chain reaction that creates an upheaval, and ultimately brings an end to status quo among the society of Humans and robots there, all because of love.

Just like any Pixar movie, WALL-E is highly enjoyable with a storyline that is easily understood as well as addressing some issues such as monopoly in capitalism and transhumanism in the form of a Humanity pampered to the extreme by robots. All in all, a solid science fiction adventure story. However, I was disappointed that they did not expand on whether WALL-E’s sapience was pre-programmed 700 years earlier or he developed it naturally by existing far longer than he was designed to. I liked the fact that they showed many other inactive WALL-E units strewn about in the desert landscape, and he probably cannibalized them for spare parts over the years. 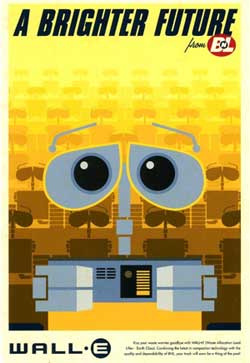 WALL-E’s pet cockroach stole almost every scene it appeared in. It appears that almost a thousand years from now roaches have an increased dog-like intelligence, invulnerability and a longer lifespan. There’s no way the roach could learn what it appeared to know over the course of a year. Also, it got squished by WALL-E twice in the movie and came out of it undamaged! Milquetoast the Cockroach would be proud.

After the movie ended I really hoped that the cockroach and its kind would be intelligent enough not to be a pest to Earth’s returning populace or it’d be promptly exterminated by them.

The robots of the starliner Axiom are great characters in their own rights. After 700 years, you can see a discrepancy of design and technology between them and WALL-E. While WALL-E uses servomotors to move his parts and travel using treads, the Axiom robots can float about on anti-gravity (though not all of them, some still use rollers or are mounted on ceiling rails), can emit forcefields, have parts that hinge on invisible forcefields and are all more antiseptic clean-looking (except for the WALL-As for obvious reasons). Finally they all seem to have been manufactured with an artificially sapient mind and have different personalities ranging from the sinister to the neurotic.

The Axiom‘s welder robot BURN-E will be appearing in an animated short for the WALL-E DVD later this year, and I hope we get to see more stories featuring the rest of them.

Also, I hope to see a definitive happy ending for the cockroach.