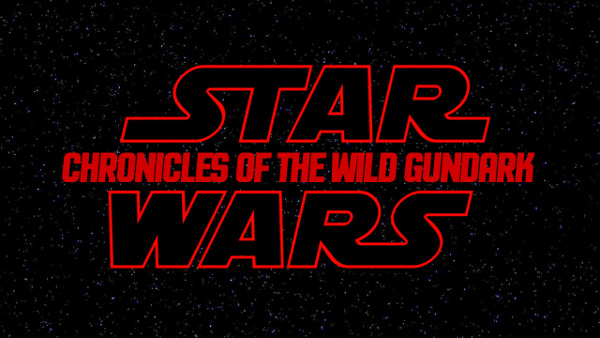 Chronicles of the Wild Gundark

A Star Wars fiction, based on the Chronicles of Wild Gundark RPG campaign.

It all began when the crew of the Wild Gundark was commissioned to deliver twenty tons of bantha milk to the backwater town of Prosperity on the cold tundra of the planet Dellalt. The job went without a hitch, apart from the little tussle with the crew of an Imperial customs corvette (the two-pronged, sleek affair that many tramp freighter captains love to hate) in the Vaxal system. Unfortunately, the result of the little encounter was the spillage of approximately half of the delicious blue milk because of gravity plate failure. Things could have turned out real bad for them, but instead their contact, a imposing and tattooed Herglic named Dapp only paid them fairly in half and left peacefully.

There was only one thing known to them as they left Dellalt: They had taken on a passenger, Tell Sabarin, a stately and noble-looking person, who paid them a huge sum of twenty thousand credits to convey himself and his cargo, a cryogenic bio-containment crate, all the way to his homeworld of Kuat in the Core Worlds.

But there were two things unbeknown to them.

And never came back out. 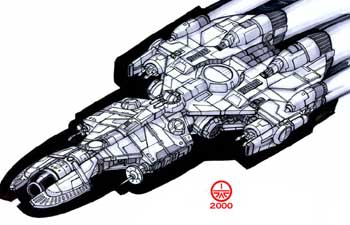 A clean, shiny, pristine ship sailed through hyperspace, its crew dark-clad and on a dark mission. The pilot and copilot mulled over a datapad handed to them mere hours ago at the Prosperity Landing Field on Dellalt. They discovered that their quarry had left Dellalt upon an YZ-900 tramp freighter named Wild Gundark, on route across half the galaxy to the Kuat system.

They also learnt that their contact on Dellalt had taken his own initiative and planted something aboard their ship when they were berthed on the insecure landing field. All they had to do was transmit on a certain frequency and their quarry would be dead. How many other people would die with him? Was it worth the risk?

He considered. He weighed. He took it.

He depressed the button on the datapad with his thumb, and the signal was sent via hyperradio.

Far ahead of them, the Wild Gundark was in no hurry along the Perlemian Route. Within the ship was Captain Nisa Dyaton, first mate Similiv Zalimort the Kerestian Bounty Hunter, and gunner Aleic Karnsky. In the lounge, sitting by himself was their passenger, the Kuati Tell Sabarin, a Human who appeared to be in his late forties. Tell’s cargo, the cryogenic bio-containment crate, was stowed beside some empty crates in the hold.

If someone were to be in the hold at that precise moment, they would have seen one of the empty crates rattle, and then start to open. But since no one was at the hold, it took a loud, blaring intruder alert klaxon to rouse them all.

Aleic and Similiv dashed into the cargo hold, and what they found did not amuse them: A droideka. A droideka was a single-minded combat droid, with dark bronzium armour and walking precariously but never faltering on its three stubby legs. It had two heavy arms, but in place of hands, each forearm ended in twin blaster cannons. Additionally, this one had, strapped to its chest, a pair of thermal detonators.

Urgently, Sim reported this to Nisa taking cover from the droideka’s blasts. Knowing there was no time to try to defeat the droid, the red-haired captain prepared to jettison the cargo bay into space, and hoped they would still get paid despite losing their passenger’s cargo.

It was then that an unnoticed Duros popped up from another supposedly empty crate with his hands up, saying with some measure of fervour, “Okay! You got me! I stowed away! Just don’t shoot me!” The Duros realized that the skirmish had more to do with the droid than him and quickly dispatched, from within crate, a suddenly appearing Jawa, who was a metre in height and managed to hit the droideka with his ion blaster. But despite the spectacular display of blue lights, sparks and the smell of ozone emanating from the battle droid, the shot failed to disable the hostile droideka, which started to turn his cannons toward the stowaways. The Duros unholstered his weapon and let loose a single bolt from the heavy DL-44 blaster pistol.

The blaster bolt tore the droideka’s head off in a flash of sparks and billowing smoke.

But there still existed the threat of the two armed thermal detonators. Similiv ran for the droid husk and grabbed one of the blinking detonators. Nervous, he slipped. The grenade bounced off one hand and into another, slipped, bouncing off the other hand and finally the Kerestian grabbed it in mid-bounce, and deftly switching off its timer. He sighed loudly in relief.

The Jawa, simultaneously, scurried eagerly to the fallen droid, picked up the other detonator quickly, polished it off with his sleeve, switched it off and in a moment, the explosive swiftly disappeared into his robes. Subsequently, he felt rough hands grabbing his brown robes and dragging him away.

Aleic and Sim hauled the two stowaways into the lounge where Nisa awaited them with Tell Sabarin. Similiv tossed the disarmed thermal detonator at Sabarin, who caught it with a display of surprise and fear on his face. He said to Nisa, “We have uninvited guests. The bad one’s been neutralized. These two however…”

The Duros and Jawa identified themselves as Groo McShae a sensor technician, and Wayang Kulit a scavenger specialising in droids (and who couldn’t stop fiddling with the droideka’s carcass), respectively. Similiv went back to the cargo hold by himself to inspect the damage. Groo explained, “We stowed away aboard your ship while you were at Prosperity looking for passengers. We didn’t know we weren’t the only ones, though.”

“And why did you stowaway aboard our freighter?” Nisa asked dangerously, fiddling with Groo’s own confiscated DL-44.

Groo rubbed his hairless, dark cranium and explained, “The Core Worlds… we were looking for a way to the Core Worlds, so we could get jobs. Maybe, Coruscant or Chandrila. Brentaal wouldn’t be too bad. But we spent weeks on Dellalt without any ship willing to take us on as passengers.” He glanced to Kulit. “So we thought we’d do it quietly with your ship.”

Similiv returned from the hold once more with a cylindrical device in his hands. It had some wired forcibly removed from its open panel. “A sensor jammer.”

“The droideka’s, Cap’n. It prevented us from detecting the droid itself and, because of their proximity to it, the stowaways as well. Luckily you installed the motion sensors on the hold’s gravity plates last time we were at Nar Shaddaa. Or the droideka would have blown the ship in half in hyperspace without us having a clue to it being there.”

Nisa took a deep breath. “Should I jettison you both into space?”

There was a long, dark pause. Finally, Groo stammered, hoping his next words would not be his last, “Perhaps.. perhaps we could be of use to you, captain. I am a skilled sensor technician, and my companion works wonders with droids.”

Similiv raised an eyebrow at the captain while Aleic gestured to the airlock, asking silently if he should open the inner hatch.

“You could test us!” Groo exclaimed in desperation. “Before you leave your next destination, I guarantee you that all your ship sensors would be at least 200% its current efficiency! How do you like slicing through the field put up by the jammer like the one the Kerestian found? Or at the very least, your sensors would detect the jamming field! If you don’t like the modifications, you can space us. If not…” Groo kicked at Kulit, who had one of the droideka’s photoreceptor already detached and hanging by a wire. “Some support, if you don’t mind.”

“What he said! Hee!” Apparently the Jawa was too engrossed in his work to care about staying alive. Groo winced and expected Similiv and Aleic to throw them into the airlock.

“You,” Nisa said as she got up and approached Groo, her face mere centimetres from his, “got yourself,” Groo felt a blaster being shoved into his right hand, “a deal.” Groo looked down to see his own blaster pistol in his hand. He managed a smile at the captain and thanked her profusely.

Nisa turned to Kulit and said, “Your first assignment is to turn that droideka into a security droid for this ship, to keep more stowaways out.” His attention still on the droid head, he gave a thumbs up to Nisa.

“However, If I learn that any of you are a threat to the well-being of this ship, its crew or its clients, you’ll be sucking on vacuum in deep space.”

Inspecting the unexploded thermal detonator, Sabarin identified the emblem of the Third House of Kuat upon its globular housing. It was evident that the explosive was intended to kill him and destroy his cargo, and whomever happened to be in his vicinity. He explained to the crew that there was a fight that he was involved in and stressed that it was not theirs. All they had to do was deliver the cargo, get paid and depart peacefully from Kuat.

Nisa warned him if there were any more surprises the crate would be jettisoned, no matter what the consequences. Sabarin shivered at the prospect as the crew went back to work. Similiv showed Groo where the sensor palette and the control circuits were.

The rest of the journey proved uneventful.

Steeped deeply in pseudo-feudalism, the Kuat system had several densely populated planets and moons, just like many systems in the Core. The Noble Houses of Kuat vied for power in the corporation known as Kuat Drive Yards which was a major supplier of military materiel to the Galactic Empire.

The Wild Gundark reverted back to realspace smoothly at the edge of a cloud in space. But it wasn’t a cloud: it was thousands of ships of all sizes, active and inactive in various orbital distances from the surface of the fourth planet of the system.

Nisa pulled on her control yoke and told her passenger (and her wary crew), “Let’s get to work.” Similiv turned to the comm board as the ship’s nose turned the way Nisa directed it.

And she discovered that a colossal object blocked her entire forward viewport. Something grey. Something wedged shaped. Something over a kilometre and a half in length. Something ominous.

It seemed to them that the ship’s cabin temperature dropped several dozen degrees.