Today Anya played Agent Walker of the town of Meepville. I brought Cortex Prime rulebook with me to KL to read, and upon reading some of the pages, expressed a wish to play. So, I came up with something simple for her to play solo. I also created an NPC for her who might seem familiar, but wears a fake thick mustache. 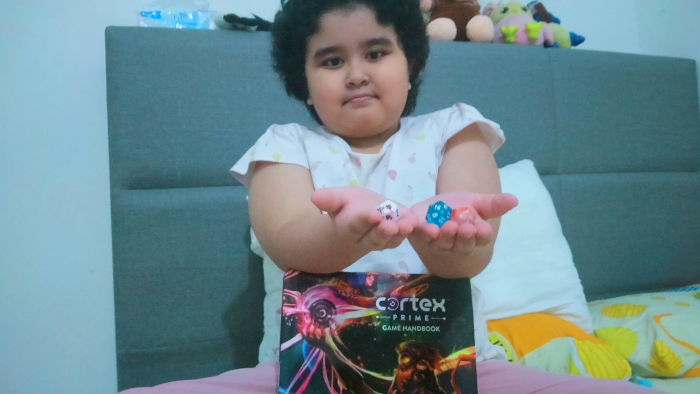 The d20s are her Power Points

Agent Walker’s superior Agent Zero assigned her to investigate a missing school bus with schoolchildren aboard. The bus disappeared along the forest road in the woods on the side of Great West Hill.

Firstly, the young agent needed a set of wheels, so she went to her parents’. Her mom, Lily, was sweeping the porch when she arrived. She asked to borrow her Lamborghini, but her mom gave a resounding NO. She wanted to explain further, but was unable to her as her mission was a secret.

After, Walker used her agency-issued tablet to book a Grabcar rideshare, which she initially mistook for Grabfood. The Bezza driver who arrived was a 40yo man named Irfan (no relation) with a huge mustache.

With Walker’s information, Irfan drove her to the desolate forest road where the bus disappeared. Surrounded by tall trees and huge clusters of fern, she was unable to find any clues in the immediate area. 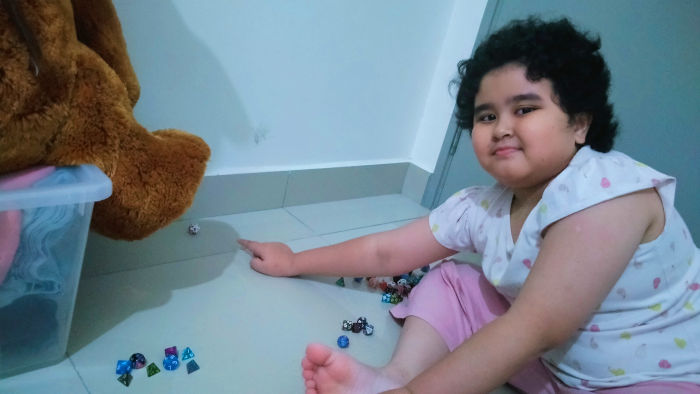 Anya says that dice represents her

So, she called Agent Zero for help, who immediately supplied her with satellite data. Spending some time studying the data while Irfan waited, Walker spotted the exact place where the bus vanished. The driver wanted to leave but she convinced him to stay and help her. So then, Irfan retrieved a baseball bat from the back of his car.

They both headed to the exact spot as per the satellite data. There, Walker caught sight of the bus tracks which had turned onto the wet soil, following a forest trail and then disappeared at a clearing deep in the woods. She was vexed at first. Then she noticed a lever hidden in a clump of ferms. She pulled it & the clearing sunk into the ground with a whine of quiet hydraulics.

After a quick call to base, Agent Zero dispatched other agents to assist her but the nearest team was at least 2 hours away.

It took awhile for Walker to convince Irfan to help her. For the benefit of the abducted children, the Grab driver agreed. They both descended via iron rungs into a cavernous space below.

Ahead, out of line of sight from the yawning portal above, there was an empty bus. There was no sign of violence, no blood.

The other side of the bus was a closed metal door. Walker tried to pull on it, but it did not budge. She knocked on it to no avail. Suddenly, the door creaked open and guard emerged. He had a taser on his belt.

There was a taser gunfight, and Walker drew fastest. The guard fell unconscious. See video below!

Walker and Irfan sneaked through the door. They saw the abducted schoolchildren incarcerated in a steel cage. Walker told them she was there to help them escape. However, Walker was unable to crack the cage’s door lock.

It was then that a klaxon rang, screaming, “Intruder alert.” The duo retreated while pursued by four guards. Having a fair lead over their pursuers, the duo reached Irfan’s Bezza and drove away. As they headed down the hill, Walker devised a plan.

Using food dye as fake blood, the duo staged a car crash not too far away from where they had parked. Irfan was not happy, but he went along with it. From the bushes, they saw the four guards head to the car to investigate.

Meanwhile, they sneaked back into the hidden base. The unconscious guard was still out cold, so as Irfan tied him up, Walker stole his uniform. Now with two tasers on her belt, she climbed out of the portal and headed headed out to the staged crash site where the other guards were.

They stood at order when she arrived. She commanded the other guards to go find “the intruders” who was now on their way to in Meepville. Strangely enough, they easily complied. 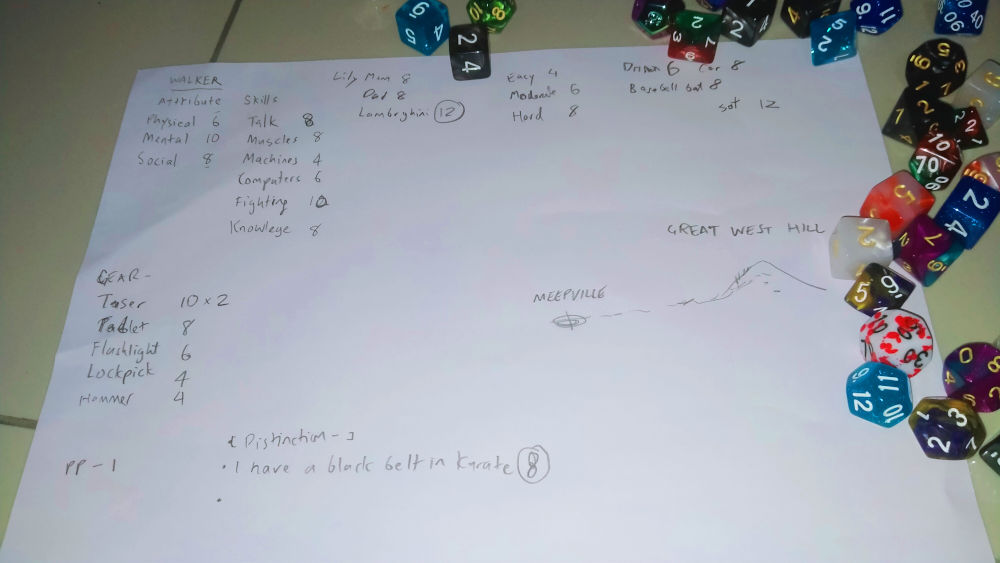 We will transfer these stats to a printed charsheet later

Returning to the Irfan, they entered the prison room. The leader, a woman, was there waiting for them. She looked exactly like Walker, calling herself Stalker. Walker was shocked. She did not know she had an evil twin!

Stalker promised that she would blow up the kids if Walker didn’t retreat. In her hand was a remote detonator.

So, Walker relented. Walker and Irfan returned to the forest, and headed for the road. At the road, they both saw other agents arriving, providing them with better weapons and gear.

There was a quick briefing. Together, they moved to the underground base to accomplish their mission. Sneaking back into the prison room, they found Stalker and the abducted children gone. A number of agents discovered an escape tunnel to a vehicle bay on the far side of the Great West Hill. There was no sign of any of them.

Walker thanked Irfan for his help. His Bezza was not damaged at all as it was only a staged crash. And then Walker and her team headed back to their base for a debriefing. 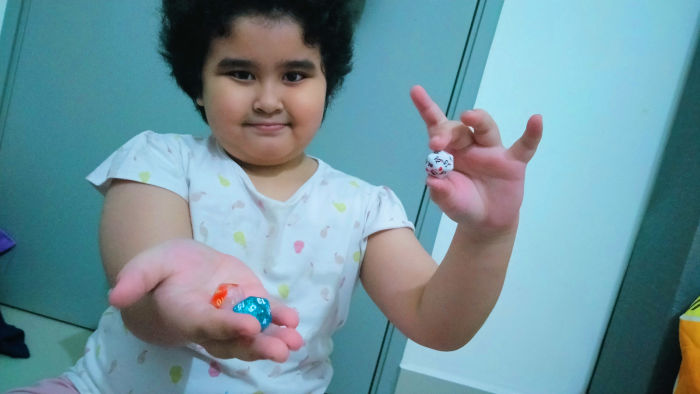 She really loves her Power Points