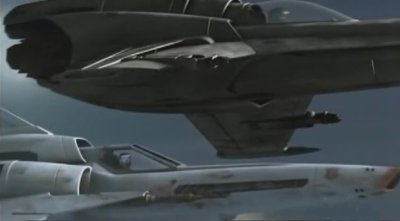 The stormy clouds of the gas giant were where the rag tag fugitive fleet was undergoing refuelling operations last week in Battlestar Galactica.

But Captain Kara “Starbuck” Thrace patrolling the skies of the planet in her Viper caught a glimpse of a Cylon Heavy Raider and chased after it. Without invoking spoilers, the question would be whether she was hallucinating or not. If she wasn’t then a whole set of new variables can be introduced to the outcome of the episode, entitled “Maelstrom”.

As the viewer, we saw Starbuck’s point of view of the bloodied child in the cockpit.

We also saw the silhouette of the man in the room outside her cockpit as she was flying deeper into the storm.

Let’s not get into the dream sequence. (I hope the paint was non-toxic.) 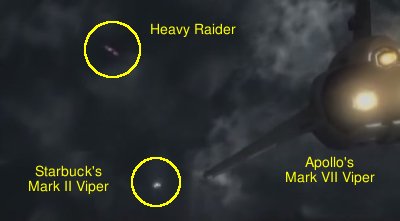 The shots of the Heavy Raider were for the most part in her point of view… until we see this shot where the point of view was behind Apollo’s Viper. This is definitely not Starbuck’s point of view – heck, it’s too far out to be her POV. In fact it’s more of Apollo’s:

In the current age of visual FX pre-visualisation where everything is preplanned in a single shot, the questions will now be (1) what was it doing there, (2) is even a Cylon ship, and (3) why didn’t we hear Apollo say he saw it?