Episode 08 On The Trail of Dad

Previously on Edged by the Empire…

Irfan had 35 XPs, so he blew it on a couple of more Talents, namely a second Skilled Jockey, a second Galaxy Mapper and Improved Dead to Rights. He was free of any Obligations for this episode after rolling an 81. (His Obligation: Family is 30 and Giin’s Obligation: Bounty is 20). Finally the Destiny pool was 2 light side and one dark side. 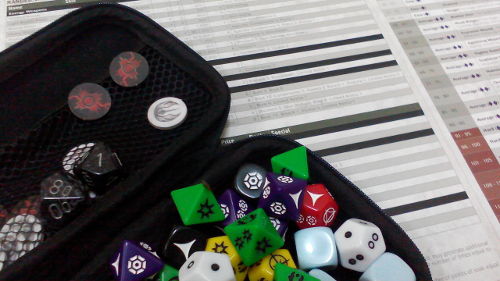 On his homeworld of Blue Nirvada, the young smuggler Hondo Pash, the captain of the Lava Jaeger has discovered that both his parents, long thought to be dead, were still alive and appeared to be mortal enemies. His mother was Doro Pash and his father, the Imperial Admiral Keargan Kanu. Upon Hondo and his armoured mercenary guard Giin Lawquane rescuing his aunt Zosy Pash from Imperial agents, Zosy revealed that it was a trap to capture Hondo. However, when the trap was sprung, Admiral Kanu captured Hondo’s 9-year-old sister Yuzy instead, making the jump to lightspeed in a Lambda-class shuttle in space…

Snow swept through and over a black caldera – known as Obsidian Island – that formed a ring-like atoll on the glistening icy, white plain surrounding it as far as the eye could see and the blizzard would allow to see.

Three figures walked through the snow in the open streets of the city in the inner rim of the caldera. Hondo, Giin and Aunt Zosy headed for the Lava Jaeger after admitting local Trandoshan police officer Klikwask – who was badly injured during Zosy’s rescue – in a bacta tank at the public infirmary.

“What do we do bothth?” Giin’s eerily modulated voice said through his full helmet.

They reached Platform 127, entered the facilities and headed up the ramp into the black and yellow YT-1300 waiting for them. The ship’s astromech droids R2-8D8 and R5-K2 whistled sombrely as they boarded.

Hondo tried to use the communications console to lock on to the frequency of Yuzy’s comlink. But from the equipment, it was evident that the comlink was turned off or, more likely said Giin, out of range. (A single success in Computers confirmed this.)

Artoo whooped and beeped, I know what to do!

“What?” asked Hondo. The green-and-white droid with a bronze dome rolled to the dejarik holoboard and activated it.

“We don’t have time to play!” snapped Hondo, then putting his head in his hands.

After a long pause, Giin said, “I might be able to help, but thith would mean me expothing myself to danger. I don’t do thith for jutht anyone. Thtay here. I’ll be back thoon.” The armoured figure slipped back out of the freighter. Hondo realised he had never seen Giin’s face. He also suddenly wondered why the character spoke with a lisp.

Soon, Giin was back and told Hondo, “I’ve been athking around.”

“Around.” Giin said firmly. “Word is that there is a thecret cache of gear and weaponth established by an Imperial offither named Kanu. Thith cache ith in the Kabal, a neutral thythtem in the Mayagil Thector. Not many know of thith, but now we know of thith.”

“I can’t go,” said Zosy. “Go get my sister and niece. Bring them back safely.”

Zosy left the Lava Jaeger rolling a barrel of meiloorun ice cream with her. 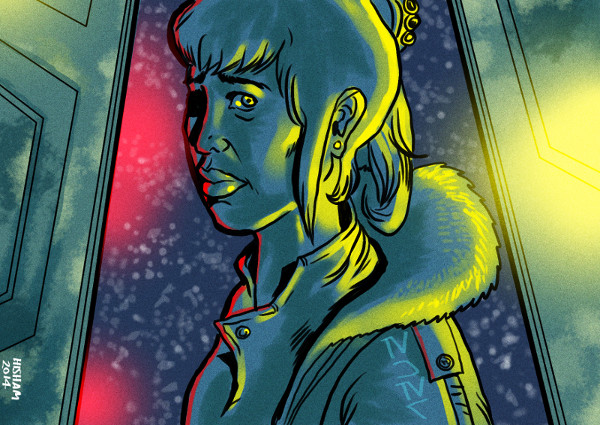 The dark skies were clearing up when the freighter burst out of the caldera. As the ship sped away from low orbit, Hondo attempted to make the calculations for the jump to the Kabal system.

Suddenly, a loud proximity warning blared. Two hill-sized asteroids had collided with each other two hundred klicks away. A cloud of rubble consisting of jagged, speeder-sized debris was headed their way. Giin was aghast, but the experienced Hondo managed to quickly make the calculations. Just before they could be shredded by the debris, Hondo pulled the lever and the Lava Jaeger jumped into hyperspace. (Two Setback dice were neutralised by Hondo’s Galaxy Mapper Talent, and a Triumph was rolled!)

When they reverted back to realspace off Kabal, they were contacted by Shoribus Traffic Command. When asked of their business, Hondo told the traffic control officer that they were there for a holiday vacation. (A Deception skill success!) Navigational landing data guided them to the capital city of Shoribus where they landed on platform 712 (and a coincidence that the digits were similar to platform 127 on Blue Nirvada.) 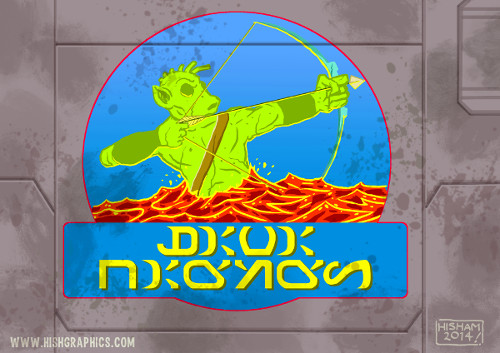 Nose art of the Lava Jaeger on the side of the cockpit.

After Giin dealt with and paid the Port Authority droid, Hondo and the mercenary headed out into the city. (Hondo rolled a Success in Streetwise.) They were both directed to an old retired human scout who was a regular at a tavern called the Crazy Sanrafsix.

The Crazy Sanrafsix was nestled between two buildings along a pedestrians-only street that had a bubbling stream running through its length. The tavern was outdoors, its tables and bar beneath half a dozen tall trees with large, dense leaves. Once in a while a dead leaf drifted down onto the floor or a table or a tavern patron.

The grizzled scout, known as Kanner Ra’an, said, “If you’re talking about the Kanu I think you’re talking about, then what you need is 500 klicks to the west, along the Skolaris Cliff. Go past the Shoribus Hospital, through the Arboretum and out the Western Gate.”

The duo rented a pair of military surplus speeder bikes – grey-painted bodies with blue lines – for their search to the west for a hundred credits each that Hondo paid for himself.

They were riding the speeders past the Shoribus Hospital when a huge explosion rocked them and blew a large hole in the building façade, obscuring everything with ash and dust. Hondo and Giin successfully braked in time to see injured hospital personnel and damaged medical droids staggering out of the hole.

Hondo saw a dark-skinned woman in a doctor’s smock was coughing as she called out, “Check your team-mates! Look for survivors!” Behind her, a humanoid silhouette moved in thick plumes of dust. Its eyes were glowing red. There were cybernetic attachments on its head, chest and arms. Some sort of weapon was implanted onto its right forearm. A cyborg! And it was aiming at the doctor.

“Giin!” snapped Hondo, who accelerated his 74-Z speeder, swept past the doctor, skidded to one side and slammed into the cyborg, which came apart in the midsection. There was only sparks, smoke and electrical discharges along its torn machine components. (Successful Pilot-Planetary roll even with a Setback die.) Giin had been prepared to shoot the cyborg with his EE-3. He shrugged and stood down, holstering his blaster.

“Thanks,” said the doctor. “You saved my life.”

“We’re trying to help the victims of a self-styled Sith Lord who calls himself Darth Cassed. He was abducting as many people as he could, from farmers to bounty hunters, and turning them into mindless cyborg killers for his army. He came several months ago, but he disappeared as quickly as he left. There are hundreds of these cyborgs left wandering the wilderness. Some can still be helped. Some are too far gone.”

“The explosion?” Giin asked, walking close, studying Hondo to see if the smuggler captain was hurt.

“The explosion was this cyborg’s comrade’s self destruct. Thanks again. Now excuse me, I have wounded to tend to.”

The doctor rejoined the chaos of the burning hospital.

As the two Aratech-manufactured speeder bikes flew westward, there was a single figure in the alley watching them: a black-skinned Sakiyan, with an enhanced cybernetic eye, cyborged right arm and visible scars on his head and neck. He smiled menacingly, tapped his ear comlink and said, “I found him. He finally showed himself and now I will take him in.”

Zenep Tchek, who survived the blaster cannon barrage dealt by Hondo on Naboo, tapped his comlink off; and with a sweep of his grey cloak, disappeared into the dust. 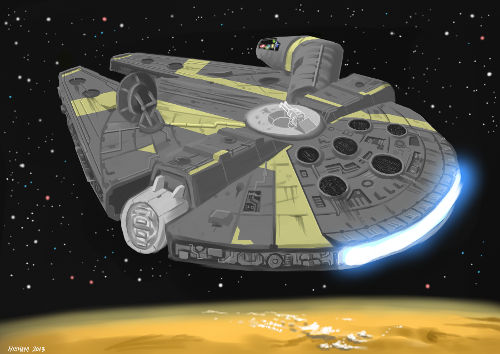 Home is where the meiloorun ice cream is…