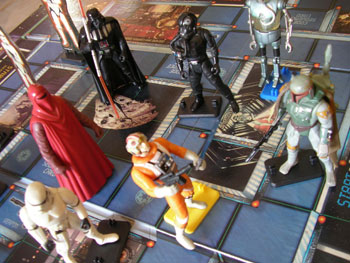 They’re just posing for a photo

Once upon a time, Sila brought back with her a Star Wars: Escape the Death Star Action Figure Game, which is actually a board game with two sets of rules (an easy and an advanced rule) as well as two Hasbro action figures, a Luke Skywalker in stormtrooper disguise with removable helmet and lightsaber, and a Darth Vader figure with removable helmet (complete with exposed back of head) and lightsaber.

It must have been ten years since, and I’ve never actually played it until recently. Because Irfan wanted to try it out. However, I realised that the easy rules were too easy and straightforward, and the advanced rules were too complicated for Irfan.

So the gamemaster in my blood took over, and I not only modified the rules so that the difficulty level of the rules are something in between and it’s something Irfan can play and enjoy. Also, I can integrate what Star Wars action figures I had with me into the modded rules that I came up with. It took several runs with Irfan to refine the rules, but I think I’ve almost got it. Hopefully this game will also teach Irfan the basics of role-playing.

Here are the new rules:

Combat begins when Luke walks or run into a position 3 spaces or less from an enemy in direct view. Here is the combat procedure:

For any piece to succeed in hitting an enemy with a blaster or a lightsaber, a player makes an attack roll:

Alternatively, Luke can attempt to escape by rolling his move during combat. The player has to wait his turn to disengage from the battle. However, the running bonus does NOT apply, so only 1d6 is rolled; never 1d6+2. The downside of this is if Luke is 1 space away from the enemy, he could conceivably roll a 1 and end up only 2 spaces away. The enemy rolls next and he has a free shot at Luke! 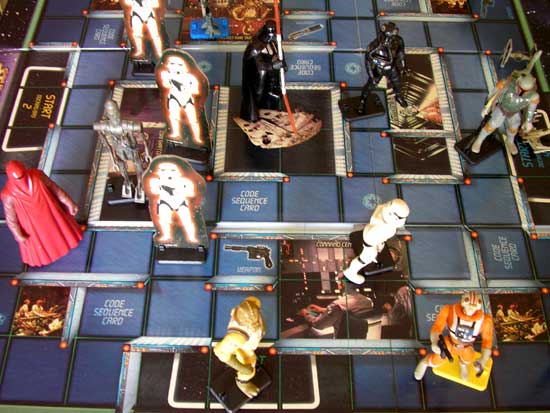 The theatre of operations

Okay, that’s as far as I’ve gotten. Obviously I also need to tweak the rules for more than one player… and maybe sneak in the rules to hotwire a blast door lock, or repair a droid, or access an encrypted computer, or throw a thermal detonator, or use a medpac to treat your own wounds. The possibilities are endless.