I was finally able to run another role-playing game session for my students for an English Language speaking exercise, the first for this semester. Probably no other games will be run because it is already quite late in the semester for other sessions. Students will be concentrating on their finals.

Although it was technically a Force and Destiny game, we had character types from Edge of the Empire too, thanks to the Legends of the Galaxy pregenerated character sheets.

Jungle in the Sky

The GALACTIC CIVIL WAR rages
across the Empire! Thousands of
suspected rebel agents have been
rounded up and imprisoned by
the IMPERIAL SECURITY BUREAU in
secret prisons across the galaxy.

Many innocent citizens have disappeared
because of the Empire’s evil wrath,
including SENATOR GAR LODOS
from the DURO system.

With little time to spare,
the REBEL ALLIANCE has sent
an extraction team to the
south pole of the planet CANTO BIGHT
to rescue the senator…

A Lambda-class T4 shuttle dropped out of hyperspace and an asteroid the size of a mountain stood in its path. The pilot Malea – a Jedi Warrior/Starfighter Ace – was able to swiftly dodge out of its way (thanks to Enhance power that boosted Piloting – Space skill with a Force die). Her passengers, Byt the Twi’lek Technician/Outlaw Tech, Koogik the Rodian Explorer/Big Game Hunter, Merick the Zabrak Jedi Guardian/Armorer, Salporan the Wookiee Technician/Outlaw Tech and Vonnick the Gand Bounty Hunter/Survivalist were nonplussed by the event and went back to whatever they were doing.

Meanwhile the planet Canto Bight shone like a beacon beneath them. 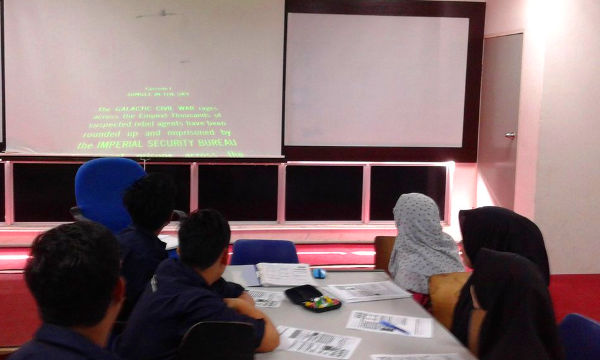 There was a Star Wars crawl, but no music because of technical difficulties.

Traffic control contacted them and Salporan answered them in his native Shryiwook language, telling them that the shuttle Bobo requested permission to land at the southern region of the planet. (For some reason, even with the Setback dice the Deception worked.)

The Bobo flew toward a small with a landing field called Ketri Hill. The shuttle landed and the team disembarked into the frigid morning air, their breaths billowing visibly and blown away by a light wind.

A stormtrooper approached them as they were about to leave the landing field. He said, “Halt! Civillians are not usually allowed to land here. What is your business here?”

Merick stepped forward and told him that they were expected and invited by the Governor here. (Another successful Deceit check with Setback die!) The armoured trooper stepped aside and told them, “Welcome to Ketri Hill. Enjoy your stay.”

After they were alone, they considered their first move, which Vonnick immediately insisted to be looking for food. He quickly took the lead and led the team on a merry chase throughout Ketri Hill streets. He came to a stop at a Gand street vendor and started digging in. (Success in Streetwise with…) However the food was inedible for non-Gands, toxic even (…some Threats). 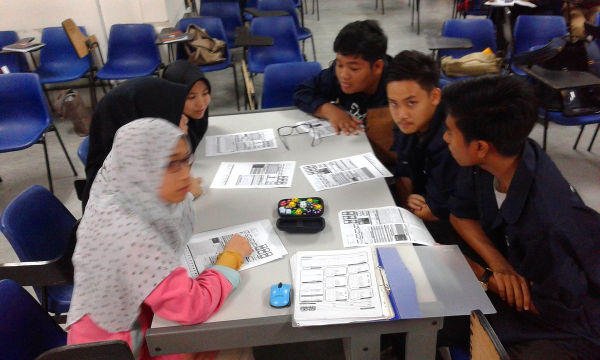 Amani as Byt, Faeezah as Koogik, Nailah as Malea, Adha as Merick, Saiful as Vonnick, Ridzuan as Salporin

“Sorry, guys,” said Vonnick as he slurped his soup through a hole in his mask.

After Vonnick was sufficiently full, Koogik – ever the Explorer – led the team through the town, shop to shop, cantina to cantina, asking about a secret Imperial prison in the vicinity of Ketri Hill. However, (thanks to a failed Streetwise roll) the six of them were cornered by four stormtroopers in an alley.

The squad leader barked, “We have had reports that you folks have been asking about things you shouldn’t be asking about.” All the soldiers brought up his blaster rifle, aiming at the team. The leader told them, “You should disarm and come with us.”

(Eveyone rolled Cool for Initiative. Koogik got a Triumph, which I ruled as her getting the drop on everyone.) The Rodian had her blaster rifle aimed and fired at the lead trooper. The lead trooper dropped.

There was a quick flurry of movements and attacks. Blasters were fired. Another trooper dropped. Malea ignited her blue-bladed lightsabre and attempted to slash at the nearest trooper, and missed. The trooper shot her squarely in the chest. She fell. Vonnick tossed a stimpack to Byt who tended to Malea.

In the meantime, a trio of red-robed figures with tall staves appeared from the rear. They swiped the lower end of their staves onto the ground in a wide-sweeping pattern to kick dust into the troopers’ faceplate, obscuring their vision.

Merick attacked one remaining trooper with his silver-bladed lightsabre. He lunged, but missed. (Lightsabre roll Failure with Advantage.) However, his blade hit a gas tank by the street and it erupted in a large cloud of yellow smoke.

The robed figures helped the team sneak away from the troopers flailing and shooting blindly in the thick cloud of gas – which was not inflammable thankfully. 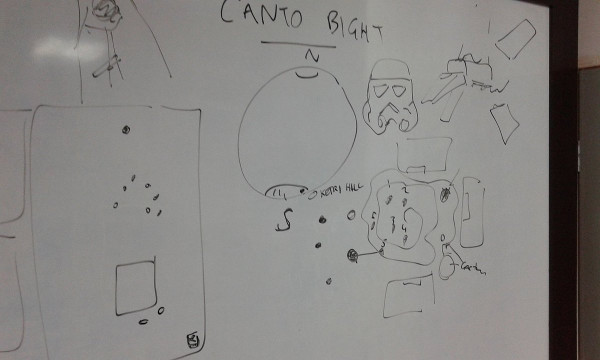 The hooded trio led the team through winding alleyways, past unused buildings and descended through an open circular metal grill. Soon they were in an alcove in the sewers beneath Ketri Hill.

One of the hooded figures revealed himself to be a Zabrak, “Why are you still playing with lightsabres, brother? Don’t you know you’ll only end up killing yourself with it?”

The rest of the team were stunned. Zebrick continued, “Why are you here? Don’t you know this region is crawling with Imperial troops? Do you want to get killed?”

Merrick told him, “We have a mission to rescue someone from a secret Imperial prison on this planet. Do you have any information on its location?”

“Yes,” nodded Zebrick. “We have sent three teams to look for it at its location. All three never came back. If you go, you’ll die there.”

Merrick told him, “We have to complete this mission. The Empire has an important senator held in this prison. For the good of everyone in the galaxy, we have to free him.”

Zebrick thought for a minute and talked to his still-hooded associates. Then he returned with a datacard. “This is everything we have on the prison, including its approximate location. Just follow the directions in the card and you’ll find it.”

But first they had to return to the Bobo.

Complications at the Landing Field

Zebrick and his companions guided the team through the sewers until they stopped under a griled panel through which they could see grey, cloudy skies. Merick and Zebrick said their farewell. The older Zabrak said, “Good luck, brother.” Then he disappered into the shadows.

Salporin popped the grill and was the first to poke his head out. There was the Bobo resting 80 metres away on the landing field where they left her. But there were a pair of stormtroopers present, their backs to him. Seeing as he only had a ryyk blades, the Wookiee carefully and silently popped back into sewer to report what he saw.

Heavy hitters Koogik and Vonnick unslung their blaster rifle and sporting blaster respectively, climbed up to the hole, took their time aiming (giving them a Boost die each) and fired. Vonnick’s blaster bolt put a hole in one trooper’s armour, making him gasp and fall immediately. Koogik’s bolt however (Blaster: Heavy check with one green Ability dice and two yellow Proficiency dice by the way) hit the second soldier in the head (with a net result of three Successes and one Triumph). The trooper’s head exploded and flew off his shoulder leaving a burning stump – before he fell.

The team was amazed at Koogik’s shooting ability.

With no other guards visible, the team hustled toward the Bobo‘s entry ramp. Byt helped to pull the headless trooper up into the ship. Vonnick helped with the other trooper. 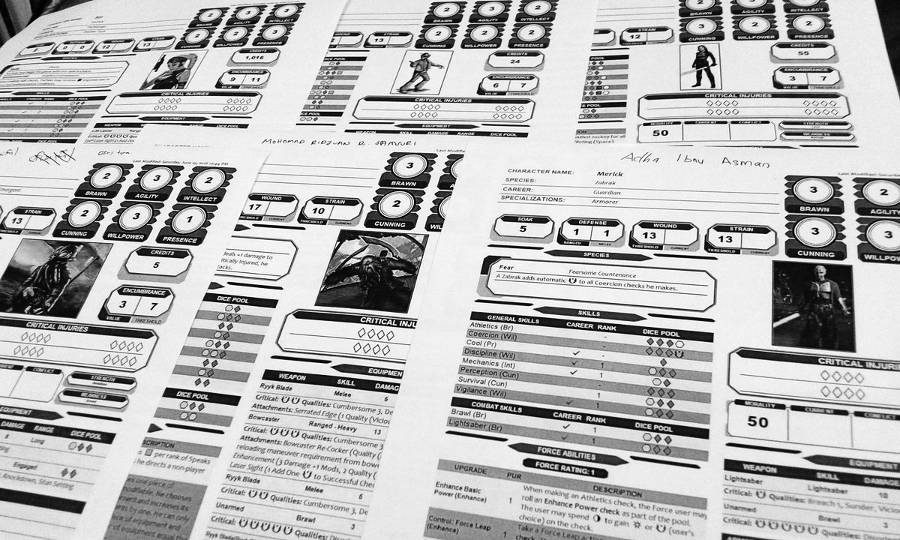 The pregenerated characters from Legends of the Galaxy. Click to expand the image.

But once Byt had disappeared into the shuttle with her corpse, Vonnick heard someone exclaim, “YOU THERE! What are you doing with that trooper? What happened here? Explain yourself!” It was an Imperial Security Bureau officer in full uniform.

Vonnick’s brain raced in a thousand directions and he blurted in panic, “Quick! This trooper is wounded. I found him under our ship. Help me get him aboard. We have medical equipment.”

“This is irregular!” said the officer (but with Vonnick’s one Success and one Threat) but instead of leaving, he went to the Zabrak’s side, “But I will help you get him to your medical bay!”

Byt who had stowed away her cadaver was the only one in the passenger cabin. She heard the conversation between Vonnick and the officer, rolled her eyes and hid between a cranny between two modules on the wall.

The officer failed to notice the hiding Twi’lek as he dragged the trooper’s body into the Bobo. He also failed to notice Vonnick move carefully behind him. He asked, “I say, where is your medical bay?”

Vonnick drew his lightsabre with a single silver flash, the officer also lost his head.

Byt came out of hiding, looked at fresh corpse and shrugged, “Now we also have an Imperial Security Bureau officer’s uniform.”

Flying South for the Winter

Using the information and map from Zebrick’s datacard, they travelled over a hundred kilometres. But then they encountered a snowstorm. The snowstorm buffeted their Lambda-class shuttle which has large wings, a good target for strong winds in an atmosphere.

Everyone was bunched up in the cockpit, peering at the whiteness of the sky trying to locate the prison as detailed in the datacard.

A sudden blast of icy winds threw them off balance causing the Bobo to roll a couple of times. Salporan used all his piloting skills to maintain control, but in his effort (and one unwanted Threat among the dice pool result) he accidentally broke off his control yoke.

Thankfully Malea in the co-pilot’s seat was able to take control of the Bobo before any unfortunate incidents occurred.

That was when they saw it. A gigantic, disc-shaped mass floating a kilometre above ground, covered in snow and obscured by the blizzard. It was an Ithorian herdship. According to Zebrick’s data it was the abandoned herdship Sylvan Soarer, now converted into an unlisted Imperial prison.

Merick suggested they fly low to avoid detection and ascend up to it from directly beneath. 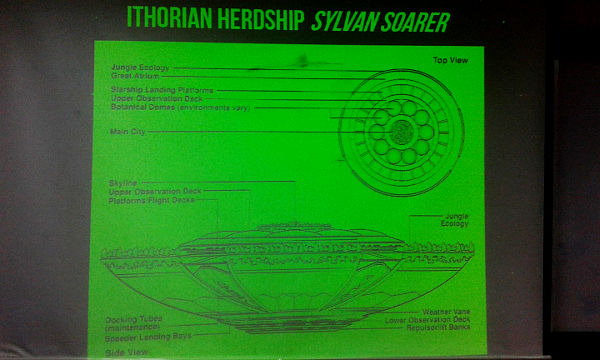 Just pretend the text here is Aurebesh not Latin alphabet.

A sudden downburst threw up a crosswind into the Bobo‘s flight path as it approached the base of the herdship from below. Malea fought for control but failed. Those standing were thrown off their feet.

The Bobo rolled upwards and sideways several times, carried by strong vortices. She smashed into one of the herdship’s lower observation decks. The shuttle hit the deck upside down, two of its wings torn off and slid several dozen metres ploughing through long-unused lounge chairs, dining tables and standing decorations before coming to a stop.

The outside winds swirled into the exposed observation deck, creating whirlwinds of ice, which landed on the Bobo and began to cover it with snow.

To be continued. Maybe.