Page One of Article

Irfan has a planet officially named after him in the Star Wars universe. Specifically, a gas giant in the Vaxal system. Third planet of the system, with seven moons orbiting it. How did it come about, you ask? Thanks to a friend of mine named Gary Astleford, a freelance game writer. He landed a gig writing a Star Wars RPG article for Paizo Publishing’s Dungeon / Polyhedron Magazine (Issue 106, cover date January 2004) and he asked me if he could use Irfan’s name in the article.

So, now Irfan is an official planet in the Star Wars universe, since Paizo Publishing at that time is a Lucasfilm licensee for Star Wars RPG along with Wizards of the Coast for the d20 incarnation of the game. Yay.

Here’s the scan from the part of the magazine with his name on it. 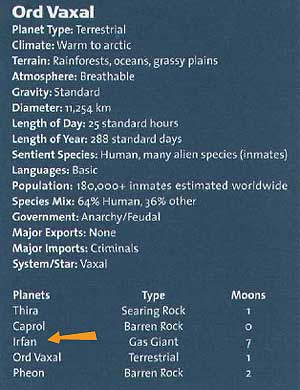