One might be tempted to review Toy Story 3 as such: “The toys from Andy’s room return in the third installment of Toy Story for another wondrous adventure for the children, reuniting the voice talents of Tom Hanks as Sheriff Woody, Tim Allen as Buzz Lightyear, Don Rickles as Mr. Potato Head, the Grand Nagus Vizzini as Rex the Tyrannosaur, Major Derlin as Hamm and the ghost of Jim Varney as Slinky Dog”.

But movie is far more than that. It’s a perfect bookend for the trilogy, dramatically and visually. It’s been 10 years since the first movie and Andy’s all grown up and is ready to move out to college. All his belongings are going to be either stored in the attic or thrown away. Andy has decided to store his remaining toys in the attic, much to everyone’s relief.

It wouldn’t be the great and fun life they had before, but at least they would have each other until the end. 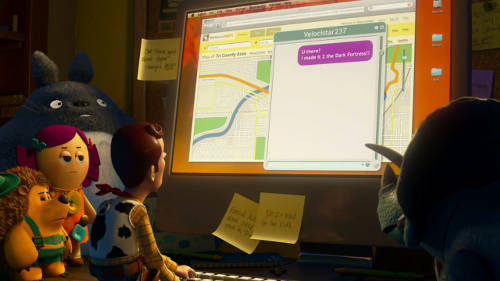 I want a Totoro plushie too

However, a series of unfortunate events occur which causes the toys to end up donated to a day-care center named Sunnyside. Ever loyal to Andy, Woody rallies his friends to try to get back home. But since they mistakenly thought they were donated, the rest of them opted to remain at Sunnyside, which appears to be a extremely toy-friendly establishment at first glance. After Woody says his goodbyes, it is soon clear that Sunnyside is a Stalag for toys, run by the bitter “Lotso”, a Lots-O-Huggin Bear.

When Woody is sidetracked on his way home, he comes to the knowledge of the darkness behind Sunnyside’s toy populace and returns to rescue everyone and get them home before Andy leaves for college.

What is surprising about the movie is how dark the tone is. Even as the movie begins, we are told that some of the old cast like Bo Peep and Wheezy were gone, sold off at a yard sale or thrown away. Buster, the once-energetic dachshund who first appeared as a puppy in the first movie and had some adventures with the toys in the second, was already old, tired and weak. Even the attitude the Andy’s toys display in the beginning was bleak and fatalistic. They are already resigned to spending an undetermined amount of time packed in a box and not being played with. 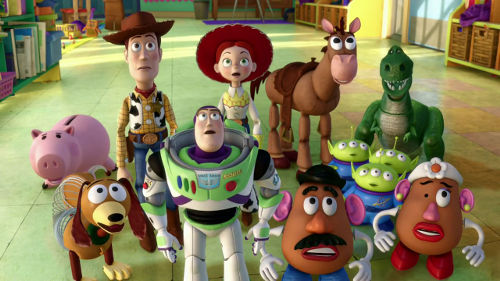 Andy’s toys are faced with the terrible concept of mortality

However, the movie’s plot hurries along at breakneck speeds putting our heroes through a series of perilous and humorous situations that a lot of the darkness simmers under the viewer’s awareness. We meet many new colourful characters, most of which are funny and some are menacing. One of them, the silent cymbal-banging monkey with the intense eyes, exudes the same creepiness of the same type of toy when it appeared briefly in Close Encounters of the Third Kind (1977). The creepiness here is magnified tenfold and reminds the viewer how dark the movie is.

After enduring all the adventures and hardship, the toys are even forced to stop running and embrace their mortality in a very powerful scene. Will they survive the final danger? Even the toys do not think so in the scene – and they convey the emotion fantastically. Woody tries very hard to keep his crew together while simultaneously be loyal to Andy. But one of the themes of the story is change.

In the end, everything is changed forever because ultimately Andy is now a young adult, resulting in a bittersweet ending for these characters most of whom first showed up in Toy Story back in 1995.

Other notable points of the Toy Story 3 is Ned Beatty at his sinister best as Lotso, Michael Keaton and Jodi “The Little Mermaid” Benson as Ken and Barbie who are both hilarious in an interrogation-torture scene, “You’ve Got a Friend in Me” performed by the Gipsy Kings and DEATH BY MONKEYS!

Pixar has been churning out quality stories year after year. Toy Story 3 never comes to Up levels of character drama, or Ratatouille levels of sense of awe. However it does possess more heart and soul than the usual crop of Hollywood summer blockbusters. And if you’ve who played with toys as a child and never threw any of them away when you’ve grown up, this movie will be doubly wonderful for you. 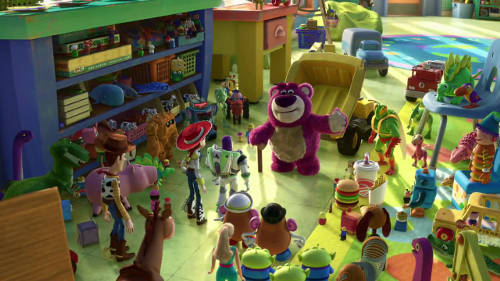