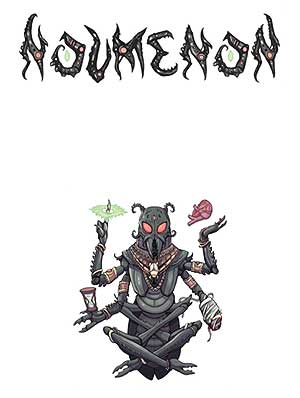 Abstract Nova website has been updated with more tidbits on the upcoming Noumenon RPG, where one of the two vignettes I wrote will be published. The book will be released in June, but the month before that a character sheet and a sampler will available for download.

GamingReport.com also has a news report on Noumenon:

There is a place outside of normal existence called the Silhouette Rouge, a place where the conscious and subconscious merge, where the real and unreal are one in the same. The Sarcophagi, creatures lacking memory and identity, are imprisoned within this place. They walk the Silhouette Rouge hoping to divine its secrets for only revelation and enlightenment can grant them release.

Noumenon is a role-playing game of mystery and abstraction. Players assume the roles of the Sarcophagi, strange insect-like creatures trapped within the Silhouette Rouge. During their adventures, players will encounter bizarre entities and explore strange locations. The Silhouette Rouge, Noumenon’s setting, is detailed enough to spark the imagination yet open enough to allow customization. In Noumenon, player cooperation is key. Noumenon uses a domino-based task resolution system that enables player to build upon each other’s successes.

Bizarre, indeed. And intriguing enough for me to wait eagerly for a comp copy of the book to arrive some time next month, or June.

And if I’m really lucky, I’ll even be able to run it some time. *sigh*