We last saw the saga of Skynet’s time travelling cyborg creation in Terminator 3: Rise of the Machines. Well, you can forget about all that cause showrunner Josh Friedman’s tossed most of the third movie out the window (or is now alternate universe version of the Terminator millieux). I remember hearing about the announcement of the upcoming TV series Terminator: The Sarah Connor Chronicles and feeling underwhelmed. But after viewing the first few episodes, this show has now made my regular viewing list. 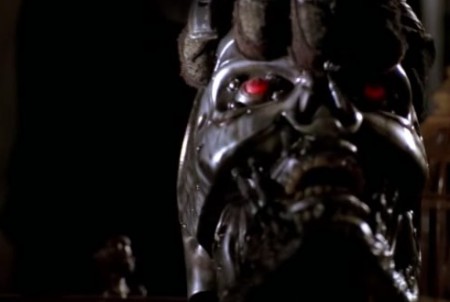 The TV series starts 2 years after the events of the movie Terminator 2: Judgment Day. Sarah Connor and her son John, the future leader of the leader of the Resistance against the machines, are living out their lives under the name of Sarah Reese. When they decide to move to another town, trouble begins. John is attacked by a substitute teacher Mr Cromartie, who happens to a T-888 model Terminator sent to the past to kill John. But John is saved by his classmate Cameron Philips who is a female form Terminator sent back by future John to safeguard current John from more assassination attempts. Cameron brings Sarah and John to 2008 using a time displacement device built and hidden by a Resistance member who was sent even further back in time.

Now, Sarah and John, protected by Cameron, has to evade Cromartie, stay ahead of the F.B.I. and do whatever it takes to stop Skynet from coming to life, which has now been stalled to 2011 thanks to their work in Terminator 2.

I love the Terminator and Terminator 2: Judgement Day. I never got to see Terminator 3 in its entirety. So its exclusion from the TV series continuity doesn’t really affect me much. Can the Terminator franchise survive without the visual archetypes set by Linda Hamilton and Arnold Schwarzenegger? Yes it can. Josh Friedman has the first season all planned out, instead of giving writers write random stories based on the series bible. And according to one interview he also has ideas in mind up to the fourth season. 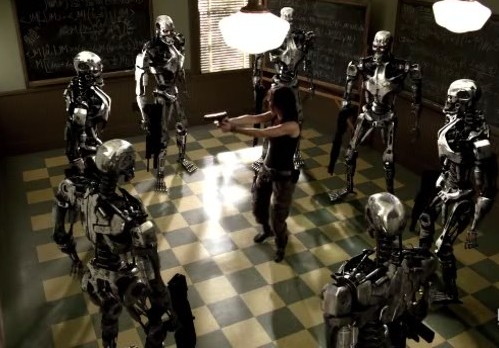 Story arcs do not let up at all. There are no stand alone episodes. You really need the recap intro so you don’t lose track of what came before. Hell, it takes Cromartie 3 full episodes to repair himself, taking one bloody step after another.

The actors fare well. Summer Glau makes a great Terminator. She kicks ass well and comes up with some funny unintentional one-liners. However, I have also noticed that she’s not really talked about where and when she comes from, only that John Connor sent her. I am now wondering if she’s telling the truth.

We last saw Thomas Dekker as Claire the Cheerleader’s sidekick in the first season of Heroes. He plays a John Connor who is very aware of the danger he’s in, adept enough to quickly learn to use 2008 computer technology. However since it’s a TV show, he doesn’t swear as much as Edward Furlong in T2. Maybe once in a while you could have him curse out loud, “You VD-infected, slime-dripping son of a motherless goat!” Or maybe not.

Finally, Lena Headey has apparently gotten a lot of flak for being ten years younger than and not as physically imposing as Linda Hamilton. She does however portray Sarah Connor someone who is also well-read as well as combat capable, and once in a while a fish out of water when dealing with 2008 technology. Can you imagine what people from 1999 would say if you showed them a 2008 model mobile phone?

I can’t wait to see what surprises the rest of the season has for us.

Posted in TV and tagged TV.