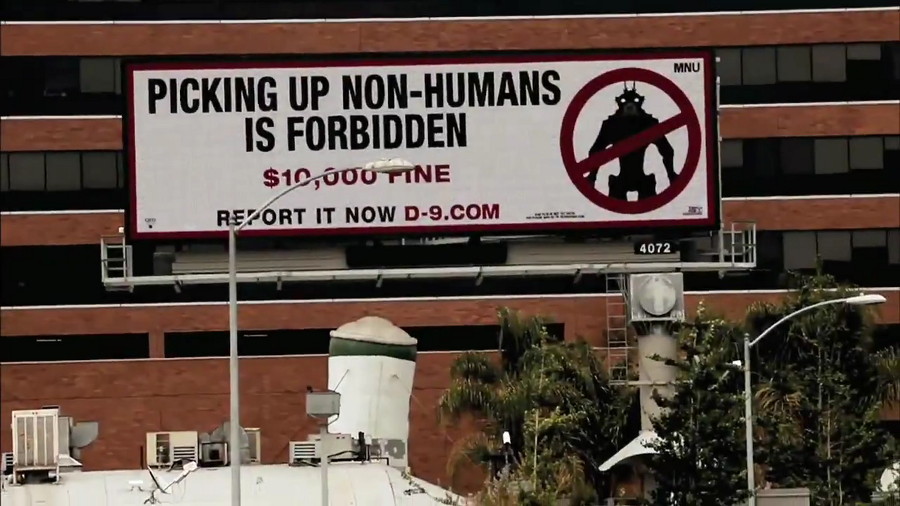 A gigantic spaceship appears in the skies above Johannesburg 28 years ago. A million starving insectoid sapients are found in the ship, and ferried ground-side. Now, a guarded slum area called District 9 exists in Johannesburg that tries to keep these alien “prawns” away from humans, while the Multinational United (MNU) administrates District 9 as it attempts to pry secrets of alien technology from the dumb prawns for profit.

The movie District 9 doesn’t have a particularly original storyline. In fact its premise is largely based on and a commentary on the apartheid in South Africa. It’s not really very hard sci-fi, with a lot of the science relegated to background. We see and marvel at alien technology and its effect but we don’t go into details. Its hand-held shakycam effects are not as motion sickness-inducing as say The Blair Witch Project or Cloverfield, but it does have some jitter even when there’s no in-universe camera in action. 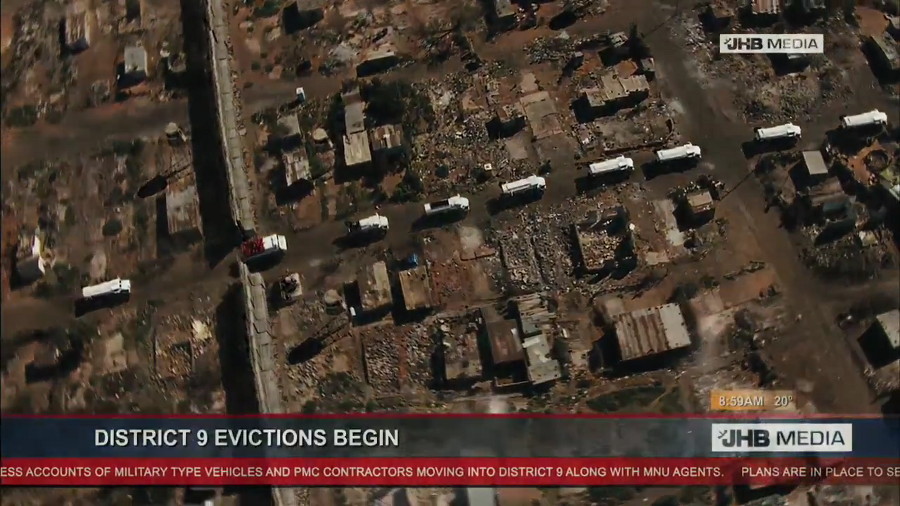 Michael Jackson’s death this is not

However, all these different factors (which includes an awesome improv performance between stars Sharlto Copley and Jason Cope) mix together perfectly to create one of the best science-fiction movie in recent years. One might argue that it’s this mix of uncertain factors that made Star Wars a hit 32 years ago.

SPOILERS beyond this point, sirs.

The story does not dwell too deep into why the prawns are here. It only alludes to how they found the prawns starving and aimless aboard their mothership and postulates that their hive mind was broken because of the loss of an unknown ruling caste, or perhaps a queen. What director Neill Blomkamp has done was to frame his tight little story within an atmosphere of uncertainty and ambiguity, using news and interview footages that sometimes contradict themselves. 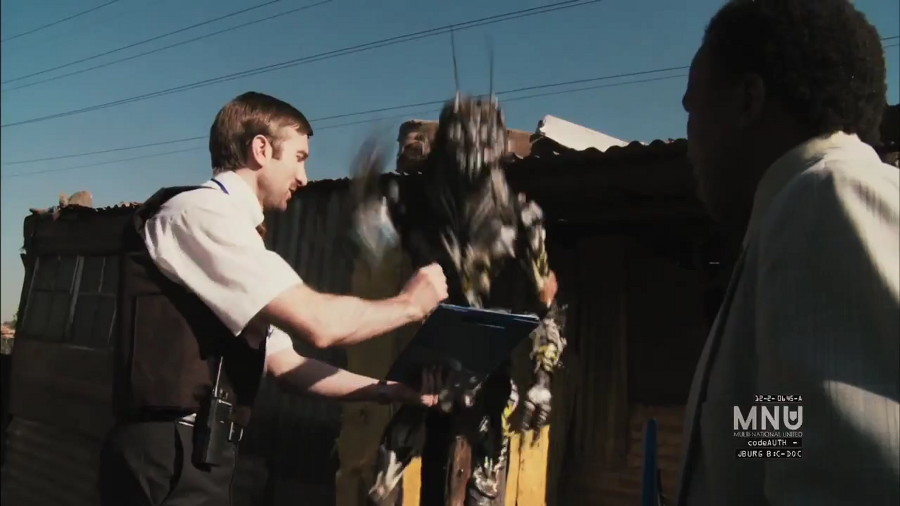 Why are the prawns here? What circumstances put them on Earth? Did they bring weapons into District 9 or created them there? Why couldn’t MNU hack the DNA-based weapons after 28 years? Did MNU explore the mothership for prawn tech? Not only are the audience asking these questions and more, but characters in the movie are asking and giving conjectural answers to most of these questions. In effect, the answers are not important; only what you feel with regards to this alternate universe created by the filmmakers.

Sharlto Copley who plays Wikus van de Merwe does an amazing job portraying a bureaucrat who gets in way over his head. Wikus’ troubles began when he is picked to lead MNU personnel into District 9 to get the prawns to sign off on their eviction to a new guarded township 200 kilometres away from Johannesburg. He starts out as a low-level clerk who shows off pictures of his wife to the accompanying cameraman and camaraderie with other MNU employees while displaying inconceivable, perhaps subconsciously horrible bigotry to the prawns during the operation. 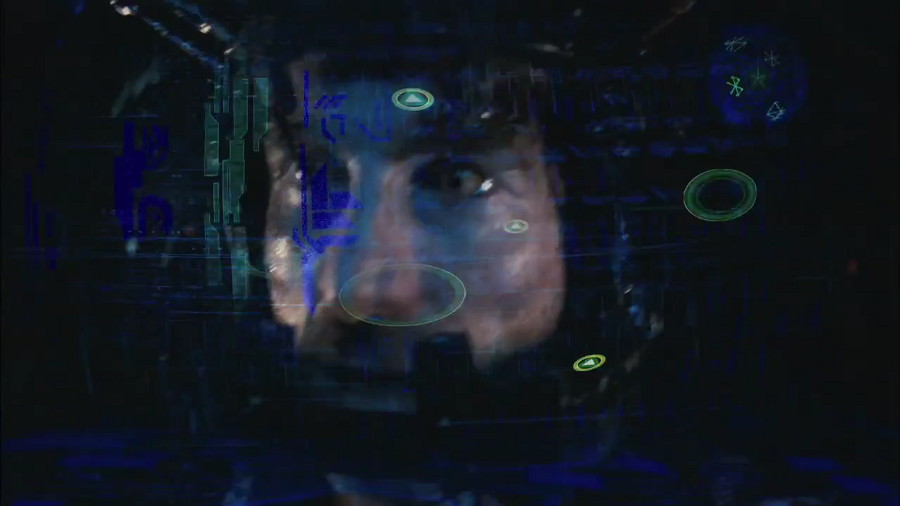 Wikus is not in a good place, so let’s push some buttons

Soon, his ambiguous-to-the-audience nature quickly become sympathetic, but still we see sparks of his old bureaucratic mind and bigotry and self-preservation come through. And he has only prawns to rely on namely Christopher Johnson and his son, who are somehow significantly smarter than other prawns. (Why? That’s another question to be added to the ones two paragraphs above.)

All this social commentary in a science fiction movie is topped off with an intense climactic battle between Wikus, MNU mercenaries and savage Nigerian gangsters, involving a battle mecha, slugthrowers, mini-missile spam, tesla guns, gravity guns, a flying dead pig as a lethal projectile, and Wikus’ moral stance. What this is is catharsis. After so much ambiguity, we finally know (or we’re somewhat certain) who to root for and, boy does it make us cheer. 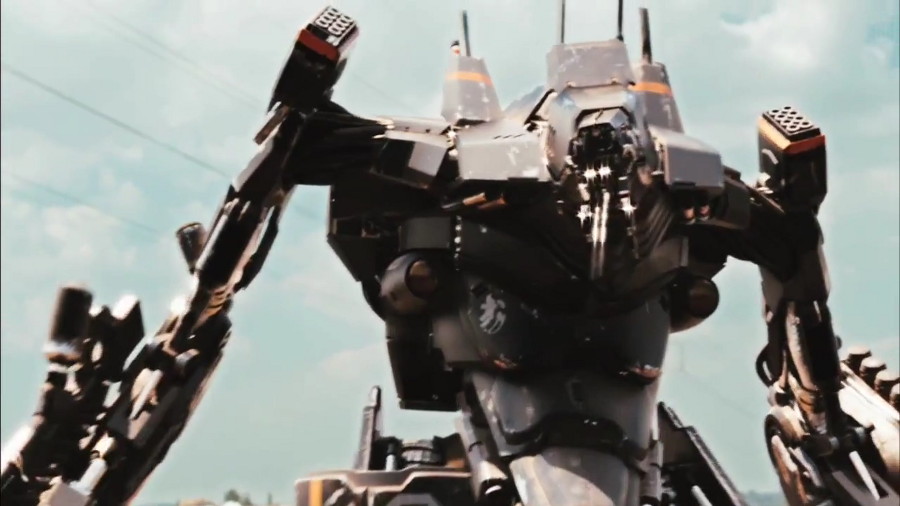 Where the hell is my live-action Robotech movie

But the ending, like the entire movie, isn’t sugar-coated and spoon-fed nicely to us. I don’t know if bittersweet is the word for it. It leaves us hanging, wanting for more information and story. But strangely, I find myself satisfied by its presentation on the screen and will be happy if this is just a stand-alone movie.