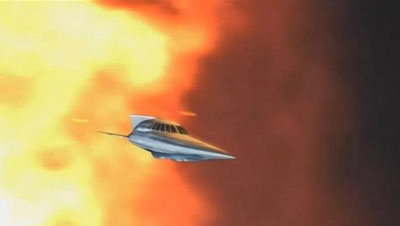 The GM announced that this week was going to be a standard dungeon crawl, to which everyone shrugged and went, “Meh.” However, after recapping last week’s session, he started out with a bang by shifting the scene to two new PCs. Senator Padmé Amidala of Naboo and her protocol droid See Threepio were both on their way to a secret meeting with the Intergalactic Banking Clan, an enemy faction, when suddenly they reverted back in normal space right in the middle of last week’s closing skirmish.

The PCs asked the GM why “Intergalactic” when they were only in a single galaxy? The GM reminded them of the map in Episode II: Attack of the Clones, which displayed a main spiral galaxy and at least one dwarf satellite galaxy. So, “Intergalactic” was technically correct. Anakin’s player thought they’d better update all the official sources with this tidbit of information.

Failed space transport piloting rolls allowed the Malevolence‘s tractor beam to grab onto the Nubian H-type yacht and pull them into a hangar bay. Quick communication rolls allowed Padmé to contact the Resolute, alerting the rest of the PCs, Anakin and Obi-Wan to her plight.

As per the first adventure session involving the Malevolence, the PCs had to be split up and their respective encounters had to be run alternately. The GM began with the Resolute bridge. The PCs roleplayed out Anakin’s decision to go after her aboard the battle cruiser. The PCs headed down to the hangar bay to get to their frieghter Twilight which was an old beaten-up, but modified G9 Rigger freighter. Astromech droidn Artoo-Detoo came along for the ride as an NPC. 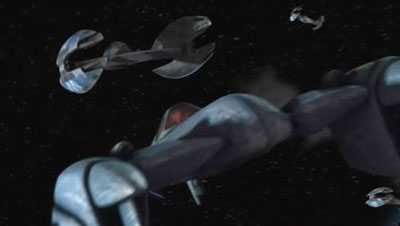 Soulless One and Vultures

Meanwhile, the PCs trapped on the Malevolence planned to blow up their yacht with General Grievous aboard. They set self-destruct and sneaked out, as the General strode into his catch of the day. But his Perception roll succeeded and noticed the self-destruct warning. He ran out just as the yacht exploded.

Using the debris cloud around the Malevolence as cover, the other three PCs aboard the Twilight reached an airlock at the hull of the Separatist battle cruiser. Thus the dungeon crawl began alternating encounters between Anakin’s group and c’s group until Padmé found a communications device. A successful Technical roll allowed her to contact the Resolute, where the GM controlled Ahsoka Tano  rerouted the call to Anakin. They agree to rendezvous at the large rail jet network deep within the ship, between the both of them.

The GM warned both players to dial down the romantic vibe of their roleplaying or everyone this side of the core will know that their PCs are secretly married.

What followed was pure awesomeness. The GM plotted out the general positions of the rails and determined when and in which direction the rail cabs would be travelling on them. Anakin and Obi-Wan rolled their Telekinesis skill rolls to jump from railcab to railcab in an attempt to find Padmé and Threepio. When they did turn up, they were under attack by battle droids. Padmé got aboard a railcab, but a battle droid uses a missile weapon to take out the rail line in front of it. Anakin succeeds in rolling his Alter skill to telekinetically pull Padmé to him. Obi-Wan attempted the same with Threepio but failed his roll. A railcab slams into the droid, taking him with it down its rail. (Thankfully his Strength roll against collision damage was high.)

Padmé informed them that in one of her encounters, which required a high sneak and Perception roll, she had heard that the Malevolence‘s hyperdrive damage was almost repaired. Obi-Wan rolled Technical to determine which railcab would take him to the ship’s engineering section where he would try to sabotage the ship.

Anakin contacted Artoo and asked him to use his computer operations skill to stop the railcab Threepio was on. He succeeds, allowing Threepio to be free of the railcab. He attempted to find his way to the others.

At the engineering section, Obi-Wan discovered that Grievous had set a trap for him. He had to use some Force Points with his Telekinesis and lightsaber skill rolls to escape the General and his platoon of battle droids.

Anakin and Padmé discovered the bridge, where the Jedi had to roll his lightsaber skill several times to cut down all the B1 battle droids there. As Padmé stashed away the droid bodies, Anakin’s player wrote something on a piece of paper and gave it to the GM. The GM asked him to roll dice for an unknown move. 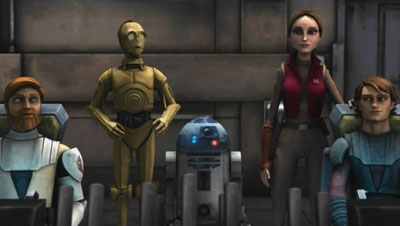 In the next scene, Threepio rolled his Technical attribute dice successfully in his hallway wanderings and found Artoo. They head back to the Twilight together.

Obi-Wan was being pursued by Grievous as he fled on the railcabs. The cyborg Kaleesh hounded him and attacked him with lightsabers. Obi-Wan’s player rolled his lightsaber combat dice time after time to avoid being dismembered by Grievous. Finally he rolled his jump skill at the right time and landed on another railcab, where Grievous could not follow.

The GM used the tried and tested trope of everyone reaching their destination airlock at the same time. The last through the airlock was Obi-Wan whose lightsaber skill rolls deflected blaster fire from incoming battle droids before the doors closed. They detached the Twilight from the Malevolence and started to flee, chased by Vulture droid fighters led by Grievous who piloted his Belbullab-22 fighter, named the Soulless One. Padmé got into the weapons station and rolled her starship gunnery skill, destroying at least one of the Vulture droids.

The GM described a cutscene to the players as they were still being chased, where battle droids on the bridge of the Malevolence have repaired the hyperdrive and was preparing to make the jump to lightspeed. But when they were about to pull the levers, the GM told the players that Anakin’s capital ship repair skill roll done in secret while he was at the bridge had succeeded. Before the droids could effect repairs, the Malevolence plunged into a nearby moon, destroying itself on its rocky surface. The players cheered.

A second cutscene was described where the Separatist leader Count Dooku attempted to contact Grievous in his fighter. But the shamed General cut off the hologram and jumped into hyperspace. The players cheered again, except for Obi-Wan’s player who had begun to hunt for soda in the fridge.

Finally, the GM awarded character points, and replenished and increased the Force Points of the PCs who used them. The players agreed that the Malevolence, which had no maps and only rough estimates of which section is located in relation to the rail jet network made a perfect dungeon crawl. If they had to follow a rigidly structured map of the Subjugator-class battle cruiser it would take too much time and the in-game story would have lost its momentum.

Before everyone went home, the GM thanked everyone for participating in this three-episode subcampaign and promised next week would be a straight up comnbat encounter in a stand alone session.