Irfan began a playing a new game today: Palladium’s Robotech RPG. Sila had a copy back in our teenage years. I played less than her friends and her did because I was away from home for most of the time. We were totally into Robotech. Sila taped every episode for me to watch when I’m back from boarding school. We bought and read as many of the Jack McKinney novelizations as we could.

And 25 years later Irfan is now playing it. I’m running it. I admit I was curious to see how the system feels like when I’m now 40 years old. 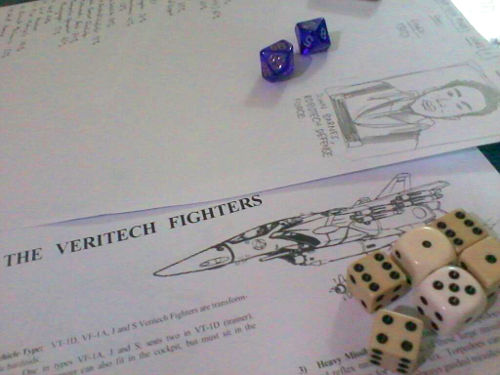 The character is based on Donald Glover

He rolled up an RDF Veritech pilot named John Barnes.

Flight officer Barnes was an F-22 fighter pilot, assigned to the Robotech Defense Force base outside Nouakchott, the capital city of Mauritania. His usual missions were flying patrol sorties along the West African coast. He had been training in a VF-1 simulator for months, but he had never seen one before…

A flight of three new fighters landed at the base early in the morning. They had livery of dark blue with light grey highlights. The Nouakchott base insignia was painted on both its tailfins. Although it resembled the obsolete F-14s, it had modules that fit onto the fuselage strangely. He knew what they were. It was time to see them at work.

Squadron Commander Shiryo Kikue ordered Barnes to fly the new VF-1J on a northwest heading at ten thousand feet and engage an F-35 in a mock aerial combat sent from RDF Gibraltar. The base had a dozen Destroids – ground-based mecha – assigned to it that was used to patrol the coastline and the wastelands surrounding the city, but this was the first time Veritechs were assigned to Nouakchott.

Barnes made himself comfortable in the VF-1J’s cockpit and familiarised himself with the “thinking cap” helmet. Just after sunrise, the fighter was airborn.

Barnes was still looking out for the enemy F-35 when it dropped out of the clouds into his six. (Barnes wins the initiative roll.) Before the F-35 could fire, Barnes immediately deployed his flaps slowing his Veritech considerably. The F-35 tried to duplicate Barnes’ move, but Barnes had executed a tight loop and fell in behind the Gibraltar base fighter, gaining the upper hand.

Barnes pulled on a lever and sent a thought. He felt the fighter transforming. Modules and parts of the aircraft pivoted, slid out and unfolded. The Veritech mechamorphosed from Fighter mode to Guardian mode, its front half including the cockpit still looked like jet fighter but it now has human-like arms and legs. Its arms brandished a 20mm GU-11 gun pod.

They fought. Laser rangefinders and targeting computers calculated their simulated weapons fire. (A lot of d20 rolls for attack, shooting mostly 4d6 long burst and 6d6 full melee attack with the gun pod, and 1d6x10 missile attacks, one after another, shaving MDCs off their mechs. Fortunately for Irfan, the F-35 hit zero first.)

Although Barnes kept missing initially with the gunpod and the missile lock, his integration with the Veritech’s systems via Protoculture allowed him to destroy the other fighter in the simulation. The other pilot radioed, “Good fight, Alfa 2. The Veritech is a formidable aircraft in combat. I’m heading back to Gibraltar. Hope to fight beside you some day.”

“Have a good flight home. Alfa 2 out.” They headed back to their respective bases.

En route home, Barnes flew over the wasteland to the north of Nouakchott where the Sahara was bombed thoroughly during a battle in the Global Civil War. The war that ended upon the arrival from space of the SDF-1 on Macross Island half a world away.  There were countless large craters that became sinkholes over the years. Deeper than the sea level and close to the coastline, seawater had seeped in turning them into giant water-filled potholes.

The radio buzzed, “Mayday! Mayday! This is Gladiator Sequoia 3 requiring assistance! Fallen into a sinkhole and can’t-” The signal was gone. He was unable to use his satcom gear to triangulate the signal source. (Failed Radio Satellite roll.) So he turned and tried to re-establish contact again.

“-out of my cockpit and trapped underneath rubble in the-”

Barned mechamorphosed back into Guardian mode and hovered over a sinkhole where the signal might have originated. It was too small for the Guardian-mode wings to enter. He willed the Veritech into the humanoid-shaped Battloid mode and jumped in without reporting to base.

Water splashed up at Veritech ankle-level. The cavern was much wider than the hole. There was the Gladiator Destroid crouched beside a large pile of rubble that had fallen from the ceiling, several metres higher than the Veritech’s head. Barnes called, “Pilot, this is Alfa 2. Where are you?”

“I’m under the rubble. I left the cockpit and was trapped by falling rocks. You have to help dig me out.”

The Veritech took a step. The radio crackled again, “DON’T! You might cause more rocks to fall! That would kill me.”

“Okay,” said Barnes. “Hang on.” The Veritech head pivoted back and his seat was raised out of the cockpit in the Battloid’s chest. He climbed down the handholds and waded chest deep toward the pile of rocks.

It was then the Gladiator moved, its fists about to pummel down into Barnes. He jumped out of the way, but the wall of water from the Gladiator’s fist slammed him into the rocks, injuring him.

He looked up and saw that a female figure in a dark form-fitting costume was lowering herself from the sinkhole opening onto the Veritech’s shoulders. He drew his Mateba Model 6 autorevolver and ran forward. The Gladiator’s chest cockpit hatch swung open and saw a male figure unslinging an MP5 from over his shoulder. The woman was strapping herself into the ejection seat.

First things first. Barnes took a careful aim and fired. The .357 round struck the woman in the head. She went limp in the seat.

Machine gun fire rained down on Barnes. Miraculously unscathed, he reached cover on the far side of the Veritech’s feet. He climbed up to the shoulder and fired repeatedly at the shooter causing him to shut the cockpit canopy. The Veritech pilot kicked the woman’s body off and several heartbeats later, he was back in control of the giant robot.

Although he had the initiative, Barnes was unprepared for the GU-11’s recoil. The 20-mm rounds struck water and rock instead of metal. (He failed a Full Melee Attack.)

The Gladiator fired its ROV-10 head lasers, gouging the Veritech’s chest armour. It also punched the Veritech’s head, and immediately after Barnes dodged its deadly club. Then it switched tactics, using its ROV-10 and its 32-mm cannons to shoot at the VF-1J’s knees, trying to sever the right one. There was no space to manoeuvre.

Barnes fired a heavy missile which exploded against the wall behind the Gladiator, damaging it substantially with debris and shrapnel. Although he also tried punching it, it was his sustained fire from his Veritech’s head lasers that tore his opponent’s chest apart. It fell back and slumped on the cavern wall, its chest sparking and belching smoke.

Barnes leapt out of the hole, but saw no one else. The Battloid shape-shifted back into Fighter mode and soared back to Nouakchott base for a debriefing.

In the infirmary, Commander Shiryo and the base security chief Major Gretchen Pokorny informed Barnes that a security team had investigate the sinkhole. The woman he had shot was Lily Sauvage, a famous military gear thief. She had stolen everything from aircraft to tanks to ICBMs. Once she and her team had even stolen a Los Angeles-class submarine. Evidently she was paid to steal a brand new Veritech fighter and used Sequoia 3 as bait. She would have succeeded if it was not for Barnes’ well-aimed Mateba shot.

Based on their behavioural records, Minette would now be out for Barnes’ blood.