I have a Role-playing Games category right over there at the left sidebar on the front page of the site. I’m sure there’s a lot of visitors to this site that will probably shrug and say, “I dunno”, or half-heartedly answer, “Something like Dungeons and Dragons?”

Well, Dungeons and Dragons is a role-playing game (RPG is the popular acronym attributed to it), true. But it’s more than just D&D and we’ll get to that later. 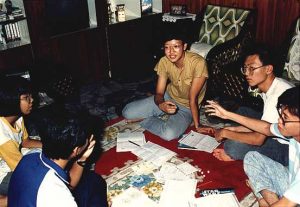 If you ask ten gamers, you’d probably get ten different answers on the description of an RPG.

So this is a description of a role-playing game as what it means to me.

What Do You Do?

A role-playing game (RPG) is a collaborative game where players take roles of characters in an interactive story which is planned out and refereed by a game master (GM). There needs to be at least two people in the game the GM and one player. More players of like mind, more often than not, would mean more fun.

It would look like a bunch of people sitting around the table (or the floor as depicted to the left) talking to each other contributing to the story. The GM would narrate the set-up to the players and moderate the situation, and the players will choose what actions their player characters (PCs) that they control would take.

How Do You Resolve Actions In Game?

When resolution of an action can either succeed or fail (for example, picking a lock of a door, swimming in strong current or trying to shoot an arrow into a dragon), players will have to roll dice based on their character’s attribute scores. A player would roll against a target number or against an opponent’s attribute score. Some characters have better chances in physical skills while others do better at social skills, or mental skills, or technical skills. Therefore, all players have to cooperate as a team to achieve their goal.

Some games use playing cards (like Savage Worlds) and dominoes (like Noumenon) in their rules to add to the randomness of the game. Some games, like Amber has a diceless system instead focusing on comparing attribute scores.

Sometimes your character can die in a game with an unlucky dice roll, but that’s the risk of playing the game. Just create a new character and join the rest of the party in the next session (or immediately thereafter, if situation permits).

How Does The Story Come Into Play?

The story and situations in the story is narrated by the GM. The players react to this and choose what they will do. The GM also counter-reacts to the players’ actions and has to improvise to ensure the story flows well and the players are entertained. The overall story will change accordingly while adhering to the general theme of the campaign.

A campaign is a series of adventures and games with almost always the same PCs, allowing situations to change and the characters to evolve and to grow older within the game. A GM can plan the campaign to have an epic storyline for the players, with a beginning, middle and an end. A player can start out as a lowly street thief but by the end of the campaign might chance to become the king of a country, if the choices he makes lead him there.

In the end, you and the other players have experienced a unique storytelling media unlike that of motion picture, books or video games.

So It’s All Just Dungeons and Dragons?

As I mentioned before it’s all not just Dungeons and Dragons, which is a knock off of J.R.R. Tolkien’s Lord of the Rings take on fantasy novels. There are a plethora of games out there created by large companies and independent publishers, which covers a broad spectrum of genre, from fantasy to science fiction to horror to western to steampunk to pulp. Some games are licenced from other media, such as the RPGs of Star Wars, Battlestar Galactica, Serenity, Lord of the Rings, Marvel Super Heroes, Robotech, James Bond 007 and the forementioned Amber which is based on Roger Zelazny’s series of novels.

There are also original worlds for players to play in and explore, like the western with some weirdness Deadlands or Dogs in the Vineyard, the pulp setting of Spirit of the Century, the future dystopian cyberpunk world of Shadowrun with elves, dwarves and orcs that can use magic, or the alternate history game of Rocketship Empires 1936, where World War 2 was fought in space.

However I’ve yet to see RPGs based on daytime soaps and Japanese / Korean serials.

Although some gaming system rules are married to certain settings, there is no reason why you cannot drag and drop a whole (or part of a) system from one setting to another, for example using West End Games’ D6 system for Dungeons and Dragons.

It’s Just Like Video Games, but With No Graphics and Surround Sound?

Yes, but for two things.

Like I said, it’s a unique medium that integrates gaming with storytelling.

If you like reading and you like stories and you like a great afternoon with your like-minded friends, try sitting down, create your characters and run a role-playing game with them. You might just be surprised at how fun it can be.