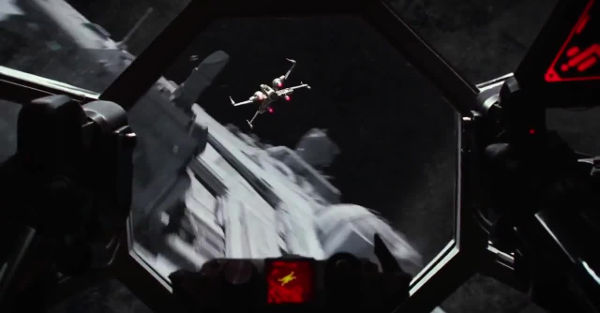 We finally saw Star Wars Episode VII: The Force Awakens the evening of the 18th, a day after general release. I discovered that trying to write a review about it was impossible for me.

I will get to that soon, but what about the movie itself?

It was to me an excellent Star Wars story with new characters interacting with the old, swashbuckling their way through space to save lives. I suppose the story beats did get too close for comfort to the original trilogy, but with characters that were amazingly developed and actors who had great chemistry with each other. It was a fun movie. Although there were some things that I did not like about it (such as how it was possible to see the First Order’s beam from a planet too far away), these things are trivial compared to the fun experienced from watching it.

But why do I love it?

I’ve been trying to come up with the reason why I like Star Wars and in what possible forms do I like the concept of Star Wars. I have been trying to put it all down in words but I could not seem to get the words right… until after a sudden spurt of inspiration while commenting on a friend’s Facebook post.

The Star Wars phenomenon seems to have transcended stories told in film. And not just stories, but the Star Wars universe itself is a major feature of the experience of Star Wars just like its stories and characters.

I think the essence of it is this: When I first saw the first movie, I wanted to live in that universe. Not really “to live” because I want to jump into hyperspace, dogfight in starfighters, blast at stormtroopers with blasters, swashbuckle with the best of them.

Some people write fanfics. Some draw comics. Some buy and play with the toys. I appear to have found my niche in tabletop roleplaying games (RPGs). So, here’s a tool that ACTUALLY LETS YOU BE IN A STAR WARS STORY and you can do whatever you want in a story and setting that feels like Star Wars. You and your friends are able to experience the Star Wars universe while rolling dice to determine outcomes of conflict.

So, I start digesting the RPG books, then when the EU jumpstarted I read as much novels and comics as I could in the 90s. Why? To get as much SETTING FLUFF from the stories as much as getting ideas for stories from them.

I also finally figured out why The Phantom Menace does not bother me so much. Sure I can point out the poor story, script and editing decisions, but I guess to me it is just another window for me to be in that universe because it gave me new of planets, vehicles, gear and creatures for me to keep on playing in that universe.

Which is also why the schism of the new Star Wars canon and Legends timeline (of the old novels and comics which The Force Awakes would contradict – I am sure Waru does not exist in the new canon*) also does not bother me. The stories and characters attributed to those stories are decanonised, all the elements of the universe, especially those bits and pieces created by West End Games which are not story-related, are still there. Planets, vehicles, gear and creatures. They are all still there! I still get to play in that universe.

Besides that we get a whole new time period to play in with new elements like new aliens Abednedo, Blarinas, Culisettos and Delphidians; Incom/FreiTek T-70 X-wing fighters, Resurgence-class Star Destroyers and Upsilon-class command shuttles; planets Jakku, Takodana and D’Qar to be integrated with the old elements of the universe.**

You might ask why is this universe fun to tell stories and experience these stories in? Doesn’t The Force Awakens confirm that the Star Wars universe is an unending cycle of despair and destruction wreaked by war and strife? (Who won the Battle of Endor? They do not live happily ever after?) That does seem what the real world feels like.

But unlike the real world, I get to be (and allow my players to feel like) space swashbucklers who can be heroes in their little corner of the Star Wars universe. They get the pleasure of fighting against oppression and saving lives within the story in the most spectacular manner they can think of and be happy about that.

And that I suppose what Star Wars – and The Force Awakens movie – means to me.

* I’m not so sure really. Maybe Snoke is Waru. [insert troll face here]

** Yeah, yeah! I bought the The Force Awakens Visual Dictionary.