Earlier this month, we went back to my hometown of Sitiawan where I dug up my old stuff in my cupboard and wardrobe, then posted them on Google+. Here is a compilation of the posts, along with further elaboration, as well as a new photo near the end.

Ancient cache of geekery unearthed at my parents’ house included a single Bill Mantlo / Gil Kane’s Micronauts comic. I’m sure there was another where the ‘Nauts battled a gentleman by the name of Professor Prometheus – at least on the cover. I don’t remember much of what’s inside. 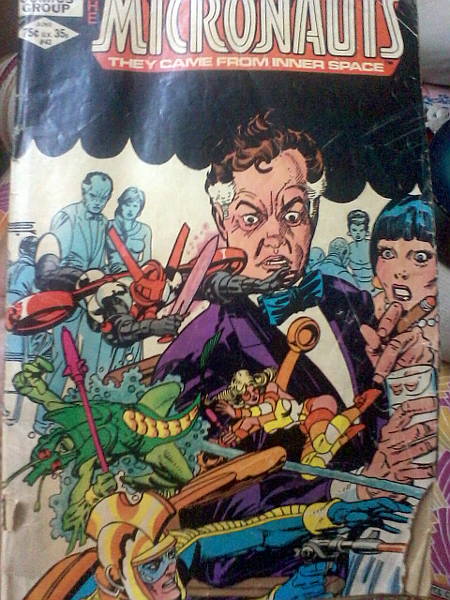 I found a pair of old Dazzler comics – featuring the mutant disco performer who transduced sound to light – still readable with their pages still intact. Several years later, she would be a member of the X-Men. 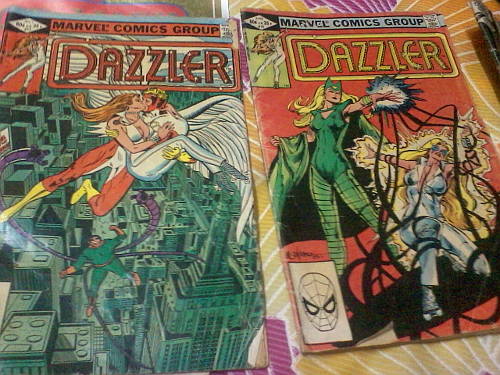 With guest appearances of Otto, Warren and Amora

I bought the West End Games’ Star Wars RPG module titled Crisis on Cloud City, and they had a set of sabacc cards with rules. Cropping cardboard into equal sizes is harder than it looks, even with a metalwork guillotine. 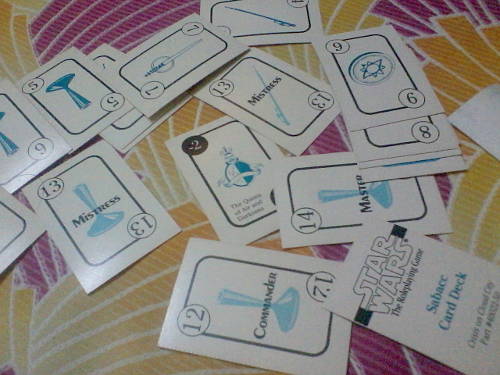 Pretty sure I got an Idiot’s Array before during play

At the back of an old receipt are illustrations and game stats for a Star Wars light freighter named Nasty Nervosa. I didn’t name it, the players did. Don’t ask me why. 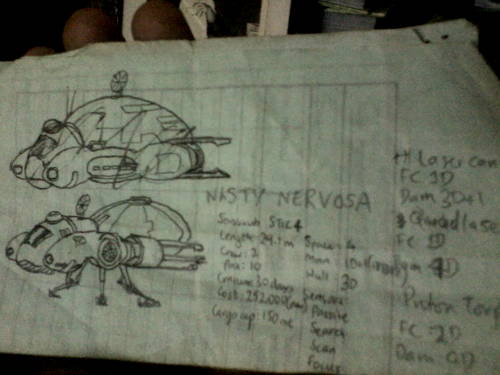 Remember the old Star Wars sunday strips. I believe I culled these from the New Straits Times. Every week there was a panel that featured a character, vehicle or technology drawn by Al Williamson. I tried to collect them all. A futile effort, really. 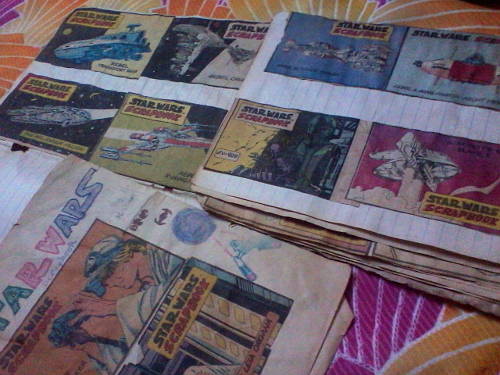 More loot that turned up the following morning: Kirby crackles I drew on a Winnie the Pooh comic cover, and overleaf on the other side of that very same Pooh cover was a classic advertisement of Hostess Fruit Pie featuring Thor! 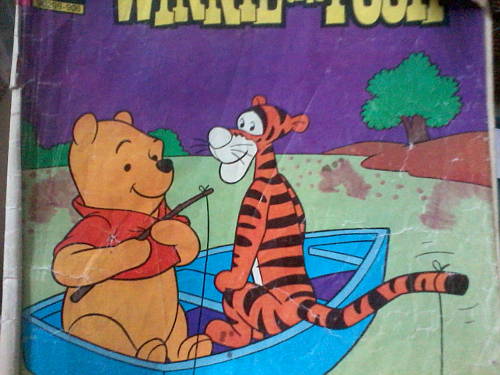 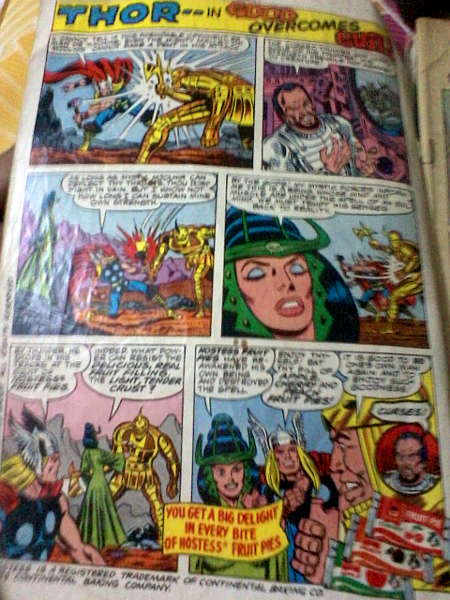 This is a G1 Sideswipe I painted with water colours back in ’87. It’s the only survivor from a bunch of Transformers paintings I did. The others, including Hot Rod, First Aid and Hoist were eaten by termites when I brought them to Kuala Lumpur ten years ago. Stupid Kuala Lumpur termite. 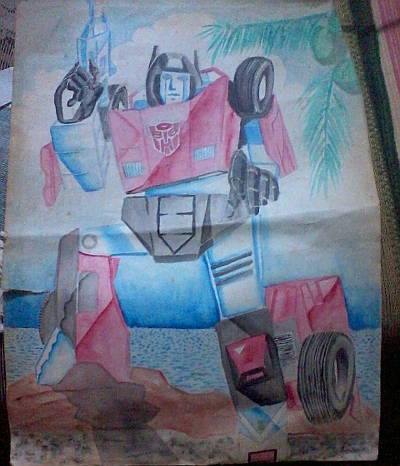 This was Sila’s MERP boxed set. It’s the second edtion, if I remember correctly. I don’t think I’ve ever run it. Maybe Sila did with her crew when I was away at boarding school. 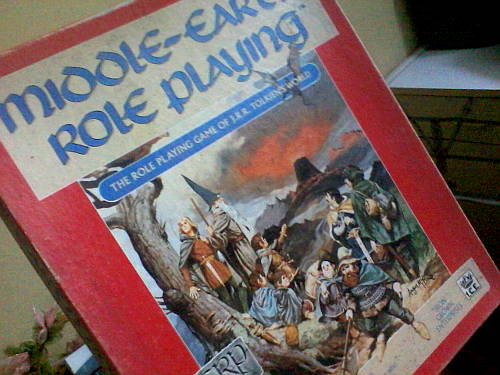 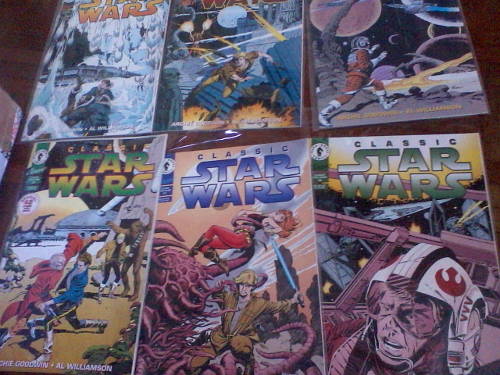 The bottom middle cover is by Mark Schultz. Also, a close up of the letters column in Classic Star Wars #4: Like a true gaming nerd I asked when West End Games vehicles created for the RPG would start showing up (or visually retconned into Classic Star Wars since they do a lot of touch-ups to fit it in a comic book form) in DHC comics. A year or two later, the Chariot command speeder popped up in the Splinter of the Mind’s Eye adaptation comic! 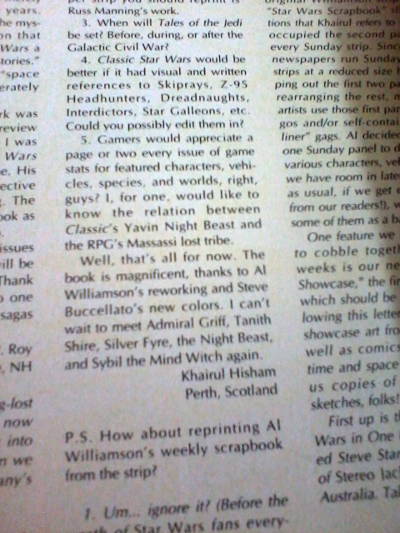 By the Heir to the Empire adaptation, I was numb to the elation of seeing WEG-made vehicles in official comics.

I had left this Star Warriors board game published by West End Games at my folks’ place and nearly forgotten about it. I think it’s time to take it out of mothballs and play it with the boy. I wonder if there are home-brewed Star Warriors stats for newer Star Wars vehicles created elsewhere in various media since this game was made. I know the Tatooine Manhunt module had a Star Warriors scenario as a final battle option. I wish the board was not merely a poster-type paper and had a generic nebula printed on it. 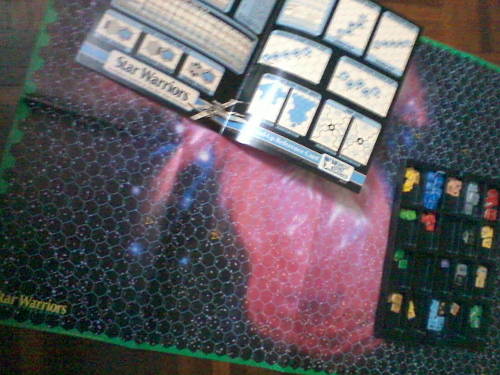 More of my old comics and comic-related weirdness from different dig sites in my parents’ house: 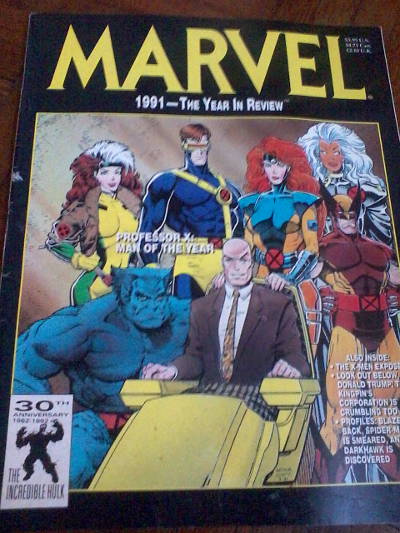 I still don’t get Jean’s costume – among other things

Two Aliens comics: Earth Angel by John Byrne, and the collected Aliens comic anthology that appeared over several issues of Dark Horse Presents back in the early nineties. 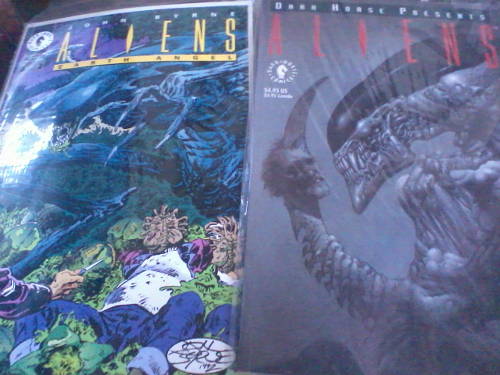 Valiant Comics’ Eternal Warrior #1 & #2. I loved these fun comics when they first appeared. Also had Archer and Armstrong, X-0 Manowar and others. I know that Valiant’s old Gold Key characters like Solar and Magnus are now at Dark Horse, but I wish these original Valiant characters are back in publication somewhere. 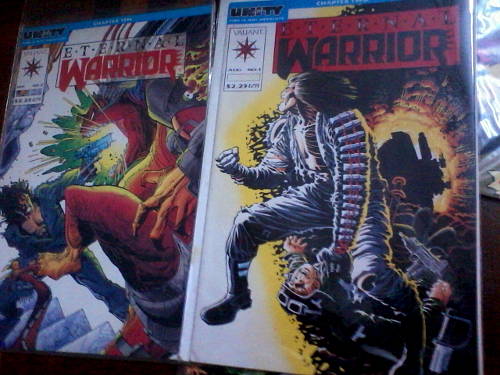 Everyone’s excited about Star Wars: The Old Republic MMO coming out soon by Bioware. However, there is a generation of new casual fans that are not aware of the first appearance of that Star Wars time period: The Tales of the Jedi comic series by Dark Horse Comics.

Starting with the first series, now retitled TOTJ: Knights of the Old Republic, it segued into the bridge series TOTJ: The Freedon Nadd Uprising, and finally ended its epic arc with TOTJ: Dark Lords of the Sith. Later, DHC published two prequel (Featuring Naga Sadow and Freedon Nadd) and one epilogue series – TOTJ: The Redemption of Uliq Qel-Droma.

West End Games even published a Tales of the Jedi Sourcebook for its line of Star Wars RPG books.

They weren’t consistently good, with some shoddy scripting and artwork in some issues, but the sudden existence of a totally new era 4,000 years before the movies was exciting to Star Wars fans at the time. This was almost 10 years before KOTOR. 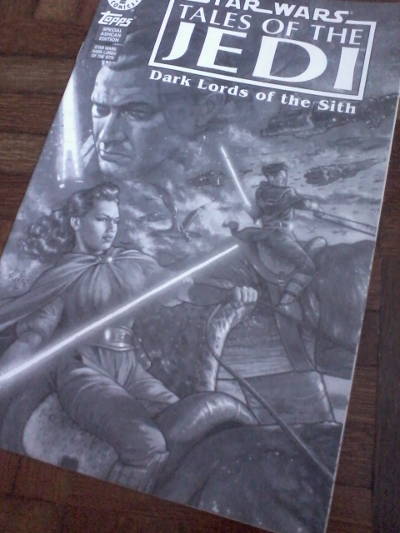 The complete set of TOTJ: DLOS is in my cupboard

Pictured is the black and white Ashcan book for TOTJ: Dark Lords of the Sith #1, along with a shot of the interior that included concept sketches by artist Chris Gossett. 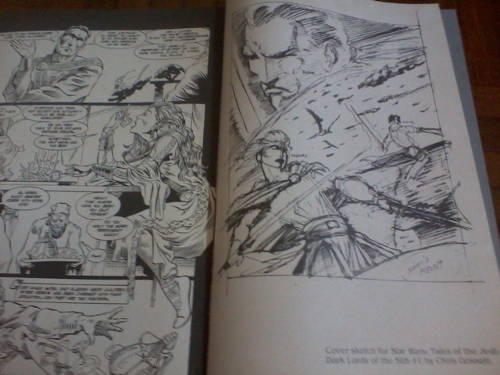 Chris Gossett before he worked on Red Star

Later, I chanced upon some stuff that I almost forgot I possessed: collectible cards! Some stuff I had bought piecemeal, packet by packet, but some of them are freebies that I got from trade magazines like – I can’t really remember – Wizard and Star Wars Galaxy Magazine perhaps? Anyway, let’s continue:

Reboot uncut cards – This one might be from Wizard or some trade magazine I’d bought. Still looks great despite being in a dark drawer for a better part of two decades. Ironically, I’ve only seen an episode or two of Reboot. 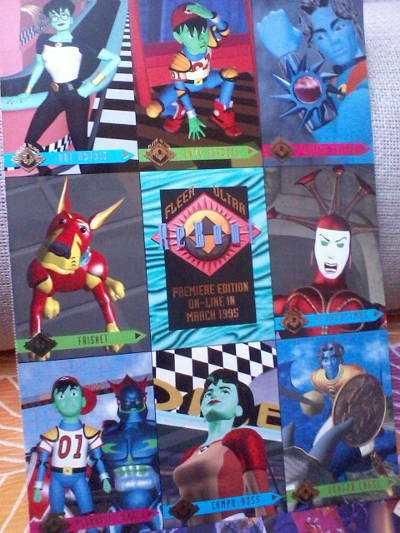 Star Wars ESB Widevision uncut cards from Topps – probably shrink-wrapped with Star Wars Galaxy Magazine, which was also published by Topps. This was such a novelty because, gosh, you had actual screencaptures from the movie!!! Do you know how difficult it was to find screenshots those days? Most published photos in newspapers and magazines were production photos. 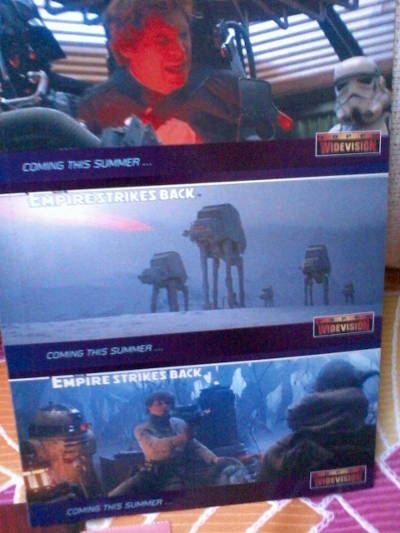 X-Men Series by Jim Lee from Impel. I don’t have the whole collection, but these looked great. It featured the whole X-Men family of comics being published at the time from Peter David and Larry Stroman’s X-Factor, Rob Liefeld’s X-Force and Alan Davis’ Excalibur. 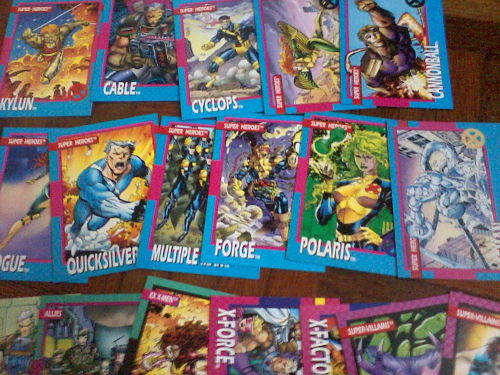 It has my favourite version of Excalibur with Widget, Cerise and Kylun

Star Wars New Visions Topps Cards – Another incomplete set. This was a series of artwork by famous artists as well as art from soundtrack sleeves and old novels. Seen in the photograph below, there are cards drawn by – among others – Walt Simonson, Dave Stevens, Bill Sienkewicz, Mark Chiarello, Brian Stelfreeze, Moebius, Jim Steranko, John J. Muth and Dave Dorman. Topps collected the original artwork in an oversized book which I bought. However my copy was eaten by same termites that ate the Transformers painting as explained before. 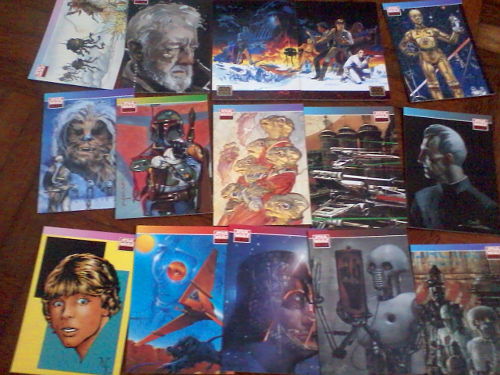 These cards are absolutely gorgeous

Finally, I just remembered that I had a complete set of Star Trek The Next Generation cards that I bought in Scotland back in 1991 or 1992. I’m sure I brought it back to Malaysia, but sadly some time before I got married I couldn’t find it anywhere in this house. I might have lost it or it might have been stolen, I have no idea.

Um… What the-? I don’t remember ever owning nor reading Batman: Houdini… What’s it doing in here? 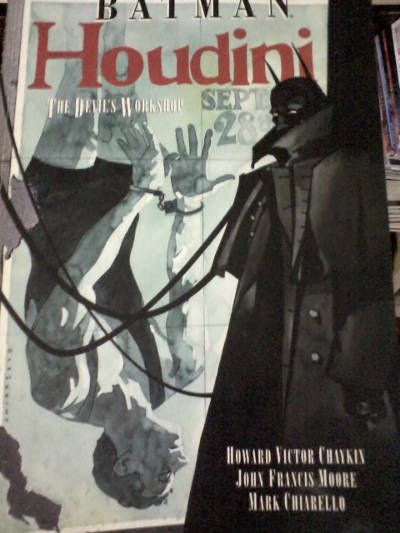 I was about to head back to Kuala Lumpur which is about 3 hours away from Sitiawan when I thought I’d catalogue and leave you with a final photo of what I found in my old comic boxes: 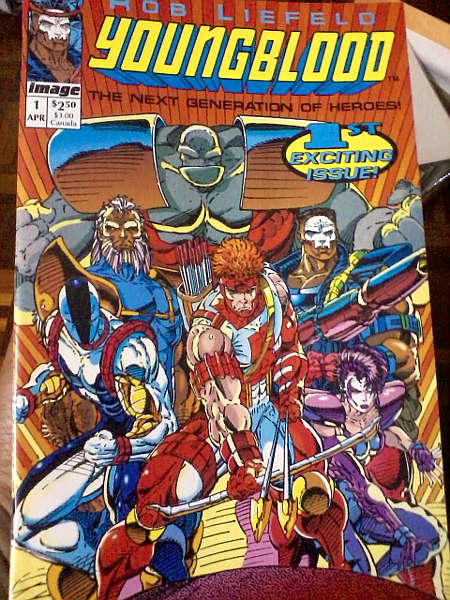 The rise of Image Comics

I own Youngblood #1. You may all begin the lynching.