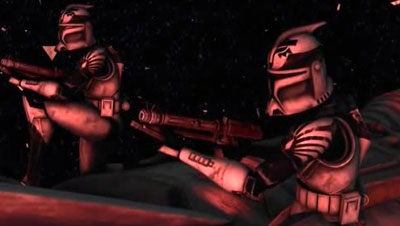 Obviously last week had merely been the gaming group’s test run using a stand alone scenario in a single session. This week, the GM brought out the big guns. Literally.

The Republic fleet has been under attack by a colossal capital ship, known as the Malevolence. Which is why this scenario was titled “Rising Malevolence”. Incidentally the Malevolence is a 7.9 km-long Subjugator-class heavy cruiser, which means the first ship of the line, the Subjugator, was still floating about somewhere in the galaxy. Great job by the GM, cause this gives the rest of us another ship to play with in our own campaigns.

There were seven players around the table. And the GM split them up into two groups. The first group’s PCs consisted of the Jedi Knight Anakin Skywalker, his Togruta padawan Ahsoka Tano and the trusty astromech droid Artoo-Detoo. The second group played the Kel Dor Jedi Master named Plo Koon, an unarmoured clone commander named Wolffe, and a pair of suited-up clone troopers named Boost and Sinker.

Splitting the party and running them alternatively was a risky method to run the scenario. The GM had to ensure the scene switches quickly between active playing groups to prevent the inactive group getting bored and wander off to read the GM’s collection of comics and GURPS sourcebooks.

The scenario began in the Abregado system with Plo Koon’s flotilla (including his flagship, the Triumphant) being hammered and torn up by the Malevolence‘s heavy turbolasers after being immobilized by a honking big ion weapon. Plo Koon and the three clone PCs managed to escape via a lifepod but were now trapped in a debris field orbiting a gas giant. (Although it wasn’t named, I assumed the planet was Abregado-fus, the fourth planet out – the only gas giant in the system.) 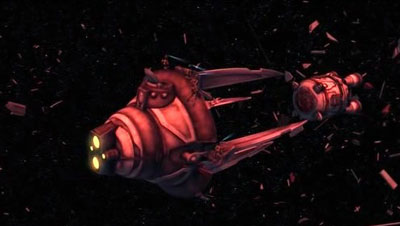 The PCs’ communications skill allowed them to contact another lifepod. But it was a pod that the GM used to demonstrated to the players that the Seperatists meant business. A battle droid-manned Droch-class boarding ship, employed as a pod hunter, was used to crack the pod like a shell, exposing the unarmoured clones within to vacuum, killing them. Sigh. Poor redshirt NPCs. Wait, wrong sci-fi franchise.

The GM quickly switched over to the other party where Ahsoka’s player had just written in the “Connection with other characters” field in  her template sheet that she was close to Plo Koon as a youngling, so in-character she was driven to save her former master. Anakin’s character template, by the way, had passed from the guy who was nominated for a Best Supporting Actor Golden Globe for Life as a House to the guy who almost molested and killed Claire in the first season of Heroes.

In the best tradition of heroes, the PCs defied their superiors’ orders and board the G9 Rigger transport Twilight to fly to the Abregado system to find and rescue Master Plo. However, the debris field made it hard for them to spot small lifepods.

Meanwhile, Plo Koon’s hide roll failed. A Droch-class pod hunter noticed them and approached. With air running out, he led Boost and Sinker out into vacuum. Wolffe stayed inside, but if the pod hunter squished them it would be over for him too. Plo used Telekinesis to position the armoured clone troopers in a flanking position where high blaster rolls killed most of the droids. Then, several quick lightsaber rolls sliced the pod hunter’s pincers and an Alter roll pushed it away. Its 2D starfighter-scale Hull code was not enough to prevent it from being pulverised by a large debris.

Before Plo and the clones ran out of air, a well-spent Force point allowed Ahsoka in the Twilight to use her sensors skill to locate them. They were pulled into the rear cargo hold. Then, an NPC medical droid was used to heal their wounds, especially Wolffe who was wounded because of damage due to breathing toxic atmosphere. Bad Strength rolls will kill you. 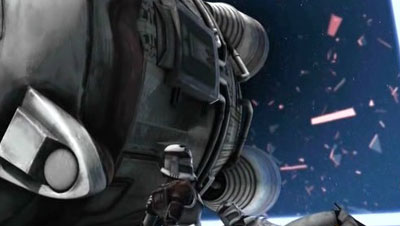 Safe in the Twilight, or are they?

But then, the Malevolence lumbered into range looking for their destroyed pod hunter. Anakin’s Technical attribute roll told him that he had to shut down all electrical power on the ship to avoid detection. But the clone troopers’ players forgot to turn off the medical droid in the infirmary and the Malevolence began to bear down on the Twilight. Anakin’s player gave the clone troopers’ players the evil eye while the GM smirked.

The Malevolence fired its massive ion pulse cannon at the Twilight. Anakin had to spend a Force point to augment his space transports piloting skill. Artoo rolled his astrogation skill but failed, because they were still in the debris field. Anakin used all-out speed and evaded debris to get clear, allowing Artoo to roll again with a lower difficulty number.

Thankfully, the roll was a success and the Twilight jumped into lightspeed before the ion pulse hit them.With the Malevolence intel gathered by the PCs upon their escape, the players prepare for the next scenario by the GM. Again, there weren’t any monsters in this episode. Hopefully there will be in the next.