Every year since season 4 of Smallville, I used to check out the first few episodes to see if it grabbed me. But the novelty was gone, and even the inclusion of Kara Zor-El in season 7 wasn’t enough to sustain my attention.

Season 8 however is a whole new ball game. I’ve not missed a single episode.

Inclusion of new character Davis Bloom that eventually turns out to be Doomsday – which reads terribly as a concept on paper, but is pulled off adequately. A new job at the Daily Planet and a burgeoning romance with Lois – including humorous lively banter instead of the unbearable melodrama with Lana. More DC Comics characters as guest stars like Plastique and Maxima.

And after the mid-season break, for the first time ever: the live action appearance of none other than the founding members of the Legion of Super-Heroes, flight rings and all: 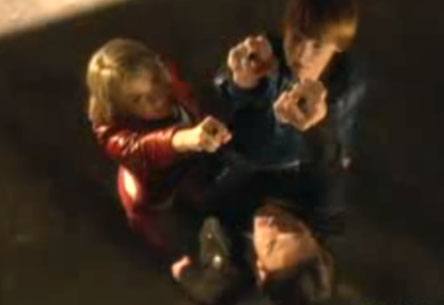 … with apparently Persuader of the Fatal Five in tow, complete with his signature weapon the Atomic Axe.

Posted in Comics, Trawling The Net, TV and tagged Comics, The Internets, TV.