In the first Terminator movie, if time travel convention is to be adhered to, just before John Connor’s troops stormed Skynet and was on the verge of destroying it in Timeline A, the human resistance is screwed the moment the T-800 Model 101 went back in time moments before Kyle Reese did. What actually did happen? Was that Skynet destroyed in Timeline A even as the T-800 terminated Sarah Connor in a new divergent timeline (Timeline B) in which case John Connor never existed and Skynet was triumphant? From Timeline A, Kyle Reese went back and stopped the Terminator creating Timeline C. Do all these three timelines exist simultaneously?

If you didn’t stop to think about it all however, thanks to the superb direction, story and visual effects – if you are sufficiently entertained – then Terminator was a flawless movie. Similarly with Terminator 2: Judgment Day, the movie was entertaining enough that you don’t question how different Skynet in Timeline C was from Timeline A since the new timeline had a technology boost from the future (the T-800 chip and forearm).

In Terminator 3: Rise of the Machines, we learn that the destruction of the T-800 friendly and the T-1000 (along with the original T-800 chip, arm and research surrounding it) only delayed Judgment Day. Skynet developed into a software supported by many servers worldwide. Killing it was near impossible and time had run out.

Where does it stop? What are the constants? Skynet: Was it development the supposedly inevitable existence of a machine singularity? John Connor: Why is he so important? Why couldn’t anyone else wear his shoes in the other timelines? What about the unknown model named Cameron in The Sarah Connor Chronicles TV series who came from the future only to use a much more developed time machine allowing them Sarah and John to jump 8 years into the future, creating Timeline D – where Sarah Connor avoided death from cancer that she would face in Timeline C? The TV series cleverly played up on the multiple timelines by having Terminators and resistance fighters who initially appeared to be from the same future but ultimately discovered that they were from slighty divergent timelines. (Timelines E, F, G and so forth?)

And that’s where we come to Terminator Salvation, directed by Joseph “McG” McGinty Nichol – who earned points from me for producing Supernatural. Which timeline was this? How did Marcus Wright come to be after he was put to death in prison in 2003 and his body released to Cyberdyne Systems for research?

I was expecting the worst, but despite a weak script and a glaringly obvious cobbled together quickly story, he managed to make the best of it and I was sufficiently entertained. 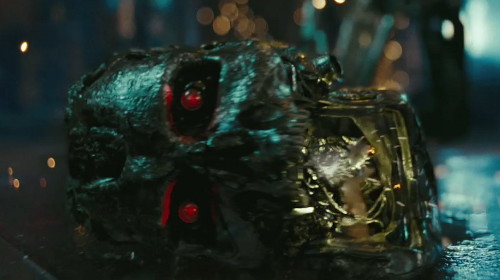 Things that made me go lolwut?

The fifth movie appears to be under development. Let’s hope McG is able to wrangle his writers, cast and crew a bit more deftly so as to deliver a much better film than this.