Like DSA 2006 back in April, we were at another defence exhibition only this time in Karachi, Pakistan. My apprehension was soon laid to rest as the local organisers as well as the other foreign exhibitors who were great folks whose company I enjoyed. Whenever we got together, there usually was loud chuckling and sometimes there were incredible belly laughs, which I believe began for the first time when we tried to figure out what the acronym “CIP” actually was.

There were Barry and Martin from Australia, John from England, Bernard from the Czech Republic and sometimes we were joined by Jean-François from France, who was our neighbour in the exhibition booth next to us. All of us were ably and excellently cared for by our Pakistani attachés (so to speak) Shah, Shamir and Arsalan. 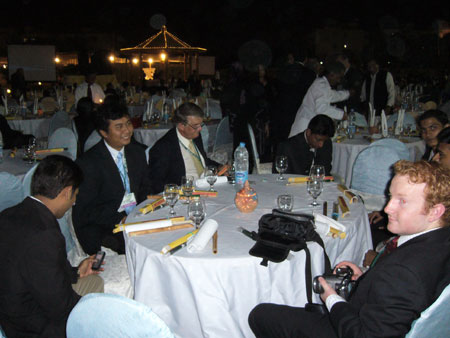 At the Organiser’s Dinner Reception 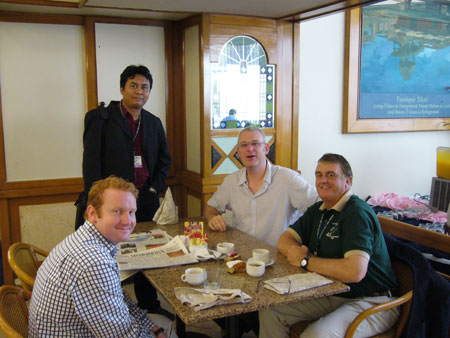 At the Jharoka Restaurant at the hotel 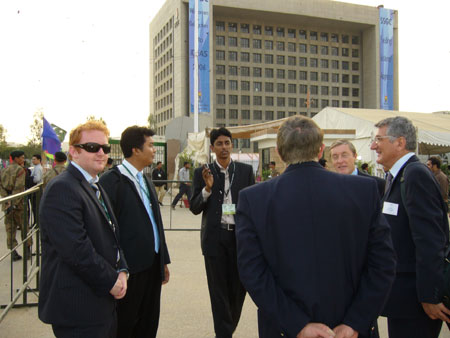 Forming up before getting on the return bus

I was chained to the booth most of the time because the sheer number of visitors at the booth. Hikam suggested I record myself and replay the whole presentation to the regular visitors with a tape recorder, an idea that had merit. 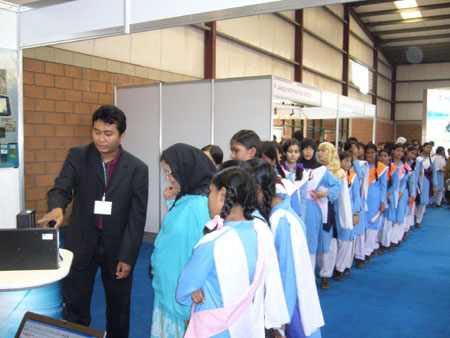 No I didn’t have to explain to each, one at a time… thankfully

When I had the time to walk around, I monkeyed around with the displays at the FN Herstal exhibition, which manufactured Stargate Command’s P90 PDWs, among other things. 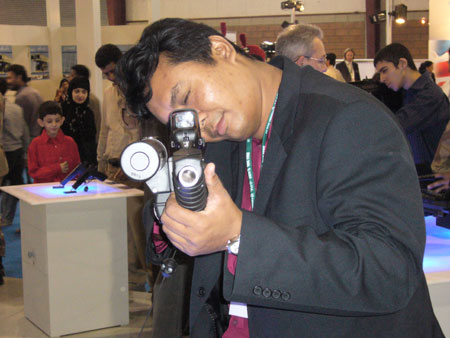 I believe this is a FN 303 less lethal weapon 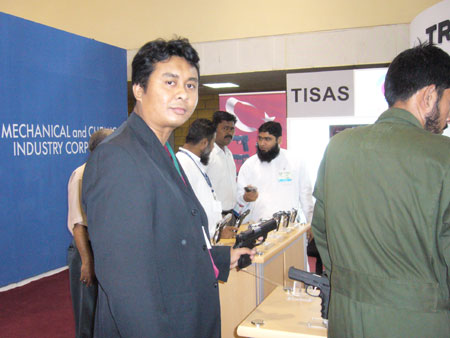 I don’t remember what this is 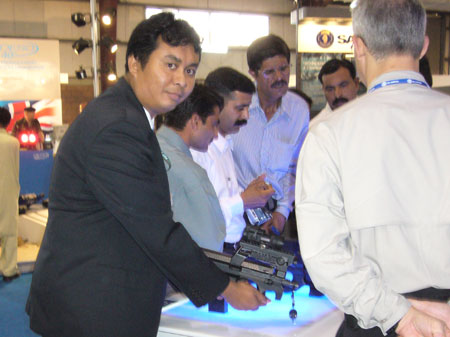 Once, I went postal on the people who came to pillage our booth for souvenir and brochures for no reason other than collecting them. I went postal employing one of these babies. It was a sweet machine. 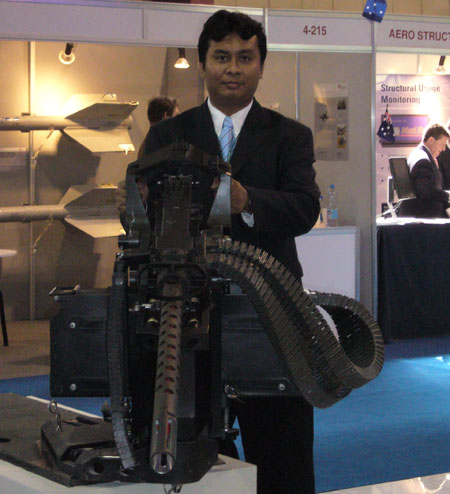 Ya want a piece of me?

Meanwhile, Hikam made friends with this sexy and fun-loving thing, which we believe to be a remote bomb-sensing robot. 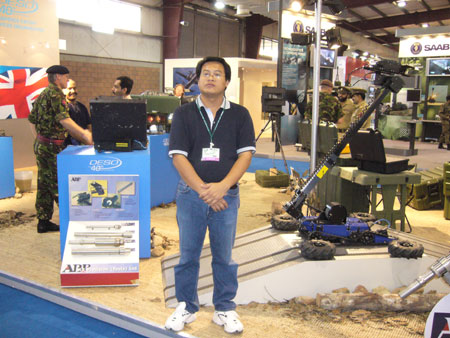 At the British Army encampment

Of course when things got slow Barry, Martin and the Pakistani boys brought out their newly-bought cricket bats and began to play cricket at their end of the pavilion which ended with them being chased by officials with even more cricket bats. Or was it being chased by crickets and bats, I can’t really remember. 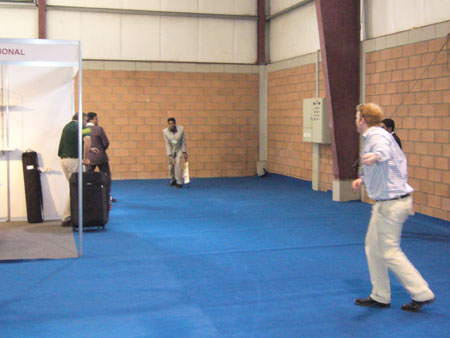 The bag then became the wicket

I seem to vaguely remember tanks out in the outdoors displays. 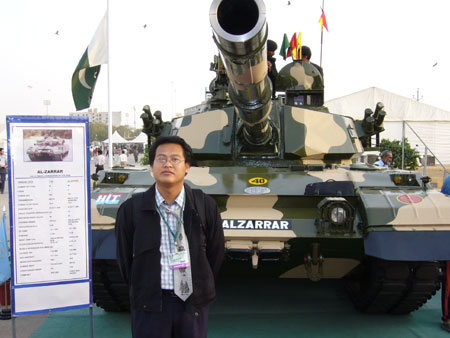 This is known as the al-Zarrar obviously

On the last day we were accompanied (some say “hijacked”) by this flight attendant who stayed at our hotel and wished to visit the exhibition. We thought it was okay because we were protected from her by a host of Pakistani military and police forces. 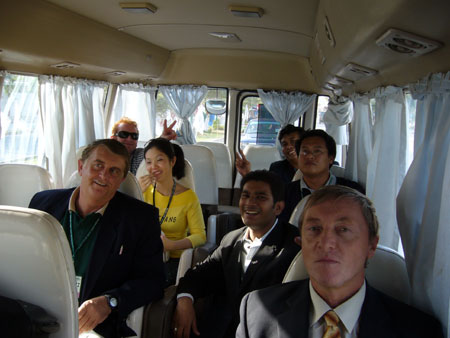 Last day on the bus back to the hotel

Much too soon we found ourselves back at the hotel, giving our Pakistani attachés a treat at the hotel restaurant. Hikam and I just had a drink cause we already had Chicken King for late lunch. 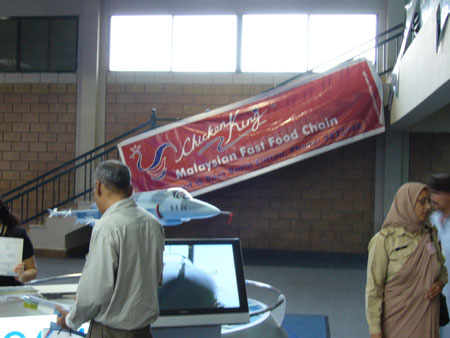 I think there’s one in Batu Gajah. Anyone else remember locations of others?

Soon we were on our flight bound for Kuala Lumpur with bags full of dirty laundry… and souvenirs. Or was the dirty laundry our souvenirs? I can’t tell. As long as I’m back with Ain, Irfan and the rest of the family waiting at home for me. 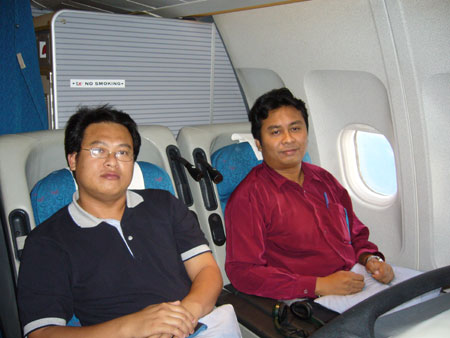