This afternoon I had the pleasure of gaming at Mage Cafe with the GOKL gang. Ivan was gamemastering Warhammer Fantasy Role Playing 3rd Edition, using the introductory adventure Fantasy Flight Games put up on their website, A Day Late, A Shilling Short. Here is a close up of the dice we used: red Reckless dice, green Conservative dice, white Fortune dice and black Misfortune dice. The Characteristic dice and the Expertise dice and the Challenge dice (blue, yellow and purple respectively) are located just away from the camera’s POV: 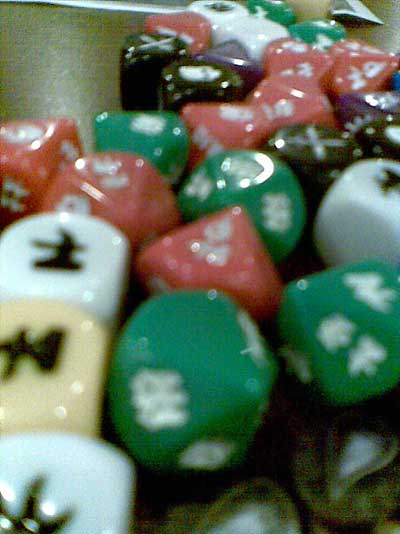 You roll the Dice Pool based on your character’s stats and tally them up. Some dice cancel other dice out, like Fudge dice. Then you determine the outcome with the remaining dice. 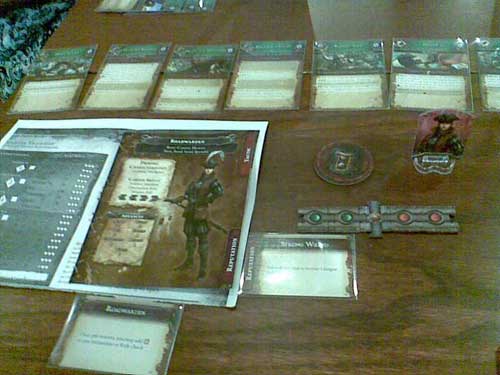 Here’s my player character, Birgitta Tageslicht, the Roadwarden chick whose father was recently slain by beastmen in the woods. I played this woman as one who’s reckless into battle to prove herself to the memory of her father. Of course, she’s not in the best of minds because in our first encounter, we had a band of beastmen to defeat, which she believes may be the ones that killed her father. I ended up almost dying caused by a dislocated shoulder and a blow to the head for jumping headlong into battle. 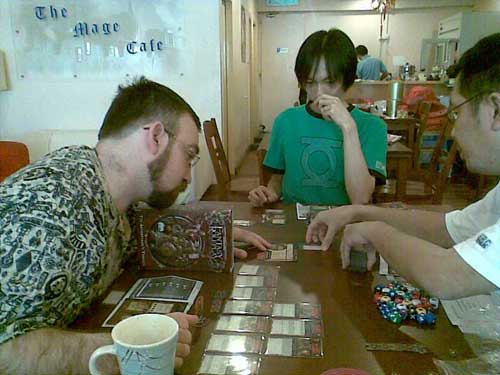 Doug played the Dwarven Trollslayer, Adrian played the Elven Envoy and Ivan GMed the game. Players also act using action cards to perform specific acts which gives them special benefits if the dice rolls well, but alternatively would cause even more of a disaster if they roll badly. For example, I used the Perform a Stunt action card to grab a branch above me, swing feet first into a wargor to knock him off the tree.

The game is certainly not for beginners to role-playing. A GM will need to practice interpreting the dice rolls and be aware of modifiers based on a characters’ Stance, Fatigue, Stress and other factors before getting the hang of it. Despite some bugs such as a bad Assessing the Situation roll causing Stress on the character, I think the combination of using all the tools can be a unique roleplaying experience in the Warhammer setting. I hope to play more in the future.

Also, if you meet a Dwarf carrying his father’s axe in one hand and his father’s other axe in the other hand, walk way fast. Cause, I’m sure even beastmen now flee the other away if they see him coming.