After last week’s surgery, I had splint and padding up my nose to hold things together as the parts within healed. The doctors gave me little bottles of saline solution and a syringe to douche my nasal cavity to cleanse it of blood, snot and other assorted blood-covered snot. 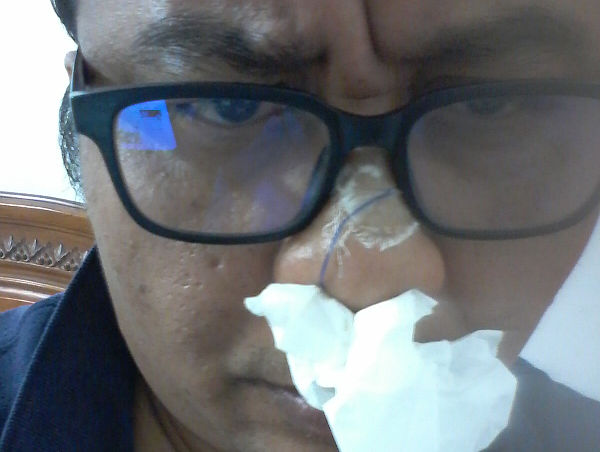 The tissue paper is to stop blood from dripping out

On Saturday, after my regular nose douche and a shower I felt something shift uncomfortably up my nose. The string taped to my nose which connected to the splint was slack. Something sharp and stinging had moved down my right nostril. More blood than usual was dripping down my nose.

We went to a clinic to get it looked at, but the doctor there referred us to the ER at the hospital. There was a referral letter and all. The ER doctor who attended me called up the ENT physician on call. The ENT doctor (who correctly guessed who I was over the phone) said that if there was no excessive bleeding, I can go home, but have to return to the ENT clinic for a check Monday instead of Thursday. 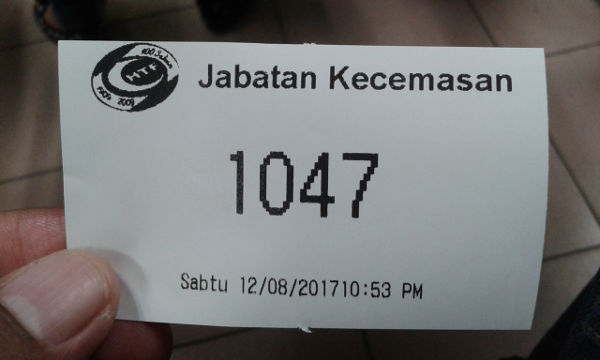 However, the stinging pain in my right nostril disappeared Sunday morning. Did the splint move back into its normal position as I slept? Was the pain some injury that healed itself overnight? The reason will forever be unknown to me.

First thing Monday morning (well, second thing after breakfast), we were back at the ENT clinic at the hospital. The chief ENT specialist decided to remove the stuff up my nose and further explore their handiwork with an endoscope. I thought it would hurt more as they did inform me before the surgery that it might sting momentarily, but there was a slight pull and my nose was clear with minimal pain.

All appeared to be well.

I need to keep douching my nose apply the nasal steroid spray daily, to ensure the nose heals proper and to suppress polyps regrowth respectively. I hope all goes well as I have a class to teach on Tuesday which I could not postpone any more.

Finally, the spot on my right hand where the teddy bear-encased cannula was removed five days earlier still hurts for some reason. I wonder why…