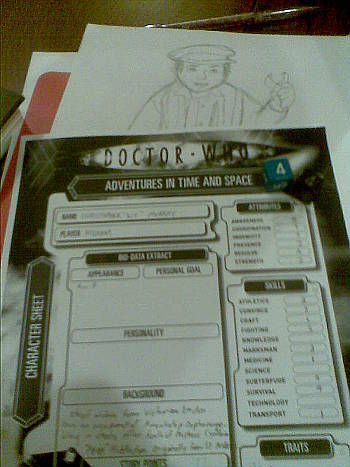 Doctor Who: Adventures in Time and Space

On Sunday I played in Cubicle 7’s Doctor Who: Adventures in Time and Space role-playing game. Usually Doug GMs, but Kai guest-GMed the game I was in.

Kai deliberately GMed the session rules lite and with a more free-form style which allowed for cinematic fast play.

You also have Traits, giving you some special abilities or bonuses to your rolls. Traits can be good or bad, with names that range from the simple Attractive, Brave and Charming to the more esoteric Time Traveller and Run for your Life!

If you opt to take Bad Traits, such as Clumsy, Cowardly and Phobia, you gain extra points to put into more Good Traits or into your Attributes and Skills.

Those are the basic rules. 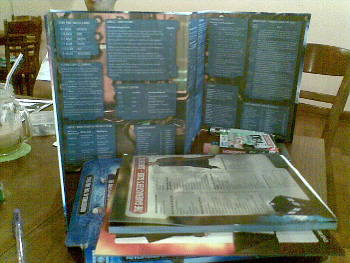 Our Doctor Who game is based on the webcomic Dare Sensei, where our favourite Time Lord is instead a Time Lady. In the first game, she picked up a bunch of young Japanese schoolkids – Yuuki Nagata, Gordon Chiba and Danny Uzumaki – as Companions at Hayato the Still Town, which had a bad Auton infestation. In the following game, they picked up Dominic the Xenologist from the 25th century and Flo the Judoon enforcer, which led up to this session.

The party lost Danny in the time vortex outside the Sensei’s TARDIS and he ended up in London 1900 and captured by Torchwood.

The TARDIS quickly arrived in London to look for Danny and discovered that this London was not the one they had known. This London’s East End was a slum filled with aliens refugee, such as Judoon, Ood, Weevils and Catkind, that came out of a Rift in spacetime. Everything was a hybrid of turn of the century industrial age technology and exotic alien technology from the future. This part of London was called Rift Town, and a branch of Torchwood had been given the task of policing it.

As the party looked for Danny, they meet Patricia McLenner – a Torchwood agent, transferred and on her way to join the Rift Town branch – who told them that Queen Victoria was still looking for the Sensei’s head on a platter since their last encounter, and Kit Murray, a street urchin who attempted to pickpocket the Sensei’s psychic paper but lost it to his nemesis, a Catkind street waif named Birdy.

Then the Torchwood station exploded killing every member but Patricia. They all came together to investigate the mystery behind the station’s destruction. And as a bonus, they discover Danny alive in a morgue coffin under the rubble of the building. And it had been a year for Danny since he first came to London! He was able to recall being in a room with fur carpeting and a disco ball above him, and a robotic dog was ushering him to meet “the Mistress”. 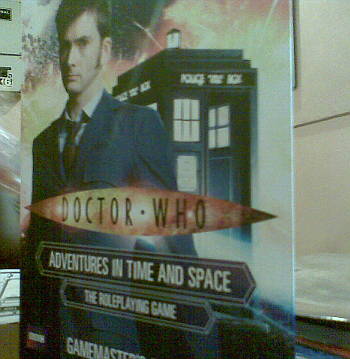 Many things happened in the course of the adventure. Patricia used a Resurrection Boot to interrogate the dead members of Torchwood. They encountered a Judoon Rift Town Warden which was revealed to be a Slitheen infiltrator in disguise. It was revealed to them that the current director of Torchwood might be the bad guy that caused the Rift and destroyed the Rift Town station. And finally as the others threw drums of dye and various large machineries at bad guys, Yuuki used a Sonic Screwdriver to seal the Rift that was growing bigger within a D&R Textiles factory.

With the Rift closed, the Sensei and her Companions said their goodbyes to Patricia left to return to their native timeline where no aliens live in London in 1901. Ultimately, Patricia is promoted into the de facto commander of Torchwood Rift Town in this timeline, supported by Flo who opted to stay behind as the new Rift Town Warden and Kit who opted not to take up on the Sensei’s invitation to travel through time and space.

The game was very fast and cinematic, allowing players to do a lot of things in the best of Doctor Who traditions, like running in small streets or corridors, chasing or being chased by something. The Sensei was an NPC and like her Doctor counterpart guided his Companions and allies into doing things the non-violent way. The rules was just perfect to allow for anyone to use alien supertech like the Sonic Screwdriver without technobabble and a over-complicated system to compliment the technobabble.

I hope next time I get to play in an adventure set in a higher technology level (the 51st century perhaps?) and see how the rules accommodate that tech level.