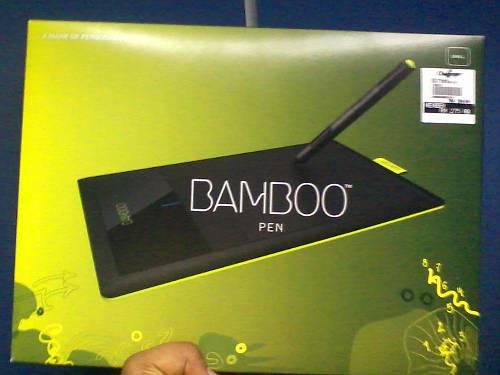 The box too wasn’t made of bamboo

Once upon a time, I bought a Wacom Graphire 3 graphics tablet. With its stylus I made many a drawing, til its USB cable died screaming. Actually it died quite some years ago. In the interim, @plasticstitch had told me he had an unused Bluetooth-connected Graphire tablet and sent it by air mail to me where I made many more drawings. This device acted finicky with a Linux operating system, and I was using an Ubuntu distro. One day I upgraded to Ubuntu 10.04 by dint of installing the Ubuntu fork named ArtistX 1.0, and the device refused to talk via Bluetooth to the tablet.

Today I bought a new tablet, a Wacom Bamboo Pen. Its matte-black housing looks sleeker than the silver-hued Graphire. I’d prefer to have purchased a Wacom Cintiq 24HD, but the Bamboo Pen is the only one I could spare cash on. Incidentally it’s the cheapest they had. 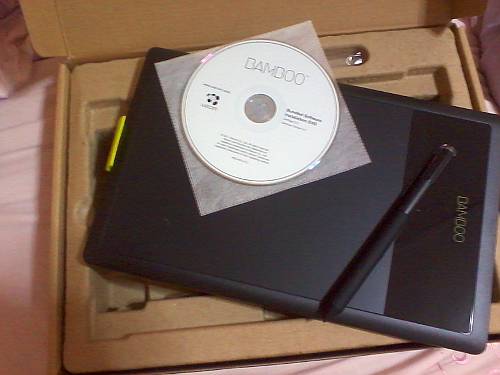 Inside the box are STUFF

Having the USB connection instead of the Bluetooth would make it less finicky, but soon I discovered that even with the USB, the Bamboo Pen could not communicate with the ArtistX operating system despite all I could to read about it and troubleshoot it.

I had to find a new way to digitally paint once more using the tools I had.