It was a fine sunny day as we sped southbound the Gua Musang road from Pasir Mas to Kuala Lumpur. There were still thirty kilometres or so from where we were to Gua Musang. Sparse but sometimes breathtaking limestone hills flank us, each hill seemed ankle deep in the greenery of oil palm trees.

The radio was on full blare with Raihan’s Puji-pujian and the road was following along a curve. Suddenly, a shocking sight was revealed to us. 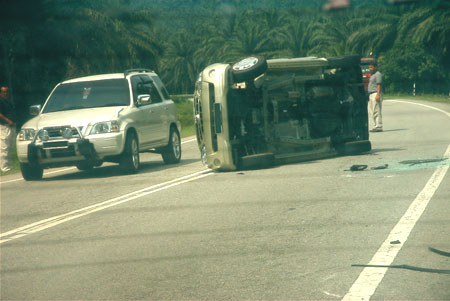 A MyVi on its side

We avoided colliding with the car, passed it and parked beyond.

It must have had happened very recently since we were the first car that stopped to give aid. There was no other vehicle apparently involved, therefore it must have been barrelling down the road with some speed. It must also have rolled over at least once since its roof was pressed down into the car.

There were three occupants in the car, and they were all relatively unhurt and walking about, considering what the car looked like at the time. Ain called the Gua Musang police as other vehicles stopped to lend a hand. Locals who could help them better than we could also converged on the spot with some of them directing traffic and calling for help.

We departed the scene when it looked like we were getting more in the way rather than helping. Irfan, of course, didn’t stop talking about the accident for 10 minutes after we left.