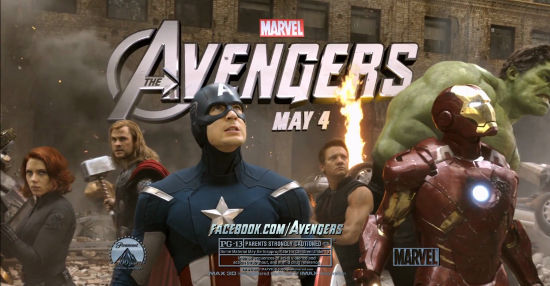 After five years of buildup by Marvel Studios across 5 movies from Iron Man (2008), The Incredible Hulk (2009), Iron Man 2 (2010), Thor and Captain America: The First Avenger (both 2011), we’ve finally reached its culmination this year in The Avengers for the Marvel Studios’ movie continuity, also know as Earth-199999. (Regular Marvel Universe is Earth-616, by the way.)

Here follows a SPOILER-FREE review of the movie co-written and directed by Joss Whedon. Heck, I wont even give away anything by having a synopsis.

Let’s start by addressing what worried me before watching this movie:

Will they sideline Cap what with Iron Man being a more popular character in general?

Cap totally earned his keep as leader and tactician of the Avengers. He proved his mettle onscreen several times during the final battle, not to mention a scene showing why even civilian authorities will listen to his orders.

Will Mark Ruffalo fill Edward Norton’s shoe as Bruce Banner in this continuity?

He plays Banner in a totally different way than Norton, who plays him as driven. (Ang Lee’s Hulk which is from another continuity has Eric Bana as a haunted Banner.) Ruffalo portrays a very reserved Banner who knows what he’s capable of and the power he can unleash, but tries his best to hide winces with jokes and smiles. The Hulk on the other hand, also played by Ruffalo by motion capture, has never been more loveable in the end. Yes, loveable. Badassed loveable. The audiences loved this Hulk. This Hulk will definitely get sequels.

Does the movie follow a cliched “get the band together” structure?

No, because the movie starts with every Avenger on a different path that leads them together as a team with SHIELD and Loki acting as a catalyst, although it does have the cliche fighting each other a bit before standing down and working together.

Are every Avenger and their skills get featured fairly?

Oh yes! Everyone gets to shine and then some.

“The Avengers”? Do they even avenge anything?

They do at that.

There’s a lot of AWESOME shots in the trailers! Have they shown everything that they could in all the trailers combined?

Unlike 2011’s Green Lantern movie, where you could figure out the whole movie by watching all the trailers and featurettes, The Avengers have edited their trailers so a lot of the context couldn’t be guessed at. Then you see something new that’s awesome and you think, that’s it. And then another mindblowing scene pops up and you’re done. But then yet another scene is shown, not seen anywhere in the trailers that blows your mind, and you’re spent. And suddenly- … and so on and so on.

I did not like Ang Lee putting panels up on screen to simulate comic books in the Hulk. Telling a story across comic book pages is different from movie storytelling. But Joss Whedon used to write Astonishing X-Men, and he translates a lot of comic book visual tropes well onto the screen. Characters enter into fight scenes, arriving into battle while striking a pose (and not looking ridiculous at it). Superpowered punches through walls. Snappy dialogue spoken at just the right time as punches are thrown.

And you know those double splash pages of everyone in battle you sometimes get in comics? Yeah, you get a couple of those here where camera sweep across the battle and things happens moving from left and right, all framed and tracked perfectly.

One more thing: This movie is pretty funny. Lots of humour in character dynamics, in situations, and even in playing Galaga.

Will there be any signature Whedonisms?

Remember in the Firefly episode “Train Job”; the kick into the turbine engine scene? There’s a scene that plays out nearly similarly. It gets the loudest applause. You’ll know it when you see it. You can’t miss it.

But what about being “a leaf in the wind” but not as required of Korra?

Can’t wait to pay to watch it again.