In West End Games’ The Star Wars Sourcebook (1987) written by Bill Slavicsek there is a four-page technical write-up on the X-wing fighter. The text is an order of magnitude more detailed than any other write-up on the Incom T-65 X-wing ever written and filled with an abundance of elements that can be adapted and used by gamemasters for any Star Wars RPG scenario.

What has been vexing me for a quarter of a century are several “Star Wars-esque” non-English words used in the book for names of equipment make and manufacturers. Even if the spelling does not reflect it, when they appear to be transliterated words from my own native Malay language. 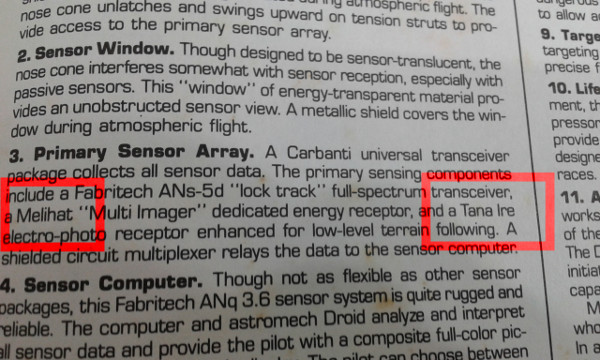 Tana Ire and Melihat are both flight sensor manufacturers who have developed sensory equipment for the X-wing fighter.

Malay: Melihat, (IPA:/məlihat/) is translated as “seeing”, with the me– prefix of the word lihat making it the present participle of the verb “see” – but not a gerund. Never a gerund. A sensor sees, you see. 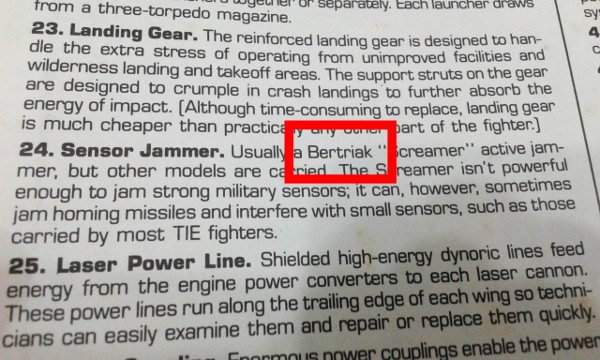 Bertriak is a manufacturer of the “Screamer” sensor jammer. Malay: Berteriak (IPA:/bərtəriaʔ/) is a derivative verb from the work teriak, which means crying, or screaming. Is this not how jammers work anyway? 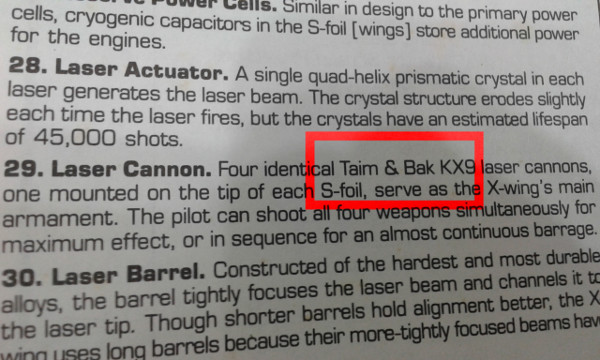 Taim & Bak is a manufacturer of ship-based weaponry, specifically the KX-9 on the X-wing and the IX-4 on the Y-wing. Malay: Tembak (IPA:/tembaʔ/) is literally “shoot”. This corporation would have been literally named “shoot” if not for the ampersand between the two syllables. 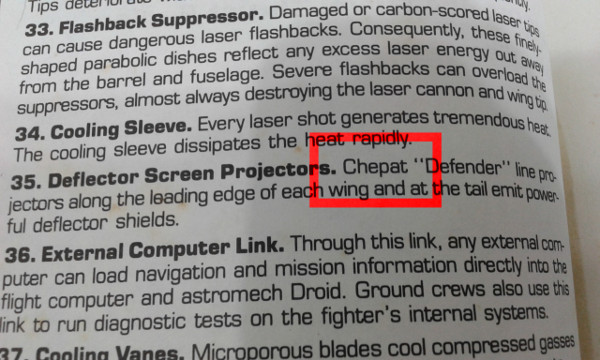 Chepat – renamed Chempat in later sources for some reason – manufactured the “Defender” shield projectors. Malay: Cepat (IPA:/t͡ʃəpat/) is “quick” or “fast”. Perhaps the Defender shieds are quickly deployed in battle – I dunno… I got nothing. 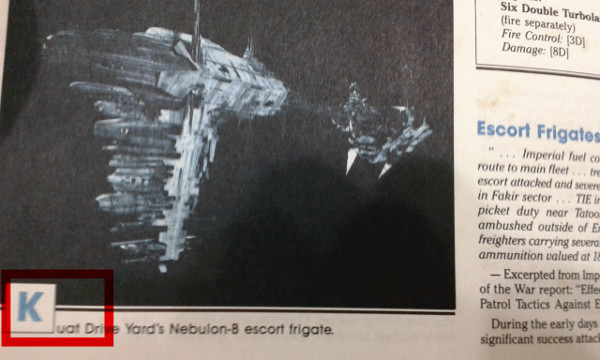 While cepat translates as “quick”, another manufacturer elsewhere in the book translates as “strong”, namely kuat, as in Kuat Drive Yards based in the Kuat system. Kuat is definitely a strong presence in the lore of Star Wars with many vehicles designed by it, including the Imperial Star Destroyers we see on screen.

Also, I ran a small RPG campaign in the Kuat system once.

I wonder if there are other Malay words hidden within the non-English proper names in the Star Wars Sourcebook, perhaps hidden by transliteration of the word. So now the question is: is all of this a coincidence, or did Bill Slavicsek have a Malay dictionary with him when he was writing the article up?

After this article was published, I thought I should email a query to Bill Slavicsek with a link to the post. Shortly after, he graciously answered:

Turns out my co-author Curtis Smith traveled to Malaysia and other locations as a child with his missionary parents. He wrote the X-wing section and must have snuck in those words when I wasn’t looking. I thought he just made them up! Even after all these years, I’m still learning new things about my Star Wars Sourcebook!

And there we have it. Thanks for the clarification, Bill Slavicsek!