For International TableTop Day, I thought I’d run another a continuation of BareBones Fantasy RPG campaign for Irfan. Thus, Irfan’s Jake Hastur the halfling wizard and my GM-run NPC Finn Riverwyld the warrior-scholar go once more unto the breach in the city of Kingsbridge in the Keranak Kingdoms. 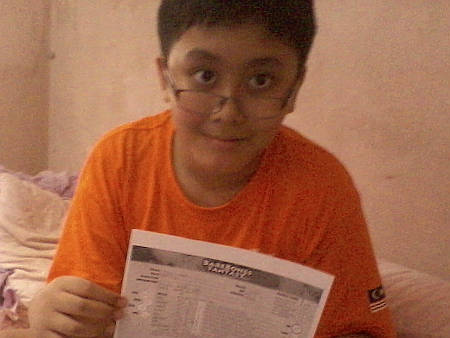 The game began at approximately 1000 hours local time on Saturday morning (+8 hours UTC) and we stopped for lunch at 1200 hours. We thought we could continue later at night, maybe after dinner, but it was not meant to be. We will continue tomorrow.

Session One: Journey to Netharak Island

BareBones Fantasy uses the d00 percentile system, with percentile Ability and Skill rolls, while damages are sum of d10 rolls.

Before we began, Finn bought a new longsword. Jake desired a spear, so Finn gave him his own which he had not enough Warrior (melee) skill to wield properly. Irfan spent his Development Points to bring Jake’s Strength from 45 up to 50 so he can use his spear effectively and without any Strength penalty.

The story began with the duo being summoned to the House of Duchess Lyla Keranak at the swanky part of Kingsbridge.  The Duchess would pay them 250 gold pieces each (100 in advance) to search for her missing younger brother, the House’s captain of the guard Kane Keranak. They are to return Kane back to the House, or if he was dead bring his ring back to her. He was last seen going on an unknown quest to the Isle of Netharak, which Duchess Lyla pointed out to them on the map. When they reach the island, they are to report to a Mr. Bonewall in the fishing village of Dronak, who will report of their arrival to the Duchess via a message hawk, and let them know where Kane Keranak journeyed off to.

After paying the stable 2 gold pieces for taking care of Jack the horse, they both rode for a day westward to the foothills of the mountain range know as the Shielding Wall. Finn’s successful Scholar roll revealed that the mining town of Hammerclash was nearby.

They arrived at Hammerclash at nightfall, but there was no light from the city and no one opened the gates for them. Leaving Jack outside, they climbed up to the gate guard tower and discover a dead guard with necrotised flesh surrounding bite marks. Jake picked up the dead guard’s heater shield with the Hammerclash sigil. There were more rotting corpses in the streets.

A sound in a cookware seller’s shop attracted their attention and they discover a young woman, a survivor who locked herself in a larder. She told them that the miners dug into a new cave in the mountain and released an evil creature into the tunnels and out to the town. But before she could elaborate, there was another sound that came from within the shop. Jake and Finn, weapons drawn, checked the shop aisle by aisle, a step ahead of something trying to hide from them. But when they thought they had cornered it they found nothing. Thanks to failed rolls, they did not look up and notice a giant spider on the ceiling poised to attack them.

Jake tried in vain to knock the large arachnid off his back. Finn could not strike it with his sword because of its proximity with Jake. The spider attempted to bite Jake but its venomous fangs punctured through his heavy leather collar but missed the skin. Then Finn struck the creature’s head successfully, so it slung a tangle of web at him from its butt which Finn easily evaded. Finn told Jake to use his magic. 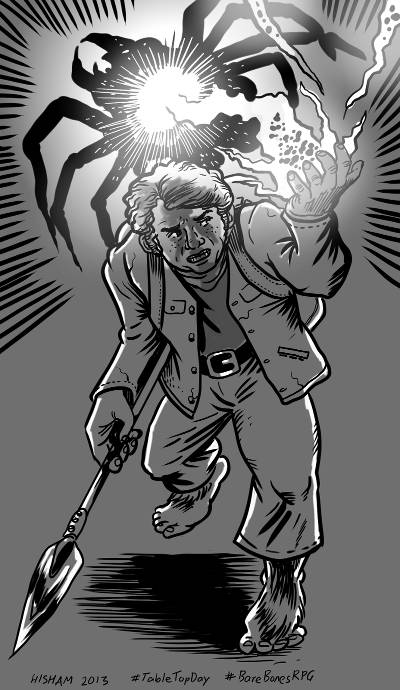 Jake then concentrated and threw bolts of lightning over his shoulder at the spider, which was sent flying down the aisle in a shower of sparks. Hurt but still alive, it landed with eight legs down and prepared to launch itself at Jake again. Finn attacked from another direction, his blade stabbed the spider’s abdomen. It fired another burst of web fluid, this time successfully entangling Finn in a coccoon. But before it could attack again, another lightning discharge from Jake connected and the giant spider exploded into a fiery ball. (16 Damage against 5 remaining Body Points!)

The danger was over. The survivor, who came out of hiding from the larder and identified herself as Reela, thanked them. Together they found twelve more survivors. They pooled together resources to hold a small feast in honour of Jake and Finn. In the morning, three of them would ride to Kingsbridge to report what happened and ask for help. A young man Thorak would escort them over the Shielding Wall using a known mountain path. The remaining townsfolk would help bury their dead.

After replenishing their rations, Jake, Finn and Thorak spent two days going over the mountain where they came to the seaport of Three Reef facing the vast, blue Tarkonian Sea. They thanked and bid Thorak farewell as they entered the seaport. Finn’s inquiries led them to one Captain Bob Pigeon of the cargo sloop Mother Hydra who would take them to Netharak Island for a hundred gold pieces.

Out of the three days Captain Pigeon said it would take for them to reach Netharak Island, the first two days went without any incidence. An hour before the third sunrise, a storm threatened to drive the Mother Hydra into a cluster of coral reefs. Finn tried to help the crew to help secure the mast rigging, some of which was lashing away in the wind. Jake concentrated to cast his Control Weather spell to calm the winds, however it was too overwhelming. A loose rigging pulled Finn into the air (I failed a Strength roll) and slammed him back onto the deck, injuring him (costing him six Body Points). But before the ship tore its hull on coral reef, the exhausted Jake ran to the side of the ship and let loose a great big lightning bolt that disintegrated the reef into fiery debris.

Captain Pigeon thanked their ship-saving efforts and ordered the ship’s doctor to tend to Finn’s lacerations and bruises. 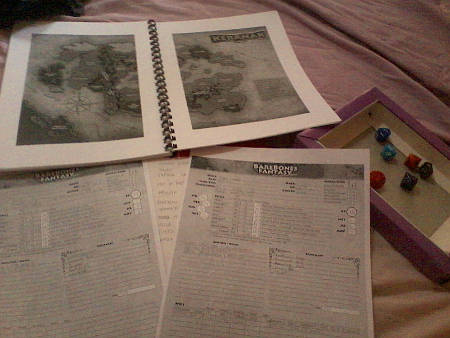 Upon berthing at the fishing port of Dronak, they bid the captain farewell and asked around for Mr. Bonewall, which led them to a brick-and-mortar house among wooden fishermen’s huts. They identified themselves and Mr. Bonewall allowed them to enter. After writing on a scroll that soon flew off on a messenger hawk, Mr. Bonewall welcomed them to stay overnight.

Tomorrow morning they would set out northwest to where Kane Keranak was last seen headed.

To be continued next session.