Like the space slug, the barri is another beast that lives in vacuum. A barri breaks down asteroids using its acid secretions with its mouth and absorb its nutrients. It can also propel itself by expelling gaseous waste underneath its quadridactyl base. (Yes. It farts though space between asteroids.) Being semi-sapient, it can form telepathic bonds with spacers allowing them permission to hitch intersystem rides on the hull of starships. It can also bestow instinctive astrogation figures to their mind-bonded spacers, giving them faster, better routes through hyperspace.

The creature first appeared in West End Games’s Creature of the Galaxy in 1994. Its write-up and D6 stats can be found at pages 12-14. I have converted them (more or less) to Fantasy Flight Games’ Edge of the Empire RPG system here.

Because the central theme of Edge of the Empire is spacers making a living in the galaxy, the barri would be a good creature to encounter in asteroid fields or in a cometary fragment when the navicomputer of a players’ ship is busted. What if the barri has its own agenda? What if the barri decides to jump to an accretion disc of a black hole. 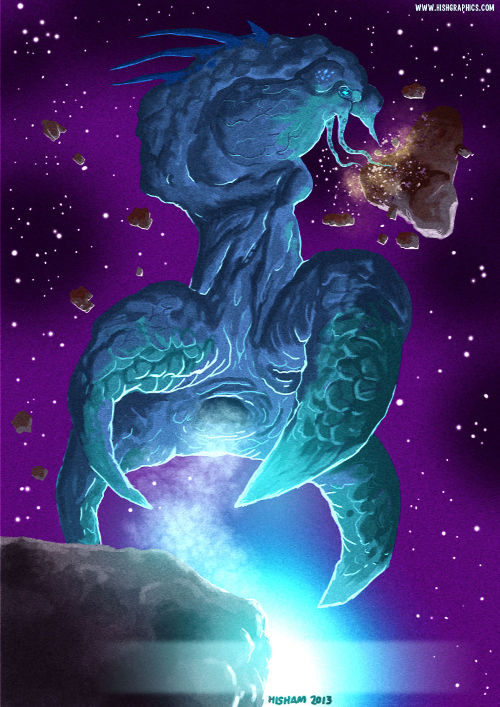 Star Wars Edge of the Empire

If a barri establishes a temporary mind bond with a space pilot, the pilot may fight for control of your shared skills. The pilot rolls Astrogation skill against the barri’s pool of of Intellect 2, Astrogation 3, which translates to 2 Challenge (red) dice and 1 Difficulty (green) die. Upon the results of 2 Threats, the barri takes them to a place it wants to go to. Upon 1 Despair, the jump destination has some sort of immediate danger, as narrated by the GM. Examples: a space battle, a dense asteroid field, junk cloud, volatile gas field, close to a black hole or a star’s photosphere.
Silhouette: 4
Attack:
Corrosive spittle (Ranged Light, Damage 5, Crit 4, Range [Close], Note: After initial hit Damage 3 every round until acid is washed off.)