A Night At The Opera

Last time (a year and 4 days ago in real time), despite being badly injured and walking on crutches, Detective DJ Stark (played by Irfan) succeeded in thwarting the scheme of the Cult of the Pale Nurses in their bid to summon the extradimensional being Sharakh-Kheth from crossing over into our universe and utterly demolishing the Saint Agatha Medical Centre in Brisbane, San Francisco.

(Yesterday afternoon we continued the Call of Cthulhu RPG campaign to see how Detective Stark was faring. Polyhedrals and paperminis deployed, Irfan wondered what Lovecraftian creatures and machinations he would encounter in this session. It was six weeks later in game time…)

Stark had been back to work at his precinct for two weeks, getting quickly bored by a desk job. His phone rang. A familiar elderly voice could be heard.

“I take it my handwritten manuscripts were destroyed at the Saint Agatha? No matter. Meet me tonight at nine. I will have something for you. You are worthy of it.”

It was just after 8.00 PM and an overcast sky darkened the dusk. Finishing up some paperwork, he started to leave for Chao’s restaurant.

“Stark!” his boss Greta Hack called him from her office. When he sat at her desk, she said, “Word is you’re bored with your desk job? I’m putting you back on the streets. Here’s your new case.”

Stark picked up the case file. Caldwell Broome, 50 year old antique dealer, had been missing from his office for a week. “You’ll meet your new partner, Alex Sim, a rookie tomorrow.”

“Listen, Stark,” Captain Hack muttered. “Everyone knows how you lost your last partner. Please make sure nothing happens to your new one.” 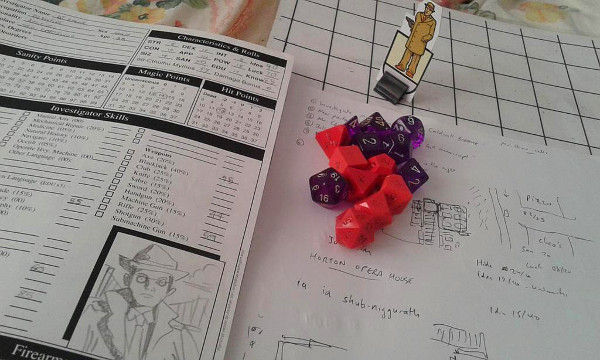 Stark’s Shenanigans Spills into the Streets of San Francisco

Stark pulled up across the street from Chao’s Chicken Rice, a three-story building with a brightly-lit restaurant at the first level. Rain was beginning to fall, soaking Stark as he crossed the street. (On a Spot Hidden roll of 83 out of 85%) Stark then thought he saw a shadow flit across above the rooftops – a winged shape, darker than the drenched sky behind it – and then disappeared.

The restaurant was a bustling with diners. A waitress asked, “Will you be dining alone?” He told her he was to meet Mr. Chao and she allowed him to pas. However, a 30 year old man stopped him and barked, “Why are you here? Are you here to put strange ideas into my father’s head again? You’re Detective Stark aren’t you. I suggest you leave quickly.”

(But on a successful LUC roll of 08/20) A clatter of dishes rang from a far corner of the dining area and Chao’s son hurried to loudly chastise the young waitress who had fallen. Stark slipped through the EMPLOYEES ONLY door unnoticed.

He climbed the stairs to the next level where he found a room with eight bunk beds and lockers. It might be where the employees lived. Rain streamed down the windows. There was a door at the far end, which opened suddenly and a young Chinese woman wearing a towel walked out of a bathroom. (Irfan attempted to Hide, but failed on a roll of 24/10.) She was still shrieking loudly when Stark quickly bolted out of the room in embarrassment. (Why Irfan didn’t Fast Talk his way out of there I don’t know. His Fast Talk is 54%.)

He took the stairs up the the next level where a 10 year old boy was standing still, barely illuminated by the light from above. Stark tried to talk to the boy but he did not speak a word at all. A closer look revealed that the boy’s eyes are wide open, looking straight ahead into infinity and he was slightly shivering. Stark tried to snap him out of it to no avail.

Stark left the boy where he stood and climbed to where Chao’s office was. He opened the door and a cold breeze swept over him. The window was open and rain was being blown in. Wind caused the single light bulb from the ceiling to sway. Books were on the floor, wet. Chairs and bookcases were overturned. There was a struggle and it seemed that someone had taken or abducted Mr. Chao out the window.

Stark quickly ran down, but Chao’s son and other employees were waiting for him at the landing of the next floor down. The young girl whom Stark had startled was screaming in Cantonese and pointing at him. Chao’s son said, “You should leave before I call your precinct and report you for harassment! Hey! What’s wrong with David? Did you do this to David?”

“No! He was like this when I found him,” Stark explained as a host of uncles and aunts mobbed the little boy.

“Get out of here now!” yelled Chao’s son. Stark found his hand being held onto by David. He tugged and David let him go, and left a scrap of paper hidden in Stark’s fist. Everyone was still fussing over the petrified boy when Stark left the building. In his car, he uncrumpled the paper which had handwritten Chinese text on it. (Upon an Idea roll of 17/40) Stark decided to go to his mother – Eleanor Stark, a professor of linguistics – at her university for help.

Stark found her mother still at her office. Eleanor – who was going through a pile of postgraduate papers on her desk – was unable to read Chinese, but her colleague John Sim who was three doors down the hallway could. Professor Sim greeted Stark warmly. When Stark explained his need, Professor Sim said, “Is this an official request by the police?”

“My rates for something like this is a hundred dollars a page.”

The young detective thought for a moment and agreed to it. The translation was completed fifteen minutes later.

The baffled professor had never heard of “chou beh nee gou ra” before. And neither has ever heard of the Horton Opera House. A quick check on the internet revealed that it was an abandoned 15 years ago and was located just outside Chinatown. He thanked Sim and left.

It was just after 10 PM when Stark arrived at the darkened, empty street where the opera house awaited him. Its façade was dark and run down. Its doors and windows were boarded up. He went to the alley at the back and used the axe he had in his car to open the back door. He strapped the axe to its custom strap, connected to his shoulder holster and removed his Glock 17. He moved slowly into the shadowy building, his flash-light illuminating his way. As he entered from the back, he explored old dusty dressing rooms filled with debris on the floor and paint peeling off its walls.

(At this point Irfan fell asleep for a couple of hours; most probably it was because he had not taken a nap since sahur before dawn. We continued hours later, after tarawih at the masjid.)

He found a staircase that leads to the utility section on the next floor, which yielded locked rooms, except for one that held a dozen old, mouldy and faded costumes. At the end of the hallway was a pair of smooth black doors. He pushed it and found himself in a room that was painted black from floor to ceiling. Unlike other rooms, there was no layer of dust anywhere in the room. His mind buzzed steadily, for some reason. He felt something unnatural about it.

He remembered the magic spell he learned from the now-destroyed translated Chao manuscript. Concentrating and clearing his mind (and sacrificing one point each of POW and SAN) supernatural senses flooded into his mind. He perceived that which were alive and breathing and warm with blood. There were three human-sized living beings in the next floor ahead!

He rushed out of the black room and into the room directly under where the living beings could be sensed. The room was also empty, though it was dust-laden and debris-filled. A window revealed that a harder rain was falling. Diffused glow from the headlights of a passing car revealed the outlines of an attic door in the ceiling (upon a Spot Hidden of 71/75). Stark pulled a box under the attic door and pulled on the handle. He tried to be stealthy, but (with a Sneak roll of 34/10) the door creaked louder than it should as it unfolded downward. 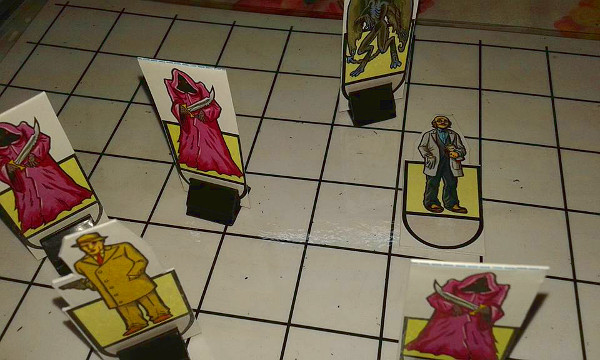 A cloaked and hooded man wielding a curved blade was waiting for Stark as he rose into the spacious attic. (Having higher DEX) Stark shot at his assailant, who stepped back and lunged again but missed. As Stark spun to regain his balance, he studied the attic: it spanned the entire width of the building and an entire wall was an open transparent window. Wind-swept rain soaked the floor three metres into the attic. Just short of the the rainfall rose an empty altar surrounded by candles. Two other cloaked men stood by it.

Their leader, presumably, ordered the other, “Help your brother. Do not let the Detective through!”

The other approached Stark attempting to flank him. He fired again at the his first attacker, but missed. Evading another swing of the blade, Stark twisted his way past the second attacker. But the second attacker’s lunge stabbed the left side of his midsection (6 Hit Points subtracted from 12) drawing blood.

At this point a shadow silently glided onto the open balcony and entered. It had black rubbery skin, a swishing barbed tail and curved horns on its head. It had no face. Stark was repulsed by the unholy sight, but he held his cool. (Sanity Roll succeeded!) The flying creature deposited what seems to be the unconscious form of Mister Chao on the altar!

He spun and fired the nearest armed attacked, but (upon rolling a 99% Firearms) his pistol jammed. He terribly wished he had not left his shotgun in the car. So, he grabbed and swung his axe which sliced a finger of one attacker, who screamed in pain. Meanwhile the leader was chanting at the top of his voice, “Iä! Iä! I call upon the Hunting Horror of the Night! I bequeath unto him the blood sacrifice of one of the Hallowed Brethren in exchange for absolute devotion to my word!”

Still bleeding profusely, Stark decided to run the blockade of his two attackers toward the attic door. As he passed them, another blade found its mark deep in Stark’s side (with another 5 Hit Points subtracted leaving only 1)! Stark saw a pale green light forming above the altar, dark smoke appear to form around it, writhing as if alive. Then Stark was through the hole in the attic floor and fell flat onto the debris-strewn floor below. There was a bright flash from above, and the entire opera house rocked violently for a brief moment. Stark kept pushing on, down the next floor, out the back door and into the rain where his car was parked.

(I had Irfan roll a CON x5, which he failed at 70 out of 50%) Stark was unable to maintain consciousness before he reached his car and his radio. He fell onto the pavement with a splash. Rain mixed with blood painted its long, swirling path into a sewer hole.

(Was this the end of Detective D.J. Stark, I wondered? There was nothing left to do but to get Irfan to make one final LUC roll. 11 out of 75%!)

Amorphous blur coalesced into a paramedic. Stark found himself struggling to stay awake in the back of a speeding ambulance.

“Don’t get up, sir,” said the paramedic. “You’re lucky someone found you and called 911 before you bled to death. We’re getting you to the hospital now.”

Stark had many questions, but they would have to wait as he slipped back into unconsciousness.