For several weeks, Irfan was asking me if I could run the continuation of his first Call of Cthulhu game where he roleplays SFPD Detective D.J. Stark. Finally I had the time to sit down and write prep notes for a short session. Irfan got into Detective Stark’s shoes, trench coat, shirt and tie, and then got right into it.

The game started out where the previous session ended: Captain Greta Hack gives the bruised and battered Stark a week’s off after he shot his turncoat partner Lee Wilson and rescued Paige Riordan from the vicious underground creatures. 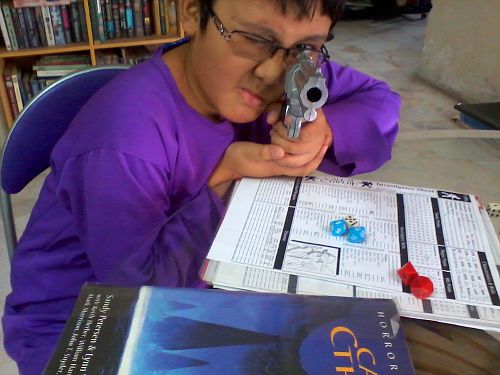 Stark really has a Glock 9mm, not a revolver

Stark really has a Glock 9mm, not a revolver

Returning to his apartment, he was ambushed by one of the foetid, muzzle-mouthed creatures in his kitchen. He felled it with a shot. The rest ran out the corridor and down the staircase. Stark pursued, but he was unsuccessful in tracking the beasts. When he returned to his apartment, the body of the creature he shot was gone.

Two patrolmen was dispatched, Officers Walton and Baines, who puzzled at the black blood that was drying on the carpet where the creature was shot. As Stark took samples of the blood, the cops circled the building and found a piece of paper in the bushes that was stained with the same black fluid, which read “2020 7th Avenue”. The policemen said they would investigate the address and suggested Stark get some rest.

In the middle of the night, he was startled by an appearance of an elderly Chinese man in his room who carried with him an ancient looking book. Identifying himself as Thomas Chao, he claimed that he tome he bore, The Book of Destinies was a family heirloom that was brought to San Francisco from Shanghai by his grandfather, and it held secrets that could help Stark fight evil. Before leaving, Mr. Chao wrote down his phone number should Stark needed his help.

The next morning, Stark was unsure what he would do. He went back to the beach where he rescued Paige. Another detective made fun of his claims of seeing monsters. The team sweeping the beach and the tunnels reported that they found no trace of the creatures nor of Wilson.

Returning home, he finds a patrol car parked in front of the building. Officers Smith and Jones had come by to ask Stark about Walton and Baines who were not answered their radio since the previous night. Stark told them that the other cops left his building last night to investigate a house on 7th Avenue. Smith and Jones drove off to the address.

Stark called up Mr. Chao to find out what he knew. Someone on the other end of the phone answered “Chao’s Chicken Rice” and forwarded the call to Thomas Chao. Chao informed him that the creatures that were ghouls. In the last 20 years, ghouls had been slowly flooding into the sewers under San Francisco and were tunneling to graveyards to consume the dead. Now their population had expanded tremendously. Mr. Chao had discovered that the ghouls had learned how to summon and bind a great evil entity, known as Sharakh-Kheth, the Scream of a Thousand Infants. Sharakh-Kheth’s crossing over into our reality will create a psychic backlash that would kill every living human in the city, and reanimate those had recently died. It would also be in the thrall of the ghoul who summoned it.

Stark thanked Mr. Chao and drove for 7th Avenue. As he approached the location, a police car appeared and smashed into Stark’s car. Although his vehicle was badly damaged, Stark was only lightly injured with glass cuts on his cheeks and chin. He found that the police car was empty, and there were no other car nor people as far as he could see on the street. Drawing his weapon, he approached 2020 7th Avenue.

Suddenly, a chill wind began to blow and dark clouds suddenly appeared in the sky, swirling in a spiral pattern. There was another abandoned police car in front of the building. Stark saw an opportunity to pick up a shotgun from it. He tried opening the building’s garage, but he found it welded shut. Running up the stoop, he kicked down the front door and there were Officers Smith and Jones in the living room recently dead from slashed jugulars. Stark took Jones’ radio and called dispatch, telling them officer down and backup was needed at 2020 7th Avenue.

Hearing a sound from the garage, Stark crept downstairs with his shotgun trained ahead. The garage was empty except for a massive hole that led downward underground, and a solitary ghoul standing guard over it. The ghoul saw Stark and pounced on him, but a shotgun blast ended him quick.

Then the house began to shake. Glasses started to shatter. A loud unholy chanting could be heard from the top floor. Stark bounded up the stairs ready for anything, and aware that backup would not get there soon enough. Upstairs, he discovered that four ghouls – including a mutated former detective Lee Wilson – had started the summoning.

The two missing policemen – Walton and Baines – and an unidentified woman lay dead positioned within a circle on the floor. Sounds of eldritch chanting from Wilson had caused the ceiling to glow in a bright blue light, and shaking the house to its foundation. Wilson noticed Stark and ordered two ghouls to attack him. They came for him trying to slash him with sharp claws and missing their marks. Evading the attacks also made Stark miss several times with his shotgun, although one lucky discharge sent a single ghoul flying to the floor.

Stark looked up and gazed upon a gigantic hand about to descent through the bright, blue mist in the ceiling. The hand – fingers, palm and wrist – was a horrific scene. It the size of a car and was shaped by dozens of corpses of infants, each appear to be stuck in a soundless scream. The hand of Sharakh-Kheth nearly sent Stark’s mind into an abyss of insanity. But somehow, he had the strength to point his shotgun at Wilson and pull the trigger.

Wilson’s head exploded and the ceiling seemed to scream. There was a blinding flash. Wilson’s body erupted in blue energy and was shredded to bits by some strange force. Large cracks began to form on the floor and the walls. The other ghouls wailed in agony as they bled through their eyes, nose and ears. Stark realised that was doing the same.

He staggered, descended the stairs and the world shattered around him. He fell and felt pain, and then remembered nothing else.

The next thing he knew he was being carried on a gurney by paramedics and an oxygen mask was on his face. He did not want to know what his face looked like. He was outside and there were police and rescue vehicles parked haphazardly on the street. Captain Hack appeared by his side and told him that the fire department pulled him out of the ruins of the house with lots of bruises, cuts and several broken bones. He had survived thanks to the stairwell.

Hack asked him what had happened. Stark gave it a thought and told her he was in the dark as well, but unknown hostiles in the house had killed four police officers when he arrived. Hack told him to get some rest at the hospital. Stark felt that although he had seen something unbelievable and nearly broke his mind, he knew that it was his hand that had halted it from appearing through the ceiling portal and killing. He took solace in this fact.

Before the paramedics closed the ambulance’s rear doors, Stark caught a glimpse of Mr. Chao standing in the shadows on the curb, holding his precious book, and smiling at him in genuine approval.

Can’t wait to play with him again.