The City By The Bay

I’ve had the Call of Cthulhu RPG for a decade now. I’ve never run it… til now. It was a gift from Gary before Irfan was born. We used to joke that if I couldn’t find anyone to run it for, I should someday run it for Irfan – who was then still unborn. And at the time I had yet to discover GOKL.

Almost ten years later, I have refereed Irfan in a Call of Cthulhu game, who rolled up his character yesterday: a young detective in San Francisco named D.J. Stark. 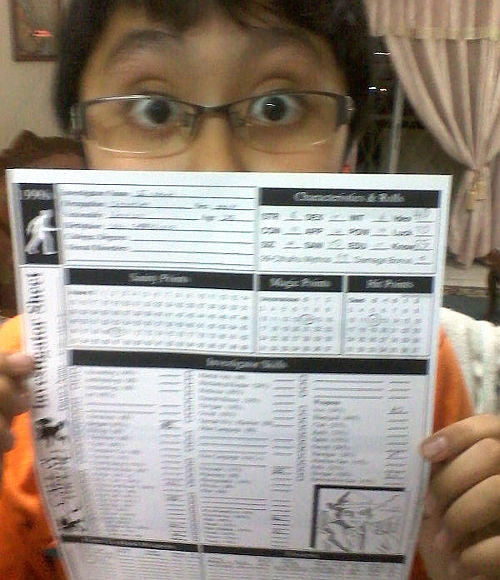 This 10 year-old appears to be too enthused with horror

Detective Stark and his new partner Wilson hear of an abducted 9-year-old named Paige Riordan and go for a look. Another detective prevents Stark from entering the crime scene, warning him that this was his case. Stark fails to fast talk his way through.

Stark and Wilson wait for the other cops to leave after nightfall, then they introduce themselves to Mr. and Mrs. Riordan. Because Stark has experience investigating other missing children in San Francisco who mysteriously disappear from their houses, they allow a quick check of Paige’s room. Stark spots some grains of sand under the missing girl’s bed.

Thanking the Riordans, Stark and Wilson return to their car. Stark hears a low growl from nearby bushes and investigate. He discovers an animal-like print in the grass. Wilson brushes it and insists that it is merely an animal’s pawprint. Stark does not believe it belongs to a dog.

Later, a lab technician who analysed the sand informs them that the sand has some crude oil stuck on it. Stark searches the internet and discover that five days ago, a passing oil tanker had a minor leak. It was promptly patched up, but some crude oil reached a small stretch of land at Ocean Beach.

Stark wants to go to Ocean Beach immediately, but Wilson argues that it’s late and he needs to go home. Stark dismisses Wilson and drives to Ocean Beach himself. He finds a strange hole in that leads under the highway along the beach. Because he has no flash-light, he drives to find a convenience store where a hold up was taking place. He manages to shoot the shotgun-armed robber.

Wilson arrives with other police officers and EMTs. After telling Wilson about the strange tunnel, Wilson reluctantly agrees to accompany him.

The cave is dark, wet and does not seem natural. They come to a fork and split up. Stark discovers a homeless man further down the tunnel in catatonic shock. After trying to talk to him for some time, the man — sobbing uncontrollably — tells him that something had appeared and grabbed his friend Mickey deeper into the tunnel.

Unable to persuade the man to follow him back out, Stark goes down the other fork to look for Wilson. He finds fresh blood on the ground. He swims across an underground river, and as he reaches the other side he sees a corpse float past him along the river. He presses on and comes to a large cavern. The middle of the cavern is a pile of corpses, some fresh and some not, most had been visibly eaten.

He spots a little girl in the pile of bodies who happens to still be alive. It’s Paige Riordan, who is in shock, covered in gore but otherwise physically unharmed.

Stark tries to get Paige out, but the way out is blocked by Wilson. He claims that he asked to be Stark’s partner because he knew Stark was looking for the missing children. He says that he cannot allow Stark to stop his brothers. His brothers must feed.

A gunfight ensues. Although Wilson clips Stark’s shoulder, Stark manages to shoot Wilson in the chest with his Glock. As Wilson drops, Paige screams. Beyond the pile of bodies, dozens of animal-like creatures, stalking on two feet, with a snout, sharp, blood-stained fangs and bloodshot eyes are filling the cavern from the far end of it. There is a sudden strong spoor of rotten meat. As they eye Stark, some of them were eating the corpses. Were these Wilson’s… brothers?

They lunge at Stark and the little girl but both manage to twist out of their way and flee. Unable to swim, Paige rides on Stark’s back as he swims across. But the water yanks him into an underground river. For what seems an eternity, they hold their breath before exploding out another tunnel into seawater and the cold, dark sky opens up above them. Stark pulls Paige ashore as dawn starts to break.

Later, other police arrive. Stark briefs them what happened and they return into the tunnels, armed to the teeth. But there was no sign of the creatures, the corpses, the homeless man nor Wilson. The tunnels were extensive and reached a mile or so inland. Some were found to bore up into the basement of residential houses. Was this how they abducted children from San Francisco?

Stark finds great joy in seeing Paige reunited with her parents in the morning sun.

But before the Riordans leave, Paige run to Stark. She gives him what looks like a dirty and stained brown cloth. After she leaves, Stark unfolds it to find Latin words and strange symbols woven into it. Did she discover this in the tunnels? What were those foul-smelling, flesh eating creatures? Where are the other children?

I suppose we’ll find out when Irfan plays Call of Cthulhu again whenever we can!

Thanks to Gary again for the quick scenario idea.