During semester break week, I was assigned to the team that would be teaching a class for a contingent from the Royal Malaysian Army.

For my “role play” segment of three hours, I decided to design a card game that doubles as a rudimentary roleplaying game (RPG). 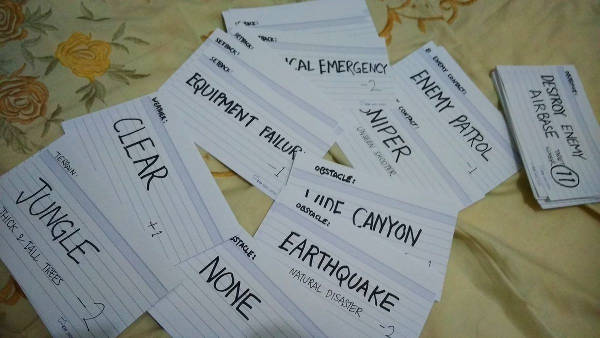 Two nights before, I spent up till 0200 hours designing the mechanics and physically producing the prototype cards by hand. There were 7 decks consisting of the Mission Objective deck, Insertion Method deck, Terrain deck, Weather deck, Obstacle deck, Setback deck and Enemy Contact deck.

The Mission Objective deck has a target number of between 9 to 11. Each of the other decks has a modifier number anywhere between -3 to +3 depending on the situation on the card.  To accomplish the mission on the Objective Deck the player has to roll a twenty-sided dice (d20) equalling or below the target number given. 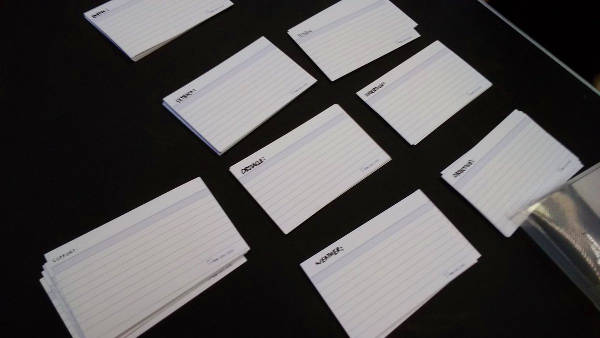 Now with the Support Deck

For a moment I thought all the designing was in vain because I was requested to stand down for other activities during my scheduled session. Fortunately, my session was reinstated on the afternoon before I was slotted to teach. 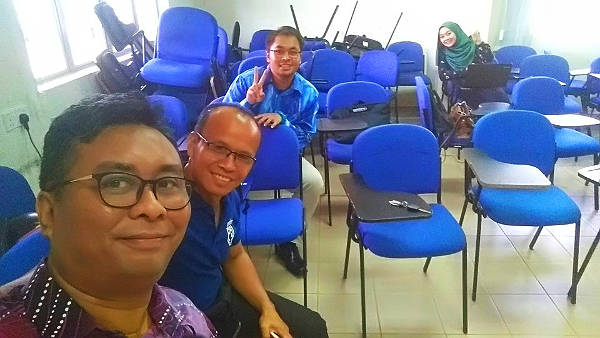 Teachers of the day

Before my class this morning, I created the Support deck where the participants could call for support which could possibly neutralise Obstacle and/or the Setback cards. My partner during the session was Mr. Nole Aclan. 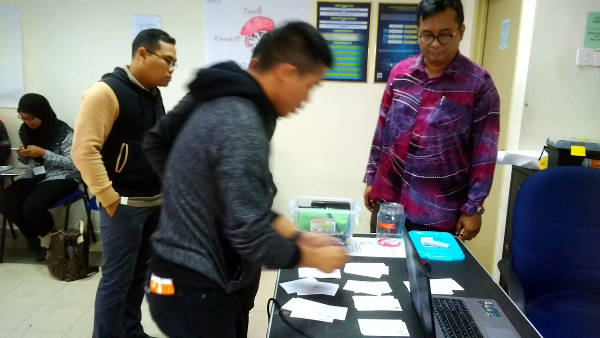 Randomly picking cards out of each deck

There were six teams in the class of 40+ students. In the beginning, each team had to pick one card out of all the decks except for the Support cards. 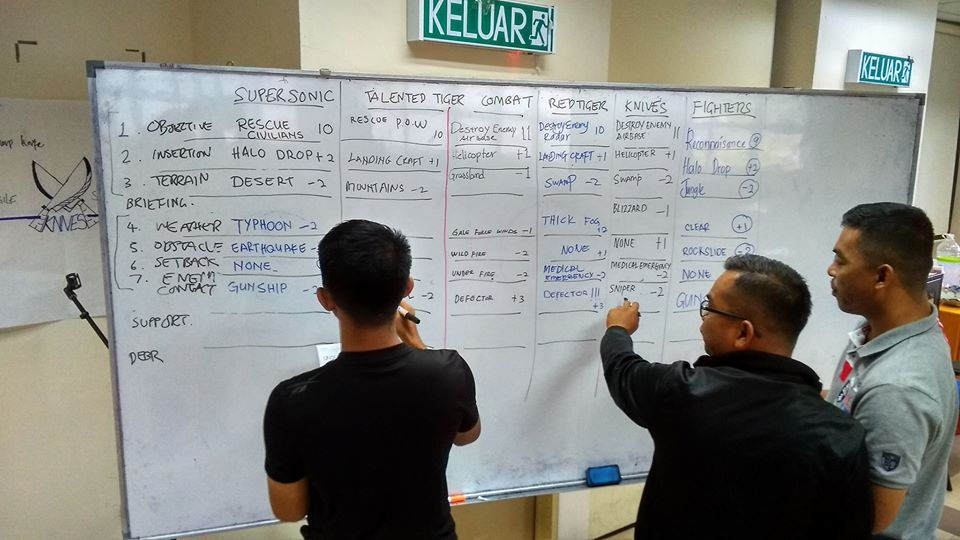 After picking out one card from each deck, each time had to write their card types and target numbers/modifiers on the whiteboard for ease of reference. 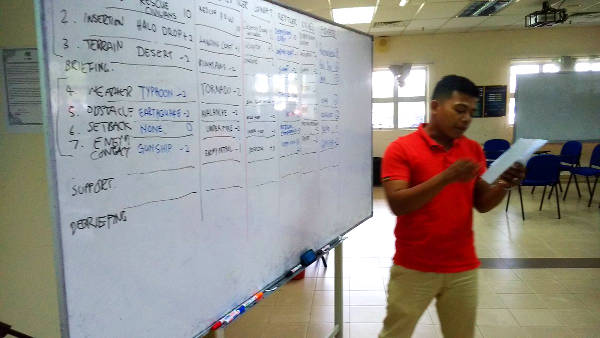 The “Commanding Officer” must give a briefing to his or her teams in English. The briefing is based on the first three cards: Mission Objective, Insertion Method and expected Terrain. This gave the participants the incentive to practise their English speaking skills. 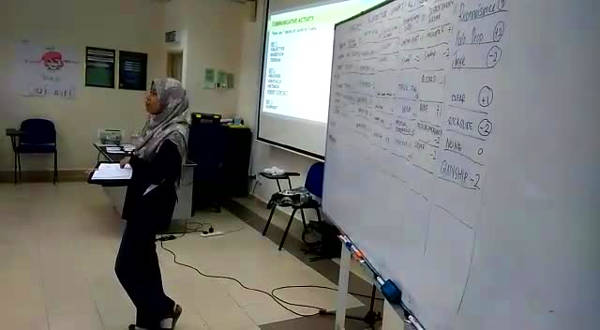 The Mission Briefings allowed the participants to roleplay to the hilt. When they pulled a HALO Drop Insertion card, the person giving the briefing explained what it meant and what equipment they had to use based on their own experience. Some of them also declared the time the mission would begin and how long it would take to reach there by air transport. 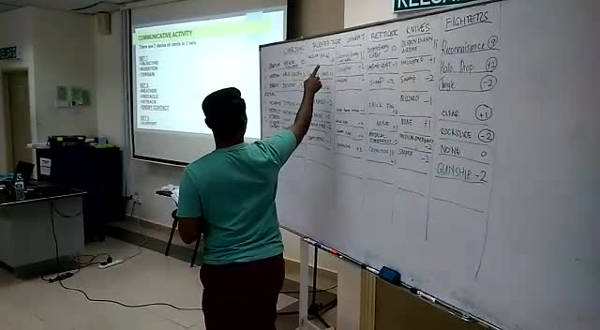 After every team has given their briefing, it was time for the “Squad Leaders” out in the field to give a Mission Report based on the Weather, Obstacle, Setback and Enemy Contact Cards that they drew. In this, many were giving their reports like a briefing instead of giving a boot-on-the-ground account of what they were encountering. (Two of the teams encountered ENEMY DEFECTOR cards which gave them a +3 bonus to their rolls.)

Then they drew the Support Cards (3 each – except for the last team because of insufficient Support Cards assets to support every team in the field) which could possibly neutralise any Obstacles, Setbacks or Enemy Contacts that they have. For example the MEDEVAC card could neutralise the MEDICAL EMERGENCY Setback. 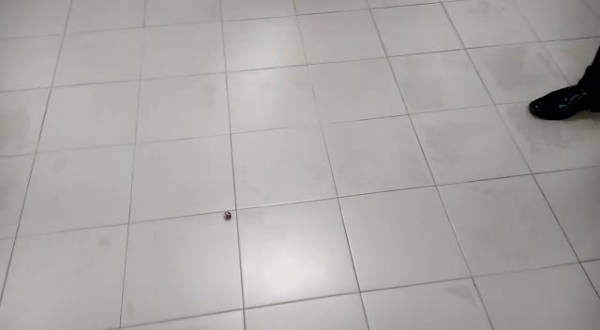 Below, you can see the FIGHTERS team neutralise all their problems because they drew the unique and overpowered CRITICAL INTEL Support Card.

After the Support Cards were played, a representative from each team rolled a d20. 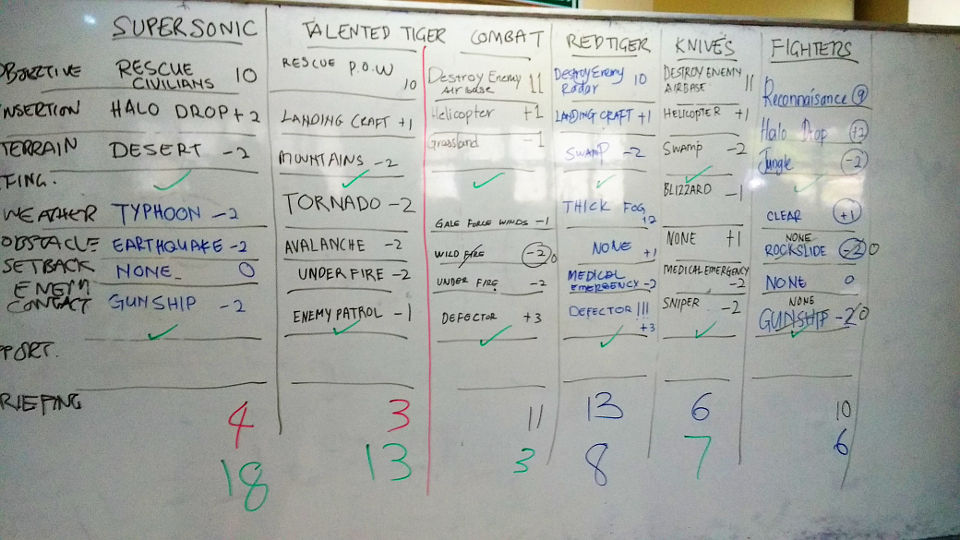 Here is the final results. Because the game succeeds by rolling low: if the bottom number exceeds the resultant Target Number just above it, then the mission is a failure.

Ultimately, we had three successful missions and three failed missions.

We had no time to run the Mission Debriefing roleplaying exercise. Perhaps next time. 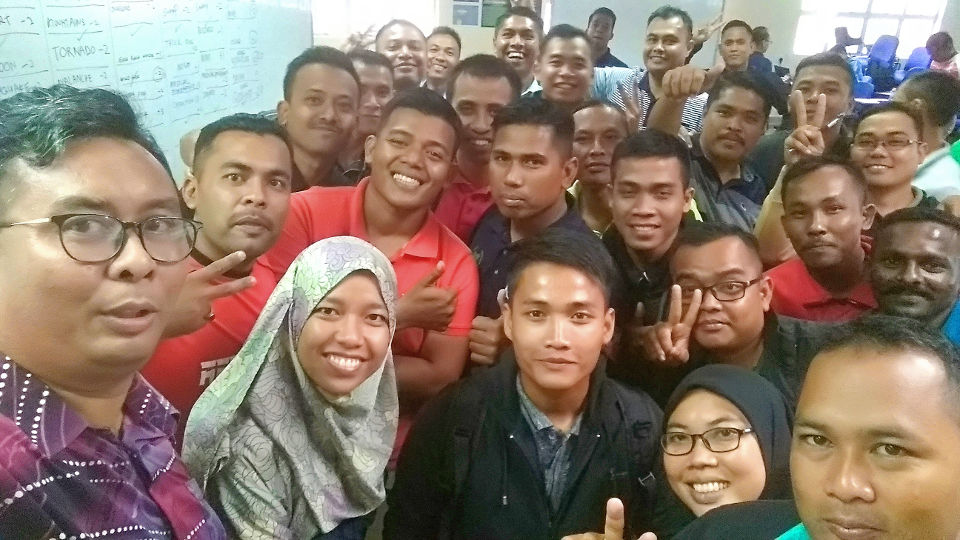