Dungeons and Dragons in Class

I ran Dungeons and Dragons for the first time… in a classroom. 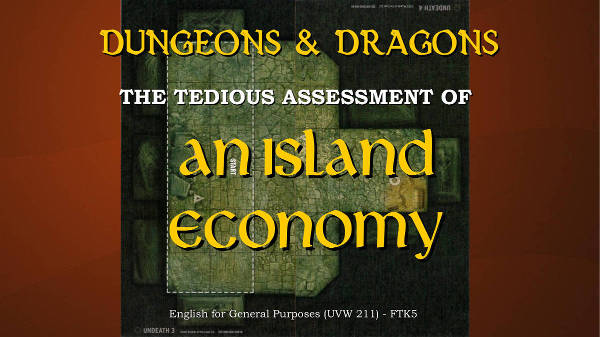 On Wednesday, I found that there was time to run a role-playing game session for the class while giving them a focused objective language wise. So I bought my D&D books. This class had never played any RPGs before, so I hoped that they could follow the instructions and the plot of the game as we developed it together.

I brought pregenerated characters. They selected what they wanted to play. I briefed them on Attributes, Skills, Hit Points and how the dice rolls are used. Soon, we were ready to play. 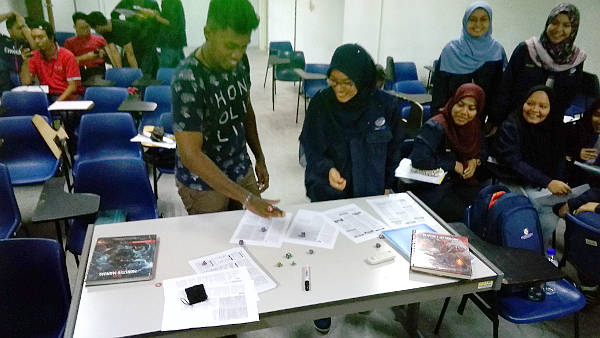 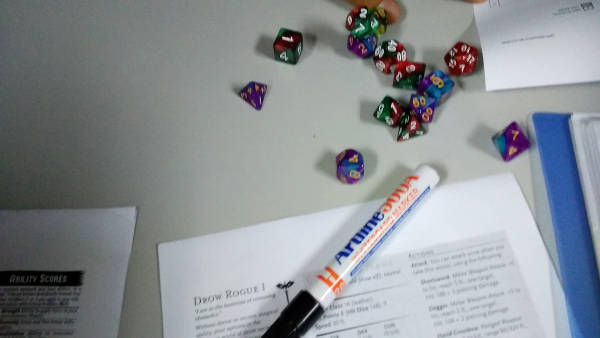 The six are officials of the Sultanate of Purnama Utara to assess the remote Gurindam Island for economic development. It’s a boring job but somebody’s got to do it.

The Bendahara of Purnama Utara is not optimistic. There is not a lot of natural resources on the island and surrounding rocks makes it difficult for ships to reach there, the prime minister believed. Nevertheless, the party is tasked with looking at agricultural, mining and trade potentials at the island. They would sail there and meet with a contact, an old local ranger named Wan Bayu.

The royal lancang that conveyed the party to Gurindam Island spent most of a day circumnavigating the island looking for an opening. The laksamana in command of the ship spotted a gap in the rocks where they could drop off the party’s sekoci launch. The six rowed the sekoci toward a very tight sandy beach surrounded by steep, rocky cliffs. Once they landed on the sand, the lancang sailed away. It would return in two days.

The group noted that it was almost nightfall, so they decided to spend the night at the beach. There was a single narrow path that led up to the thick jungle on the plateau above.

They had a beach party with food, drinks and singing. There was a bard in the group, after all. Soon it was dark and they slept. Gong Nekara took first watch. After a couple of hours, there was nothing. (He rolled a Perception check and succeeded.) The bunian elf heard a loud skittering in the trees above at the top of the cliff. He alerted the others, who drew their weapons sleepily. That was when the giant hairy spider charged at them down the path! 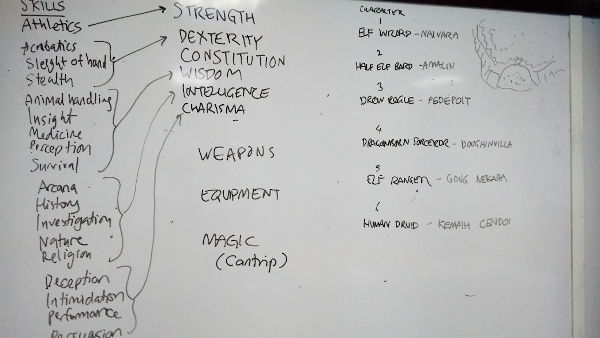 Never Shoot Into a Melee

The swiftest among them was Kemaih who threw his deadly javelin at the skittering spider. He missed. Because everyone was still sleepy (and the spider had higher initiative than most of the group) the huge arachnid jumped up and its fangs almost bit Gong Nekara.

Naivara drew on her magical abilities. Her hands began to flame on. He threw the ball of fire at the screeching spider. But the fire ball missed and struck a tree, setting it alight.

In the ensuing melee, Amalin jumped onto the spider’s back and tried to wrestle it to the ground. However it was considerably larger and heavier than Amalin so all she could do was to hang on for dear life.

Pedepoit pointed his hand crossbow at the spider and fired (and rolling a Critical Failure). The crossbow bolt struck Amalin in the butt cheek (taking 8 hit points damage).

The reptilian sorcerer Bougainvillea stepped forward and blew his a deadly cold breath on the spider actually freezing and dealing (3 points of) damage to it.

The spider spun and bit deep into Kemaih’s right forearm. (Thankfully there was no venom.)

Although badly injured, Amalin unslung her hand crossbow and send a bolt deep into the spider’s head. But it still moved with lethal ferocity (even with 3 hit points left).

Finally, Pedepoit the Drow who had sneaked up to the spider from its flank, attacked it with a shortsword and a dagger (gaining damage bonus from his Sneak Attack feature). The shortsword strike lopped off the creature’s head before the dagger swooped in slicing its abdomen.

Amalin let go of the dead spider and fell onto the sand. Also injured, Kemaih took out his healer’s kit and with his considerable (+5 Medicine) skills, both of them were fixed as good as new upon waking up the next morning. 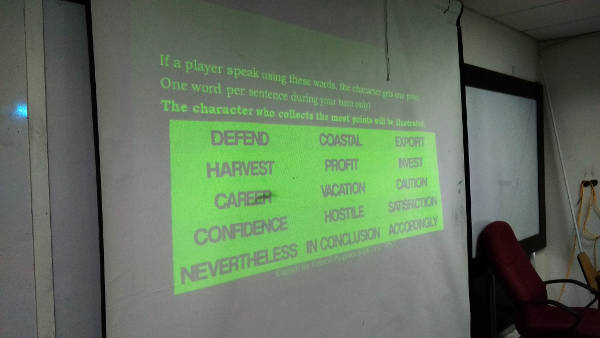 The projector is malfunctioning

Village of the Satay

Gong Nekara led the way up the path and through the thick tropical foliage, under a thick, shadowy canopy. No further incidents occurred. (This was because of his +5 Survival skill and +2 Proficiency bonus.) After three hours of travel, Gong directed the party to a small village located at the foot of a hill.

They could not help but swagger in with their fancy royal cloaks and Elven garments with intricately-designed weapons. The villagers, garbed in drab and dun clothes, regarded them with suspicion.

Soon, they stopped at a satay seller’s restaurant to ask questions. The seller was grilling his chicken satay outdoors. The group started being nice to the satay seller, buying some chicken satay from him. Upon letting the vendor know of their contact on the island, the vendor told them that Wan Bayu had been killed a few days earlier. 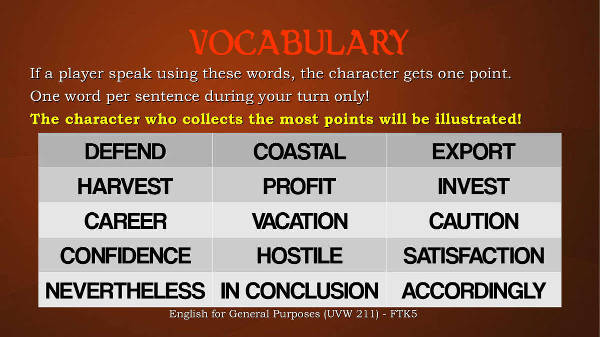 They also asked about the things the islanders here did. There were villages further up the hill that cultivated rice on hillside terraces. Rice was plentiful every season, plentiful enough for a surplus. There was enough for them to trade.

They should be going to inspect the rice terraces, but instead the group holed up in the satay vendor’s restaurant. Amalin started playing her lute but because she played badly, the other satay patrons told her to quit playing. Suddenly, Bougainvillea came to the rescue with his drums.

And everything clicked. The music attracted even more passers-by, turning them into patrons. The vendor was so happy with the extra business that after the music had stopped, he gave them group a full day’s worth of satay. 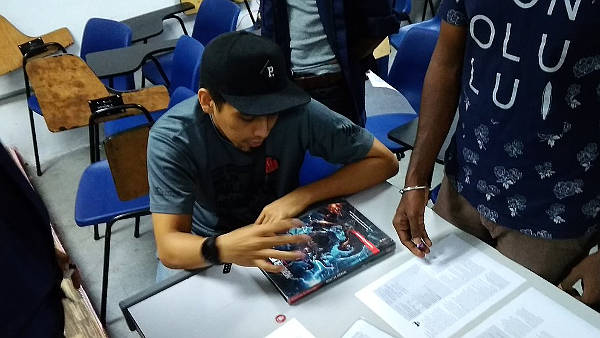 So that’s how the dice work

That night the company decided to split up. Amalin and Kemaih went to a nearby hospice and apothecary to get their wounds looked at. It required them being bedridden until morning.

Bougainvillea decided to go back out into the wild, away from the humans. Naivara went with him.

It was Gong Nekara and Pedepoit who thought they would investigate the strange nightly occurrences on the island. Both elves climbed further up the hill toward the other village.

Darkness fell quickly. As the ranger and the rogue were climbing over some boulders, they heard something approaching. They assumed battle ready positions with their weapons drawn.

They heard a voice from the trees around them, “I hear you have been looking for me?”

An elderly human strode out of the darkness, wearing old, worn out ranger gear. But something was wrong about this individual. He walked in a strange drunken-like gait. Upon closer view, his skin was pale and grey. His eyes were almost glowing green.

“Yes,” said the man. He drew his long keris from its sheath. Gong Nekara and Pedepoit being bunian elves were both able to clearly see in the dark. They noticed a glowing green tendril connected to the back of Wan Bayu’s head. The tendril uncoiled out into the dark jungle. Wan Bayu grinned and said, “Now you will die.”

Around them, more undead looking humans appeared in various states of decomposition. They wore old ragged clothes and held various types of bladed weapons. They each had the unearthly green tendril connected to the backs of their heads.

Surrounded among the boulders, Gong Nekara and Pedepoit prepared for battle.