01 Into the Dying Ship

Yesterday I played in a Coriolis RPG session online using voice comms and dice rolls via Discord and map display on Astral Tabletop. Ivan was the gamemaster. We played between 10 pm and midnight. Here is the story that was born from our first session.

We played the published adventure entitled Coriolis: The Dying Ship which is available at the Modiphius website.

According to the blurb: The ice hauler Orun II has stopped responding to hails, and has changed course towards a deadly asteroid cloud. The player characters are tasked with intercepting the heavy freighter to find out what has happened onboard and bring it back to Coriolis safely.

I play Alrazzi Kowalski a native of Coriolis station who is a crewmember of the courier ship the Prosperous Cheetah.

While hanging out on the space station Coriolis, the crew of the Prosperous Cheetah received a message on their tabula. A person by the name of Adzem Kembouri wished to engage the services of the ship for a mission. It seemed that they were referred to Kembouri by others.

As they were to meet at Wahib’s Cantina, Omar led the crew there early to case the joint. Alrazzi, a native of Coriolis, informed them that the eatery was well-known and should be safe for them. 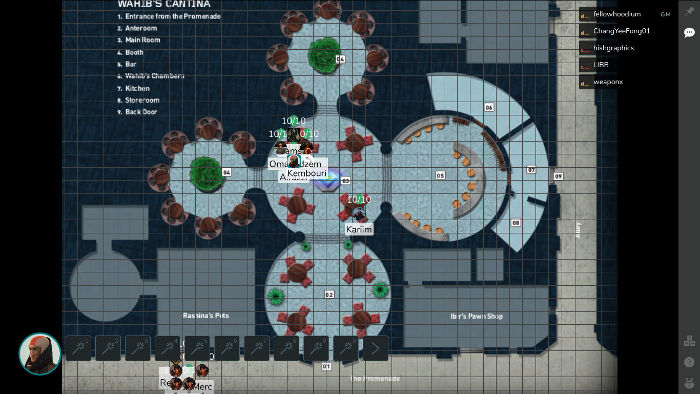 After an hour scoping out the perimeter of Wahib’s, they all walked through the cantina’s entrance. While Omar, Ramsis and Alrazzi occupied a table together, the heavy hitter Kariim sat at the bar alone.

Before long, Kembouri arrived. But before they could introduce themselves, a group of armed people accosted him at his table, led by a dark haired woman with her hair twisted in Dabaran fashion. Omar sneaked close and heard them attempting to coerce Kembouri into informing them of the location of a ship that was lost in space. Their leader introduced herself as Lieutenant Ariana Remora. Suddenly, the captain sashayed in and sat at Kembouri’s table as if they were old comrades, yelling greetings as if he was drunk on arrak.

The armed men, who wore a uniform of some sort, tried to intimidate Omar, but Omar bluffed them into thinking he had more people hidden in and around the cantina than he had. Ramsis and Alrazzi had moved into view from one direction and Kariim from another. Their appearance had the intended effect.

The uniformed group stood down and retreated out of Wahib’s.

As she left, Lieutenant Remora glared at Omar.

Kembouri greeted them and presented the mission to them. Kembouri’s employers, the shipping company Melem Gesurra, had lost contact with one of their ice hauler Orun II.  Kembouri needed a transport out to these coordinates, and a crew to retrieve the ship in case her own crew were incapacitated or worse. Also, Kembouri would be accompanying them on the mission.

The catch: The Orun II appeared to be drifting towards the Eye of Anuba, an astronomical body surrounded by a vast field of ice fragments, which would pulverise the ship into space dust. Additionally there was a message that Kembouri received from the ship before it went dark:

DJINNI ABOARD. CAPTAIN LOST. MULTIPLE CASUALTIES. DEADLY CARGO. CONTAGION. DO NOT ATTEMPT A RESCUE. WE ARE HEADING FOR DEATH. MAY THE ICONS BE MERCIFUL.

Djinns were known to the people of the Third Horizon as ethereal entities of psychic and mental energy that inhabit the Dark between the Stars. However, they were also able to manifest in the form of flesh and blood humans or animals. Travellers through the Dark feared meeting these entities as they can be lethal if they so wish it.

Immediately the crew agreed and would prepare to cast off as soon as possible, as they would be paid handsomely.

Soon after, as they were preparing to raise ship, Kembouri arrived with his huge luggage, which made the crew suspicious. Kariim suggested they check it, so Omar told Kembouri then had a policy to check cargo and luggage going aboard the Prosperous Cheetah because of a previous unfortunate event.

Kembouri allowed it as Omar and Ramsis checked it. They found nothing out of the ordinary in there, and cleared it to be brought aboard. 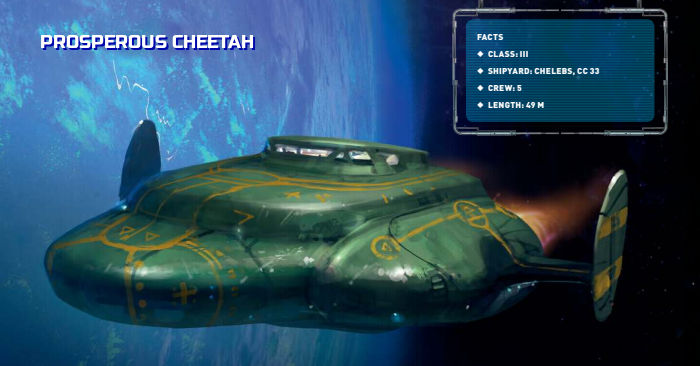 Alrazzi plotted a course and headed towards the Eye of Anuba. (I rolled 3 successes, gaining a critical success, allowing the Cheetah to find the Orun II several hours before the ice storm began in earnest. With Omar assisting my pilot roll, I had a pool of 8 dice!)

Spotting the ice hauler, Alrazzi held station a hundred metres off its port so they could assess the Orun II. The ship had no power and its engines were offline. There was not a single running light or turned on. The ship had a forward crew section, a long thin neck section fortified by pylons that also held huge fragments of ice, and the engine section in the back.

There were four airlocks the Cheetah could dock with: one of each side of the forward and engine sections. The crew decided to check out the bridge.

Upon docking, Alrazzi stayed at the pilot’s seat in case they have to retreat quickly. Omar led the rest of the crew and Kembouri to the airlock. The hatch was unpowered so Ramsis had to cycle the airlock manually before they could open and step through it. 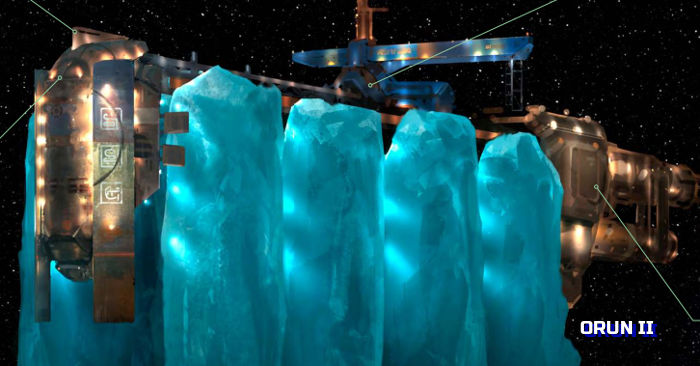 Darkness on the Bridge

The bridge was dead. There was no power and light anywhere except from the Cheetah crew’s own light and the ghostly blue glow of the Eye through the forward window.

Then, they found two motionless figures seated at their stations. One was the first officer Reyna Zarkavan who had a bullet hole through his forehead. The other was the captain himself Ardul Ratjun. Ratjun was alive, but his eyes were fully black, looking forward with no emotion.

When discussing what to do with Ratjun, Kembouri informed them that he was well-versed in exorcism methods.

They found a tabula that belonged to the engineer Kakiwene Rabolbour and scoured it for information. The engineer’s logs indicated that the captain was shaken by what he found during a routine cargo inspection. The crew had argued whether the captain had the matter under control. Chief engineer Atallah Ard told Kakiwene that the captain should not be playing with things he could not handle. After that all hell broke loose aboard the Orun II. There had been violence and people had died. And the captain was no longer recognisable.

It was uncertain if the others were still alive or have died.

They tried to interrogate the captain, but he suddenly attacked them, and Omar had to hold him down while Kariim bound him. Kariim returned the immobilised captain back to his chair, his eyes still onyx black. Was this the doing of the djinn? Was the djinn in Captain Ratjun? Could this be an efrite? 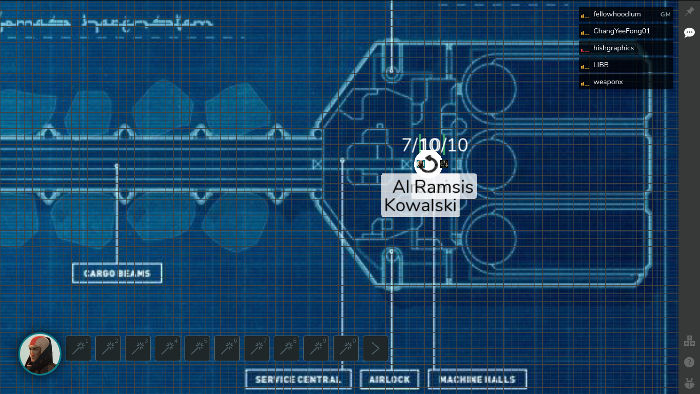 Deck plans of the ice hauler

Breaking Up is Easy To Do

After docking there, everyone marched back into the Orun II where they team split up. The broke into the locked machine halls where chief engineer Atallah was waiting in panic. The crew managed to calm him down and convinced him that rescue had arrived, but they nneded to restore power to the ship.

Omar led Kariim and Kembouri forward to look for survivors, and perhaps discover the location of the djinn loose aboard the ship. Ramsis attempted to power up the ship engines while Alrazzi covered him and Atallah with his accelerator pistol.

Omar’s team reached the middle of the long, thin section between the forward and engine sections. There was an elevator that led up to the workshop. But as they were trying to cut their way into the central office, they were attacked by an exo-loader. The exo-loader appeared to be remotely controlled from somewhere. The team defeated the exo-loader quickly (thanks to Kariim’s critical hit to the machine’s battery pack).

The question remained: Who was driving the exo-loader remotely?

They found Kolb Zir the stevedore akbar of Orun II locked in the central office. They tried to coax  information out of him, but he was too stricken with fear to speak or move. Did the djinn do something to him? Omar had to leave him behind.

Back in the machine halls, Ramsis, Atallah and Alrazzi were faced by two assailants who popped out of the shadows. These men wore red costumes and wielded swords. They were not djinns as far as Ramsis and Alrazzi could tell.

It was then that a newcomer wearing an Orun II crew uniform appeared from nowhere to help the crew fight the swordsmen. Despite having guns against swordsmen, Alrazzi was sliced at the side of the neck and was wounded (by 4 hit points), though not gravely. Ramsis shot one of them twice but Atallah finished him off. However, they assailants also injured Ramsis (by 3 hit points) in a slashing attack.

But before long, the attackers were on the floor motionless in their own pools of blood.

The newcomer introduced herself as deckhand Ayda Leon. Leon had been hiding in the air ducts, trying to survive the Orun II catastrophe. 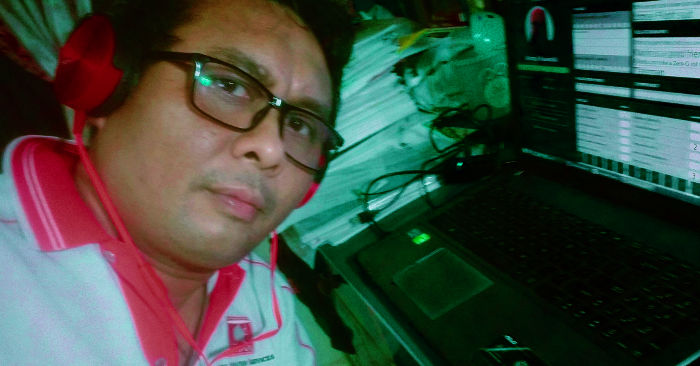 After the fight was over, Leon, Atallah and Alrazzi stood guard while Ramsis continued to power up the ship’s engines. Before long, the engines began to spool up, but they could only restory primary power to the entire ship from the ship operations console on the bridge.

Alrazzi was wondering if the Orun II sensors were only detecting the Cheetah, but apparently the signal was approaching them at speed. It was another ship.

Omar, Kariim and Kembouri ran into the machine hall to rendezvous with Ramsis, Alrazzi, Atallah and Leon. The Orun II was their rightful salvage. It was time to fight.