Today at work I ran Cthulhu Hack for the first time. I have the rulebook with me for some time now and had not tinkered with it last weekend. Then, Irfan and I went through character generation and the dice basics, just to get the hang of it.

Later I read several of Michael LaBossiere’s online scenarios, after which I decided to adapt “Woodson Pond”.

Here is the story from the game I ran for my colleague Robert who like me also teaches English. 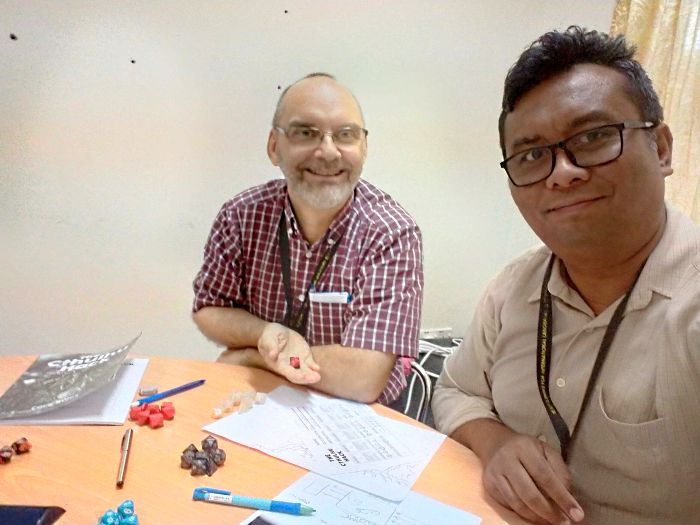 It was on a Friday during one of his lull weeks when Sean Columbo received the letter. The Seattle-based private eye discovered that the letter was from his former high school classmate Margaret Hilton, a real estate broker in Tallahassee, Florida. Margaret had was set on acquiring and selling a land to a developer as there was a huge demand of housing for college students. However, the land, it seemed, was supposedly haunted.

If Sean obliged Margaret request to debunk the obvious balderdash, Sean would be entitled to a percentage of the sale of the land. Since, Sean was between cases, he decided to head there. 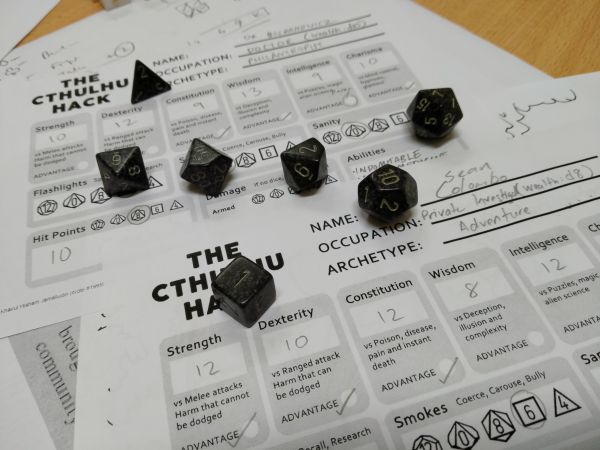 Monday morning, Sean arrived at Tallahassee airport where his former colleague Dr. “Bog” Bogdanowicz, a physician who had experience in parapsychology, waited for him. Dr. Bog warned him that she was not into proving the existence of the supernatural. Sean assured her that her skills in debunking strange phenomenons would be more than welcome for this job.

Sean and Dr. Bog took a cab to Margaret’s apartment building, but there was no answer at the door. Upon canvassing the building, Sean discovered two pieces of information from two different neighbours. Firstly, an elderly lady told them that Margaret never came home on Saturday. Secondly, a 70 year old man who said, “Oh! Like the show on TV!” when Sean introduced himself, thought that Margaret would be at Gulf Winds Realty, her office.

A short cab ride later, Sean and Dr. Bog introduced themselves to Mr. Vasquez, Margaret’s manager, who also had not heard from her for two days. He had been trying to call her over the weekend. When Sean gave him his “private investigator” name card, Vasquez gave them permission to look over Margaret’s desk.

After some digging, the duo came across a file folder of the property Margaret had mentioned in her letter: The Woodson Estate. The property had been abandoned for decades. They discovered a news article which mentioned that the Woodson house itself had been tragically burned down in 1945. The fire caused the death of family matron Evelyn Woodson and both her sons David and John who at the time had returned home from the war. David was attached to an armoured division in Eastern Europe while his older brother John was a naval aviator.

Also, they found a hand drawn map of the Woodson Estate in the folder. Sean’s attention was immediately drawn to the words SATURDAY 7PM written at the bottom of the map. 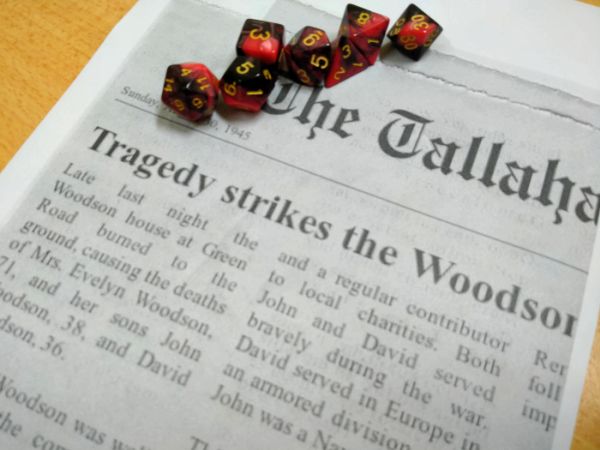 A third taxi ride brought them miles out of town towards the swamps. The greenery grew thicker as they approached the Woodson estate. The taxi stopped in front of a rusting ornate gate, through which Sean and Dr. Bog saw thick, uncontrolled undergrowth between tall cypress, mahogany and buttonwood trees. Everything through the gate was dark and in shadow.

A quick look at the bus stop along the road was unproductive. The bus stop appeared to not have been in use for many years, perhaps decades. They strolled back to the gate where they found it locked by what seemed to be clean, shiny chain and a clean, shiny padlock. Sean found this somewhat peculiar.

The duo then walked the perimeter, through the thick vegetation towards the spot marked BREAK IN THE FENCE. However, they found that the break did not exist, not any more. The fence had been freshly fixed.

Dr. Bog figured she could nevertheless climb over the fence and began at it. As she ascended the 3 metre tall fence, there was a sound that came from the under-brush behind them. Sean spun and immediately caught sight of a large, mean-looking bear which seemed to be made of all muscle and fur. Scarring all over its body and head indicated that it was… that kind of bear.

Without any sign, the bear suddenly charged at them (which would take two rounds before it reached Sean). Sean drew his automatic pistol and fired. He fired twice and twice the bullets appeared to take no effect despite drawing blood.

That was when Dr. Bog jumped down from the top of the fence, her elbow striking down upon the bear’s head. Thankfully there were no animal rights group anywhere because the move motionless. Dr. Bog was aghast she did what she did. Sean did not wait to see if the bear would wake up. They both quickly climbed over and went forth into the grounds of Woodson estate. 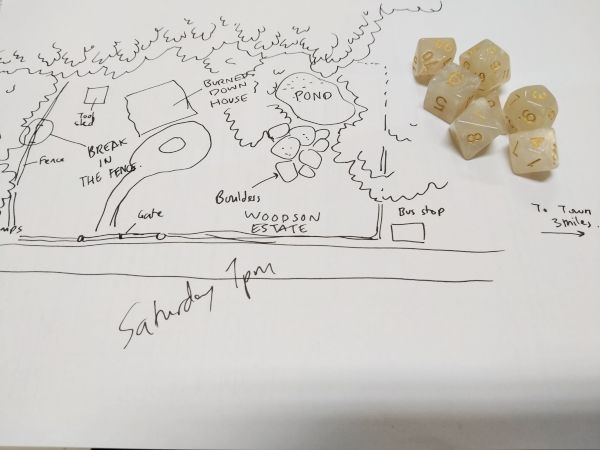 The duo carefully sneaked up to the husk of the old Woodson house. The house itself could be identified by a part of a ground floor wall that was still standing… barely. A fireplace still stood on the wall. It was once indoors, now it faced them outdoors. Vines wound their way across the debris of the old house.

They approached the fireplace and found half a wooden bureau still standing beside it. Most of the documents in its drawers had been damaged over the years by rain and wildlife. However, they discovered two very old, extremely brittle photographs of a young man and a woman, respectively. Sean turned the photographs over and read the names written there: “JIM TALBOT, GARDENER” and “SUSAN BERNARDIN, HOUSEKEEPER”.

Slipping the images into his pocket, they then made their way to the pond. However, the pond was surrounded by dense foliage and treacherous pile of boulders that was at least 4 metres high. Sean decided not to proceed and turned towards the tool shed.

Inside the tool shed were old gardening tools, unusable as they had been ravaged by corrosion. But there was something there that was the epitome of cognitive dissonance. There was a shiny, fresh-looking tool box on a bench.

Sean concluded that people still visited the estate for some reason as he broke open the tool box. He grabbed the heavy duty flashlight there and pocketed it.

Then, they walked towards the front gates. Eventually they discovered that they were not alone any more. The law was waiting for them just outside the gates.

The sheriff introduced himself as Gillespie but he did not introduce his deputies. He spoke with hostility, asking what they were doing on private property. After Sean informed them of his quest, Gillespie told them to stop what they were doing and leave town as soon as possible. On his gesture, a deputy stepped forward with a key to the shiny new padlock.

The lawmen, who were armed with either a shotgun or a revolver, surrounded them as Gillespie told them to leave first thing in the morning. He ordered a pair of deputies to escort them to a hotel back in town. 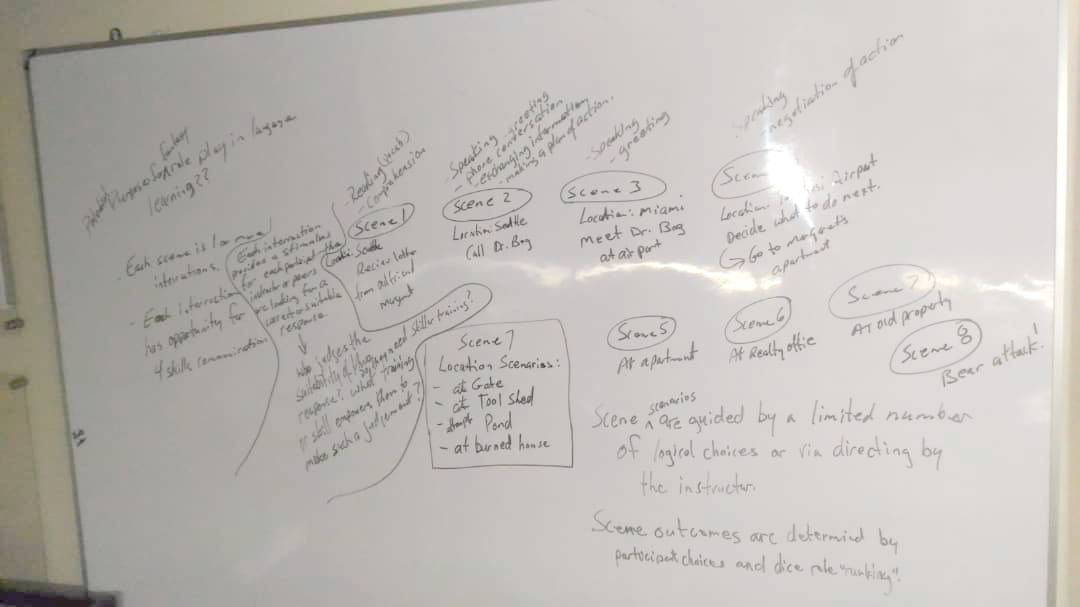 Sean complied pleasantly, entering the back of the sheriff’s vehicle. He looked back at Gillespie and his remaining deputies as the car began to drive away.

It was almost dark when the deputies deposited them in front of a five story hotel with the neon lights HELTON HOTEL flashing above its entrance. After the deputies left, Dr. Bog booked two single rooms, one of each of them. They both had noted that the sheriff, curiously, had keys to the padlock on the Woodson gate.

Why would this be?

That night, Sean Columbo relaxed in a warm bath to relax himself, unsure what tomorrow would bring… or if he would ever find Margaret.