Once upon a time at a time forgotten by lore, there was a city known as Big Dark Mountain. It was once a great mountain which had been hewn into a plateau. Humans, elves, dwarves and dragonborn came to build a city upon the plateau. Even a number of drow eventually settled there. Over the centuries, it grew into a prosperous city state. It was the centre of culture and commerce for the land.

Meanwhile, evil powers began to dominate the countryside, corrupting a community here and despoiling a village there. Adventurers, warriors and explorers emerged from Big Dark Mountain, banding into groups of protectors. These groups venture forth across the land to seek out evil and darkness. One such party was the group known as the Pretty Werewolves… 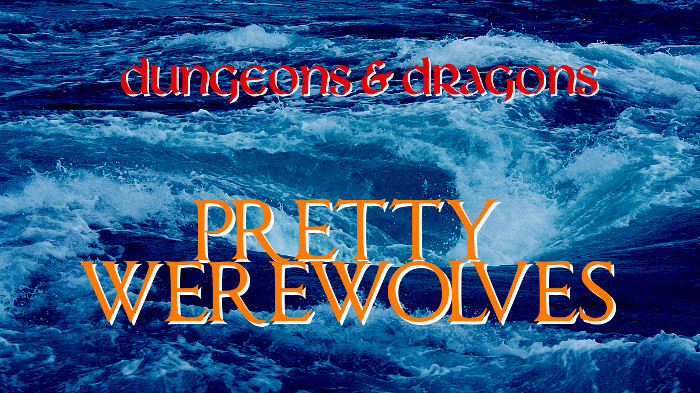 The ten members of the Pretty Werewolves had been tasked by the High Prince of Big Dark Mountain to investigate strange going ons at the coastline, especially near Baby Shark Village. The village was near Todak Beach.

As the adventurers marched east through the Ladies-First Forest, Slendervalve the elf ranger (succeeding in her Passive Perception roll) noticed that they were being stalked. There is a shadow here, a glint of steel there, through the leaves of the trees.

She alerted the others. The Pretty Werewolves formed a circle with the human paladin named Dev in the middle.

Then the attack came. 8 people wearing bedraggled clothes and unkempt hair ran at them from different directions. Each of them waved a shortsword haphazardly as they ran.

Hago moved first. He flung a dart at an approaching bandit and skinned his shoulder. Slendervalve nocked an arrow and loosed it. Her arrow struck the forehead of another bandit. He stopped running and staggered around bewildered at arrow on his forehead. Ragnarok was a heavily built barbarian. He easily swung his greatsword and sliced the nearest bandit in two.

The lead bandit, an older woman, yelled, “Stop! Why are you killing us?”

The other bandits ceased their attack and went to retrieve their wounded and dead. The Pretty Werewolves lowered their weapons. They realised that their attackers were all weak, poor people who lived in the Ladies-First Forest. The leader kept on whining as they disappeared into the woods, “All we wanted to do was to steal their things! Why did they have to kill us?”

Soon the Ladies-First Forest Bandits were all gone. 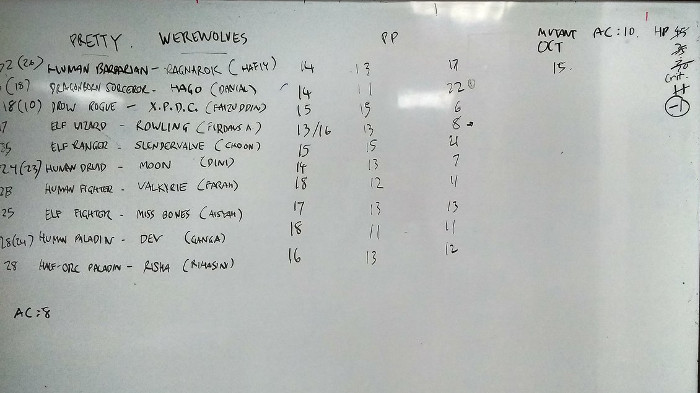 The roster plus Armour Class and Passive Perceptions score

Terror Over the River

Several hours later walking through the Ladies-First Forest, Slendervalve (through a successful Survival check) came across a tree trunk that fell across a river. The river had black waters and flowed viciously from the south.

The ladies decided to cross first. (I rolled a 1d8 and ruled that an encounter would happen on a 7 or 8.) Everyone managed to cross safely until Ragnarok was halfway across the fallen tree. (The 1d8 came up 7.)

Suddenly, a huge octopus with tentacles, a deadly beak and half a dozen eyes – obviously corrupted by some sort of dark magic –  burst out of the water. Its tentacles reached for Ragnarok, who dodged them all expertly. Ragnarok was bulky, but he appeared to also be fast.

During the battle, Ragnarok struck and split the jaw of the corrupted octopus. Teeth flew out. The team also helped too. Slendervalve shot an arrow into one of its eyes.

In the end it was Risha the half-orc paladin who rushed onto the bridge with her maul. Nimbly balanced on the tree trunk, she smashed down with her weapon, crushing the octopus’ huge head. It exploded into a hundred slimy pieces.

The octopus slid lifelessly back into the river which then carried it away.

Nightfall at the Cliff

When the sun had dipped below the horizon and the stars began to show, the Pretty Werewolves arrived at a fifty-foot drop. Todak Beach lay a mile or so before them. As no one had a torch nor a rope on them, they all had to climb down the cliff in the dark and without any climbing gear. (I ruled that those without darkvision had to roll their Dexterity save with a Disadvantage.)

The elves reached the bottom of the cliff easily – except for the drow X.P.D.C. (which was a mistake on my part as I forgot drows have darkvision.)

Besides Risha and Valkyrie the human fighter, everyone else fell down and hurt themselves one way or another. 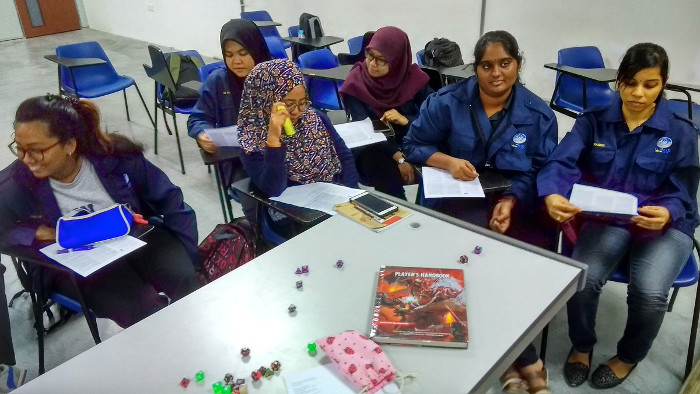 One half of the class

Their arrival at Baby Shark was not met with hostility or any sort of negativity. The villagers, whose main economic activity was fishing, welcomed the Pretty Werewolves. That night they were holding a festival that celebrated their bounty from the sea. The village elder grinned and told them, “This is a tribute to the Todak God of the Sea!”

Wearing clothes mostly light brown, ochres and pale oranges, the villagers sat around a huge bonfire in the centre of their village. They offered the team their fish soup which everyone was having for the Todak Festival.

Only the fighters Miss Bones and Valkyrie did not consume a drop of the soup.

The elder put on a headgear made from the head of a swordfish. The dead fish’s long upper jaw pointed upwards to the sky. He yelled, “It is time to a sacrifice to the Todak God!”

Only then did the party realise that the ones who ate the broth offered by the villagers had been paralysed. They were drugged!

“TAKE THEM!” the elder shouted. The villagers turned to capture Miss Bones and Valkyrie, but both of them fled. Valkyrie huffed and puffed all the way back to the cliff. Miss Bones, however, turned back alone and spied on the village from the tree-line. 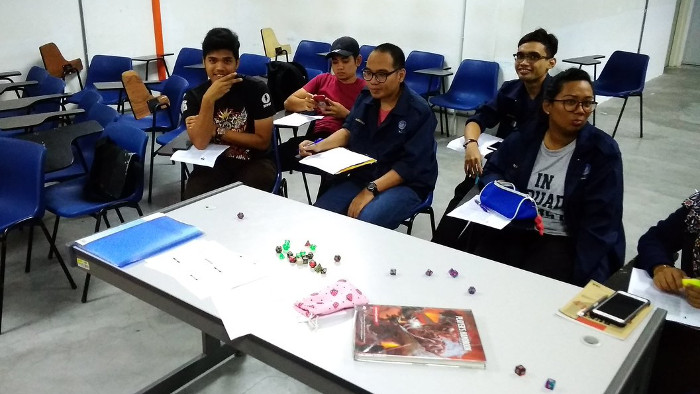 Miss Bones, silent and stealthy, observed the villagers drag the eight paralysed members of the Pretty Werewolves to the beach.

The villager cultists each, all armed with all manner of slashing and bludgeoning weapons, brought them to a wooden platform with an arm built to pivot horizontally. The elder chose the strongest looking among their prisoners to be bound and hung upside-down from the arm, namely Ragnarok, Hago and X.P.D.C.

Then the cultist controlling the arm swung it so all three inverted detainees were hovering above a whirlpool in the waters between some ominous looking rocks. The waters seem very deep to Miss Bones.

“We call upon Todak the sea god to feast upon our sacrifice!” the elder yelled into the night over the roaring whirlpool. That was when something came up from behind Miss Bones and gave the fighter a scare!

It was Valkyrie, who had returned to help her rescue their team-mates.

They considered attacking, but then Miss Bones decided on casting fire bolt on the village huts. Flames lanced out to the cultists’ houses lowering their real estate values. The inferno caught the attention of the cultists, causing the elder to lead everyone back to the village. They ran to save their valued fishing collectibles and soup ingredients.

Two guards were left to look over the paralysed prisoners who had started to vocalise incomprehensible gibberish as they had not control yet of their mouth muscles. 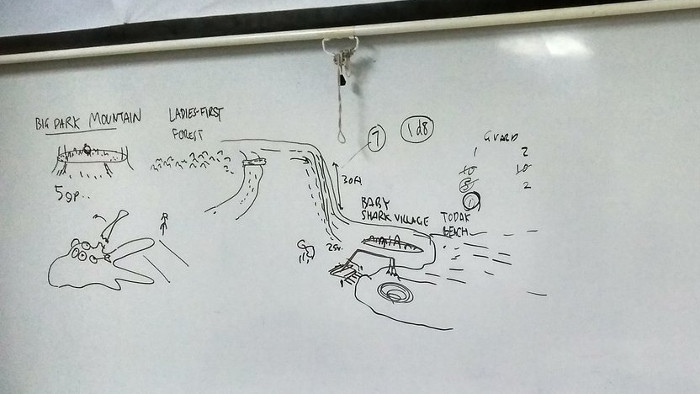 Wrath of the Todak God

As the guards had no real battle experience, Miss Bones silently strode up to the back of one and cast another fire bolt. The man caught fire and took a while to realise that he was actually dying. He turned to his friend and said, “I think I’m on fire.”

But his companion had already been skewered by Valkyrie’s shiny javelin. Their cries were at first unheard by the villagers, but then their high-pitched screaming caught their attention. An entire host of raging cultists were charging back towards them.

Valkyrie cut the bonds of the rest of the team. Everyone was beginning to be able to move and speak again. Ragnarok yelled, “Get us down! Something’s coming up from the whirlpool!”

Moon the druid thought she would cast thorn whip to snag the wooden arm and swing it back over dry land. Unfortunately (upon a Critical Failure) the magical vine of thorns she conjured whipped around the vertical pole behind her instead.

Seeing that the horde of cultists were halfway across the beach, Miss Bones and Valkyrie heaved on the rope connected to the end of the wooden arm. The arm swung inland with the Ragnarok, Hago and X.P.D.C. suspended and swinging below it like three sacks of potatoes for sale at the farmer’s market near the south gate of Big Dark Mountain.

That was when an gigantic swordfish exploded out of the whirlpool spiralling beneath where they had been suspended. Its eyes were red and unholy. Its teeth were jagged and monstrous. Hago, who had regain control over his faculties and muscles, opened his reptilian mouth. A blue bolt of destruction flared out of it. The bolt stuck the giant swordfish just above its right eye and if fell back into the waters with a furious roar.

The party formed a skirmish line and prepared for a fight. But the odds were 5-to-1 against them.

Everyone ran away from the cultists… except for Hago and X.P.D.C. who stood their ground. The others reached the tree-line, turned around and saw the two raising their arms and surrendering to the villagers who were trying to kill them.

“What are those two doing?!”

The Slaughter Before Dawn

Hago smiled his cold reptilian smile and told the horde of cultists, “Please. We would like to join you.”

The elder adjusted his swordfish hat and said, “Why would you want to join us after we tried to sacrifice you?”

“We have seen your glorious ways and we would like to join your people! All hail Todak!” Hago’s words came out sincere and believable (thanks to his Charisma bonus of +3).

“With powerful warriors and sorcerers at our side, we will have even more sacrifices! Let us celebrate!”

They celebrated again. There was another bonfire. There were more fish soup though this batch did not paralyse Hago and X.P.D.C. The celebrations, the elder told them, were not as lavish as the previous one as they had already spent their celebratory budget on that event.

“It’s okay,” Hago assured them. “As long as we are part of your tribe!” 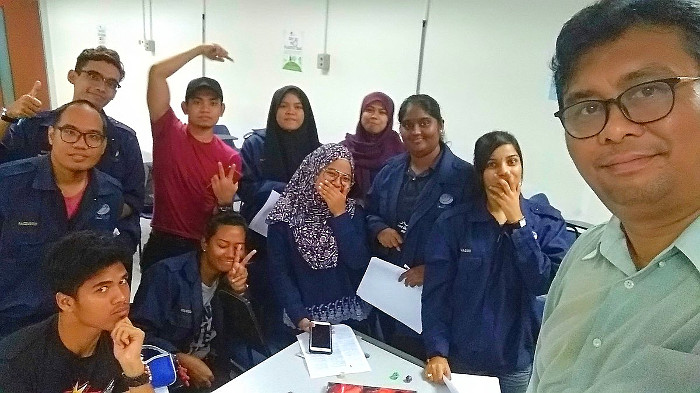 Another hour before the sun came up all fifty exhausted cultists fell soundly asleep. Only Hago and X.P.D.C. did not sleep. They walked the village looking at everyone who were asleep.

(Here I ruled that no attack roll will be made by X.P.D.C. because his opponents were asleep, not to mention his Sneak Attack feature which would give a extra 2d6 damage. The drow had only to succeed his +7 Stealth skill checks. Each round he was successful in his Stealth check he would automatically slay 10 of the cultists. The Difficulty class counted down from 12, 11, 10, 9 and 9 for their respective rounds. So he rolled each round. He succeeded each round.)

From afar, the Pretty Werewolves were observing at what their two compatriots were up to. Hago spoke to X.P.D.C. Then X.P.D.C. drew his shortsword and started going from hut to hut. Every time he left a hut he was more and more covered with blood. Blood stained his studded leather armour, his dark blue skin and even his silky white hair.

Soon, he had finished his job and cleaned his sword. Hago called out to the others, “Job’s over. Let’s go get paid.”

The reunited team headed back to Big Dark Mountain to claim their reward from the High Prince for eliminating the cultists, although the others started to be afraid of X.P.D.C. after how he calmly slaughtered an entire village in their sleep.