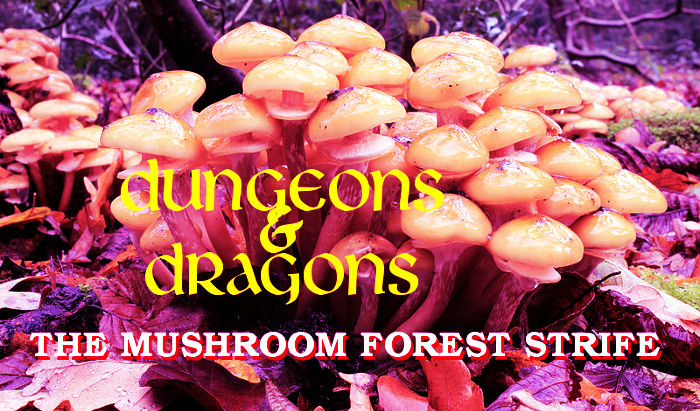 In a land ravaged by magic and monsters and forgotten by time, a pair of adventurers: a human barbarian named Jonz and an elf ranger named Maya travel the wilderness. While the barbarian is keeping an eye out for gold and treasure, the ranger is keeping close in order to quickly pull her clumsy barbarian friend out of trouble at a moment’s notice…

Chapter 1 – Thankfully No One Has Arachnophobia

Dozens of types of mushrooms stood in the way of Jonz and Maya. There were small lichens, knee-high toadstools and hundred-foot tall mushrooms, surrounding them as they walked through the ancient Mushroom Forest.

A river blocked their path and they spotted a body on the ground across the river, about forty feet away. 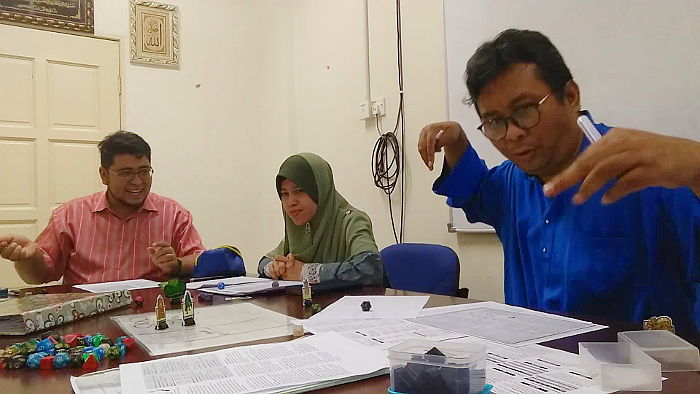 (Failing a Wisdom check) Jonz was unable to determine what dangers lay beneath the river’s murky and fast-moving waters. How deep was it? Where there sharp rocks hidden in the river bed?

“There must be some gold over there,” he said pointing at the body. “Help me, Maya. Are you carrying a rope?”

The usually stoic Maya produced a cold of elven rope from her pack, long enough to reach the other side of the river.

“We could try to throw the rope over the river,” Jonz said. He tied one end of the rope to a rock and threw it across the river. Maya tossed the rope towards the exact location where it held firmly against some jagged rocks and twisted roots. (Maya succeeded her Insight check, giving her an Advantage to her Athletics check. She then rolled a natural 20 for Athletics.) 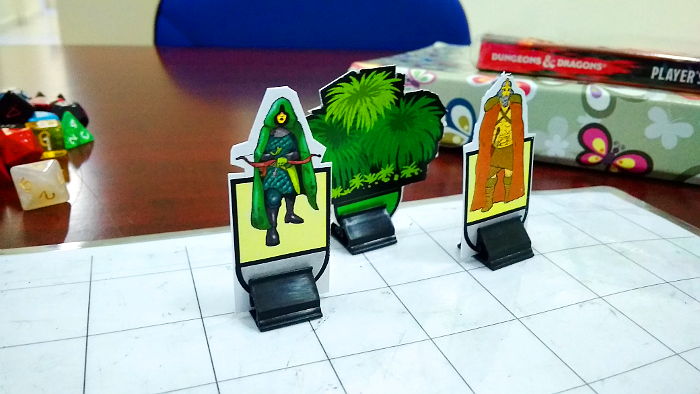 (With the critical success, they both did not have to roll any dice.) Maya and Jonz easily crossed the river, holding on the elven rope. Jonz cheerfully said, “Thank you Maya for a very good throw!”

He jumped straight onto the body to look for gold. The deceased, he saw, was totally drained of blood. He held a longsword. Jonz found a vial of liquid and 50 gold pieces in his pouch. Maya (rolled a Perception check) learned that the body had only been dead for two hours. It was totally exsanguinated, drained of blood. There were two big puncture wounds on its chest.

“I think we got our gold,” said Jonz. “We should leave this forest. I want to spend  my gold!” He stepped over the dead body and led the way. Maya shrugged and followed suit.

Something large pounced on Jonz from one of the tall mushrooms. It was a spider. Its was six-feet long, but had a huge engorged belly and its fangs were stained with fresh blood.

It was unsuccessful fixing its fangs into Jonz’s forearm, but it did wound the barbarian (causing a 10 points of damage). His forearm bled from the bite. (Then, everyone rolled initiative now. Jonz rolls a natural 20. I ruled that he gets two actions during his turn.) 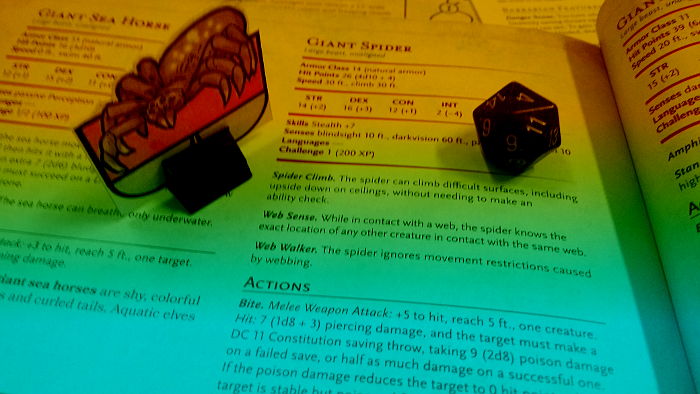 Jonz swung his greatsword (+5 to hit armour class 14 but rolling a 2) and missed. He was quick enough to swing his weapon for the second time (unfortunately only rolling an 8) but he missed the spider again, which was quite fast on its eight legs. Meanwhile the spider’s bite had injected some venom into the barbarian’s bloodstream causing him even more damage as he fought.

The spider turns its spinneret towards Jonz and looses a spray of quickly-hardening fluid. Although in pain, he was able to twist out of the web which entangled the trunk of a nearby giant mushroom. (The spider had rolled a 5 with a +5 to hit Jonz’s AC of 14.)

Meanwhile, Maya loosed an arrow, hitting the spider in its abdomen (rolling a 15 with a +7 to hit) but the spider was still active but angrier now.

Affected by the venom, Jonz still missed upon swinging his greatsword. Suddenly new spray of webbing shot out to entangle Jonz who employed his barbarian rage to tear away free from it. Another arrow from Maya struck the spider’s head causing it to flee, hiding behind a gigantic mushroom trunk.

Instead of attacking, Jonz stood his ground with a guarded stance. The spider came around the mushroom to jump him. Again, the fangs bit deep. The venom affected him even more, causing his eyes to turn bloodshot.

Finally Maya (with a 14 attack) fired third arrow and hit its eye. The spider screeched in pain. In a last ditch attack, Jonz lunged with his sword, skewering it. The spider died with a greatsword down its open maw and out the top of its head.

Before the venom incapacitated Jonz, Maya gave him potion of healing which saved him from certain death (and replenished 8 hit points up to 13). 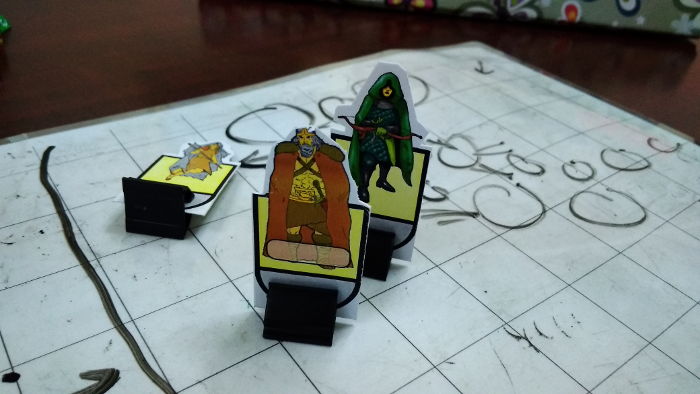 They pressed on through the thickening mushroom forest. The venom’s effect on Jonz lessened over time. But the further they travelled the more webbing they encountered. (They had to roll Survival as they travelled. Maya failed and became entangled more and more, slowing them down.)

Then heard a weak voice calling out, “Help me! Please help me!” Maya (succeeding her Perception check) looked around and confirmed that no spiders were skulking above. There was a woman stuck in some webbing between mushrooms, barely alive and suffering the effects of spider venom.

Jonz ripped the woman out of the web, helped her down. She said, “Please help they have my daughter. We were travelling from the Northern City. They came out of nowhere.” The woman turned and drew a map on the ground with a shaky arm. “This is where they are. They went that way.”

She removed a ring and gave it to Jonz. Jonz asked, “Who are they?”

But she was already dead.

Jonz thought it would be a great idea to go on this rescue mission because the people who abducted the woman’s daughter might possess gold to plunder.

Chapter 3 – The Chasm of the Air Raptors

After walking for another hour, they came to the boundary of the mushroom forest. A great chasm blocked their way. They could see many leagues away, a tall, thin pillar of rock upon which a castle had been built. It was where the girl was being held according to the map drawn by the dead woman.

The canyon below them seemed bottomless. The other side of the canyon was over 200 feet away. Maya and Jonz saw dozens of huge flying reptiles nesting on the crevasse walls of the crevasse beneath them. Many were flying and circling their nests. An idea came to Jonz. He said, “I have an idea, and you’re not going to like this.”

Before he gave a second thought, the barbarian was already airborne and falling into the path of an incoming air raptor. He missed (even with an Advantage!). He twisted and grabbed the elven road rope (with a successful Dexterity save) that was being thrown by Maya who tirelessly pulled him back up to the top of the cliff. 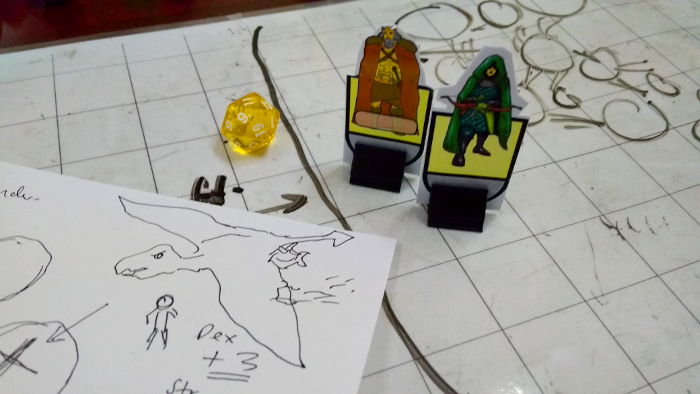 The canyon of the air raptors

Next, they broke out their pack and took out their food and rope to create a trap for the air raptors. (Succeeding a Survival check) Jonz and Maya took over an hour to construct a rope trap with food in the middle for bait. The first hour, an air raptor caught scent of the dried meat and landed. Jonz sprung the trap and (a Strength check with a natural 20 roll) managed to restrain the beast. The air raptor did not fight him and was totally in Jonz’s control (thanks to a successful Animal Handling check). “Come Maya!”

The elf jumped onto the back of the beast.

They both soared out of the canyon and into the blue skies above. They both saw the mushroom forest behind them and the castle before them. He happily muttered, “I’m calling this air raptor Alexander! Alexander the air raptor!”

Half a mile away from the castle, Jonz and Maya spotted something closing in on them from the dry rocky land below. It was a winged serpent, its four wings were beating powerfully to chase its quarry: their air raptor mount. They were twice the length of Alexander.

But the fast-moving serpent caught up and bit into Alexander’s wing, tearing flesh. “Maya! Shoot down the snake!”

Maya’s arrow hits the flying snake in the back. He urged, “Come on, Alexander. Go faster!” (He rolled an Animal Handling check successfully preventing another bite.) As the castle loomed closer, Jonz drew his hand axe, turned and threw it at the pursuing creature which was right behind them. The sharp, heavy weapon struck the serpent’s head. Blood spurted out of the wound but it still pressed on.

Maya aimed once again as Jonz directed Alex to a large open terrace high upon the castle. Her arrow struck the serpent’s eye and pierced its brain. The aerial predator went limp and dropped out of the sky with Jonz’s axe still buried in its lifeless head. 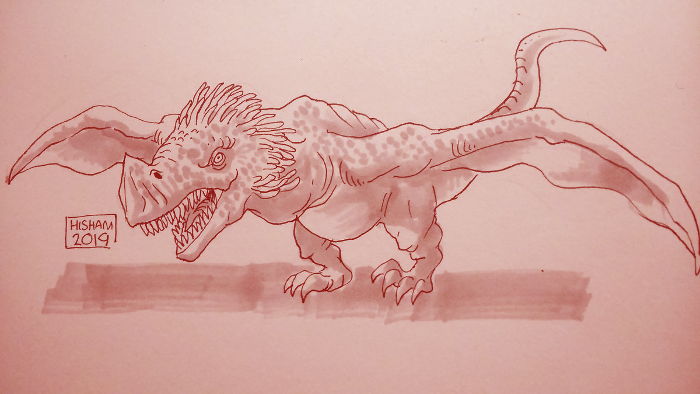 Chapter 4 – The Throne is Taken

Alexander was badly injured. Unable to make a controlled landing, he crashed into flat landing of the the terrace and tumbled violently, breaking his neck and killing him. (The duo rolled a Dexterity save.) Maya leapt into the air, somersaulted once and dropped into a crouching land safely. Unfortunately the fall (which resulted in Jonz having -3 hit points) knocked Jonz unconscious and all banged up with a head injury.

Maya grabbed her healer’s kit. She applied medicinals and bandaged Jonz’s injuries. Soon the elf ranger had stabilised her comrade’s declining health. (Before Jonz’s hit points had increased to 1, he had to roll a Death Save and failed the first one.)

They decided to take a short rest as the sun went down. The moonless and starless sky grew murky and grim. They consumed some food and drinks from their packs. They were in no condition to explore the castle. (Because of the rest, Jonz increased his hit points back up to 10.)

After their rest, the entered the castle. It was dark. So Jonz lit a torch. The deserted space in the castle they entered just indoors of the terrace was a vast throne room with dozens of pillars and a throne in the middle. On the throne was a little girl. The little girl was curiously looking at them.

Jonz called, “Hey, little girl. Hello.” She sat up and did not say anything.

Maya casted as Awareness spell and sensed the presence of something evil, a fiend, close by. She nocked an arrow on her bowstring. As they approached the girl, she stood.

“Why would I not be all right?” the little girl spoke.

“We saw your mother die in the mushroom forest. We’re here to save you, little girl!”

“I have not had a mother for 20,000 years.” Her eyes glow red and she raised both arms. At first one, then two, then three and perhaps as many as ten giant spiders appeared from behind the throne. “My sons and daughters have been released from their prison. We will retake this land.”

What looked like a little girl glowed red and began to float up to a heigh of ten feet. She pointed at Maya and Jonz.