Irfan and I made player characters for Doctor Who Adventures in Time and Space RPG. We might be playing the characters Doctor Simon Olujimi and Max Fox soon, game mastered by Doug. 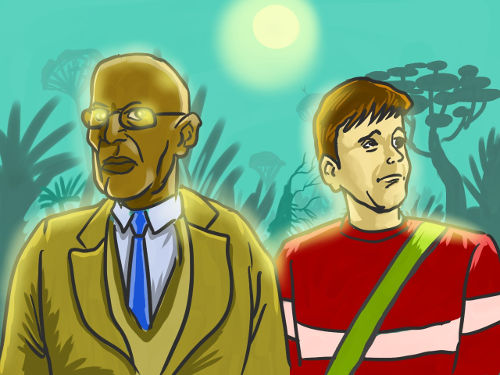 Doctor Who: Olujimi and Fox

Here is their backstory and how they came to be travelling with the Doctor:

Big game hunter Lord Percival Breybrooke was on a safari in the Kenyan jungle in 1977 when he was corrupted by alien tech that he had unwittingly unearthed. The alien tech grafted itself onto him and drove him insane. He went on a killing spree, shooting humans and animals with his arm-grafted energy weapon.

Doctor Olujimi was the one treating injured villagers. All of a sudden, a man mysteriously popped out of nowhere, with a burnt out wrist Vortex Manipulator. This temporal event somehow activated a similar time device on Lord Breybrooke’s alien graft and he was shunted into another time in a burst of light. The newcomer had no memory of who he was, but he had a holocard on him that read, “Max Fox, Robot Mechanic” with the date “3027 A.D.” written on the back. Even bereft of memory, Max repaired the Vortex Manipulator and discovered that it had only enough power for two additional jumps with two passengers. They decided to stop Lord Breybrooke together by chasing him through time. By using the Vortex Manipulator’s time sensors to lock on to Breybrooke’s temporal signature, they jumped back in time and cornered him 100 million years B.C., where he had been killing dinosaurs at random. But he escaped to the far future where he hunted alien citizens of an extrasolar planet named Klaris. Lord Breybrooke succeeded in escaping them once more, and the duo was stranded on this alien planet.

The TARDIS appeared. The Doctor then helped Fox and Olujimi with their immediate plight and took them as Companions. The Doctor realised that they were men out of time and wished to return them where they belong, but dangerous circumstances kept getting in their way… like Autons, Daleks and Cybermen (where Max Fox’s Robot Mechanic skills were invaluable, again even though he was an amnesiac).

And they were still looking to thwart the time rogue Percival Breybrooke.

Here’s hoping for a great (semi-regular) campaign with the First Doctor, or maybe the Second!