Last time on Eclipse Phase: Clouds of a Morning Star… the Gamera Security hypercorp gang was involved in several events, namely Cable played by Kai having a freefall date with Gretchen Ambelina of Pax Familae down through the lethal atmosphere of Venus, and Darren’s AGI DANAI having to perform an impromptu psychosurgery on the other AGI Wandering Ina, played by Andrew.

But I was absent because of Eid vacation and stuff. In-character, Hokusai was busy setting up a new online ID and creating an art community site called the Digital Easel to boost his F-Rep and attempt intelligence gathering there. (Or is he?)

We were met by Captain Christoph de Beers an envoy from the Jovian Republic with military background, played by Matthew. Christoph’s superior Ambassador Marie MacDonnoll will be attending the invitation-only Marquis d’Homem-Christos‘ art show, which will showcase the sculpture he acquired from the mysterious aliens called the Factors to be held at the ballroom of the Cumulus Hotel at the aerostat Aphrodite Prime.

Gamera Security was recommended by one Jovian Major Kate Stackhoff (from episode #somenumber which I did not participate in) back in Jupiter space, who noticed that Gamera matched the profile of another troubleshooter hypercorp she was familiar with named the Fastball Express. (All the forks all the time!) 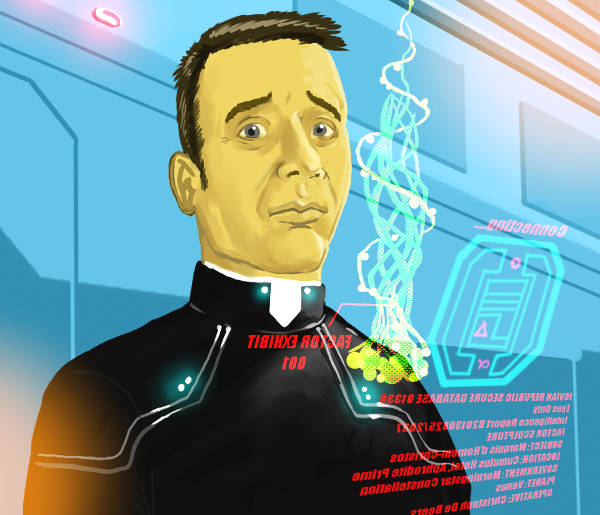 Christoph met the team at the Cherno Alpha restaurant where the Soviet anthem was playing (live from Darren’s phone suddenly) in the private Siberia room. Cable, Ina and Hokusai used their Gamera IDs Brandon Leigh, Kana and Heinrich Plissken respectively. Despite being a Jovian and faced with a neotenic, a Venusian flyer and slitheroid – filthy unhumans – Christoph held his composure. Christoph revealed to them that Jovian Intelligence had discovered a plot to disrupt the event by terrorists, but there was no way to verify it. This meant they needed people on the ground doing security and investigative legwork.

After a proper introduction by Cable and perhaps a 90% disclosure of their operatives and their modus operandi, Gamera agreed to be the Jovians’ security representative during the event.

At the Cumulus Hotel, the team was met by hotel representative Crystalride Rabbitnik (who perceptibly switched egos when she learned that Christoph was a Jovian). She assured him that he needed no extra security. The hotel had engaged the Teddy Bear Roadside Picnic Company to be security during the event, displaying holos of the armed private security force wearing hulking ursomorph sleeves. Ms. Rabbitnik also showed them the venue of the art show: the Clitoria Ballroom which was able to seat 500 guests.

Hokusai’s knowledge in habitat architecture led him to a nanofab feedstock pipeline that was big enough to admit unwanted guests if they were small enough, like a swarmanoid conga line or mini drones. Hotel personnel insisted that intrusion would be impossible. He decided against leaving a microbug in case the hotel did not appreciate covert spy stuff by Jovian-contracted troubleshooters.

After the site inspection, the team returned to their airship and contacted their local allies, namely Gretchen Ambelina and Kage Musha (Yay! Networking rolls!) to find out who would want to sabotage the art show and discovered new information:

Freefall Network: An activist group that vehemently opposed terraforming of Venus, the FFN might bomb the hotel to eliminate the high profile proponents of terraforming, not in the least the Jovians who have just begun forcibly terraforming their own Galilean moons despite public outcry. FFN has been suspected of destroying mining equipment and vehicles using missiles from weapon platforms hidden under the clouds of Venus.

Upon discovering that this was bigger than expected, Gamera requested classified information of how the Jovian Republic came to the knowledge of the art show sabotage. Christoph revealed (with a successful Protocol roll) that their intelligence listening gear picked it up on a tight beam reflected communiqué. Digging deeper, they found that the beam came from (or was reflected again off) Mercury.

This led to two more suspects. Pontus Veidt of Veidt Enterprises Incorporated and Constantine Abramovich of PlazGrom-Hermes. Both are Mercury-based hypercorp that would be economically eclipsed by a terraformed Venus. Disrupting the event and harming the Jovians who supported this might strike a blow to the Venusian terraforming plans.

With less than a week before the art show, what could Gamera Secrity do to find out if this threat was real and how the attack would happen? Should they recommend Ambassador MacDonnoll forego the event? Should they warn the Marquis about the danger to his gallery showing?

Find out in the next exciting session of the game!