Doug ran a great Doctor Who: Adventures in Time and Space RPG session just in time for Halloween! Continuing the previous session Feet of Flesh, Feet of Steel!

After discovering that the blue box that the Doctor and Cindy brought them into was bigger on the inside, Max Fox the amnesiac robot engineer from the year 3027 and Doctor Olujimi the Kenyan country doctor from 1975 were ready to leave the planet Klaris.

At the control room, the Doctor – looking bewildered – asked if they smelled something cooking. Max and Olujimi did. They followed the Doctor who ran through a doorway that brought them even deeper into the TARDIS. Ultimately, they halted in a room full of pipes. There was a heavily-built man, blonde and barrel-chested with thick arms wearing a grimy apron and a chef’s hat. He was frying a kipper while singing The Turkish Song of the Dead. There was no stove, just glowing hot surfaces in the room. He had an array of condiments and a bottle of olive oil on a makeshift shelf on the wall, which might not have been designed to be a shelf. Olujimi asked, “Why do you have Popeye in your blue box, Doctor?”

He introduced himself as Sebastian Cuddy a sailor from Alaska who the Doctor picked up at a previous stop. He offered them some kipper, but the Doctor was aghast at his usage of the Transducer Modifier as a hot plate. After being chided by the Doctor, Sebastian cheerfully stowed away his cooking gear. Even the kipper was stuffed into his trousers pocket.

Sebastian appeared to believe that they were aboard a seagoing vessel, talking as if the TARDIS had a sail, an engine room and a bilge. 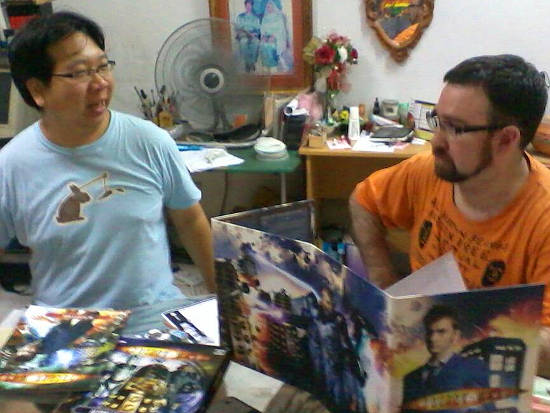 Without warning the lights went out. Even the Doctor was surprised. In the dark there emerged a ghostly vision of five faces: An African man wearing a top hat, a lady, a little girl who suddenly threw a spectral brick at Max scaring him, a shivering man with pointy ears and a woman with her eyes looking down. Suddenly the woman looked up at them and screamed a spine-tingling shriek.

As abruptly as it appeared, the vision disappeared.

The Doctor called everyone to follow him as he returned to the control room. He pulled on levers and pressed on buttons. Everything rocked and swayed violently. Cindy, Sebastian, Max and Olujimi struggled to stay on their feet.

The rocking ceased and the Doctor rushed to the entrance and opened the door. Cindy told the others, “You’ll get used to this.”

To Max and Olujimi’s wonder, the TARDIS was now standing in a small clearing forest field surrounded by maple, oak and birch trees on what is recognisably the planet Earth. The Doctor led them all through the woods where he claimed there should be a town. Soon, horse-drawn carts were trundling past them and chimney smoke rose into the blue sky not far away.

Sebastian trotted into town faster than the rest of the group, following a girl with a cart on her way to the town market. He wanted to purchase the little miss’ melons, but had no currency with which to buy. So he asked around and found a building being constructed in the middle of town. He introduced himself as a sailor to the work crew boss Miles Duncliffe. Shaking his hand while grinning, Sebastian said, “I’ve travelled miles to meet you.” He offered his services as a builder to trade with some of the fine produce at the market. When the group arrived, he offered Max’s services as well.

Miles was astonished to see Olujimi walking around town in nice, well-pressed bush jacket. The Doctor assured him that the dark-skinned gentleman was an important foreign dignitary who had just alighted from far away lands at a nearby port. Miles found it improper for such a man to be travelling with the group that also had a young lady walking about wearing trousers!

As the Max and Sebastian worked to construct the building, the Doctor brought Cindy to a clothier’s to get her some proper clothes and told Olujimi to wait outside for them to finish. The first thing he did was to greet a pair of ladies walking by, causing them some distress.

Then he went off exploring to the shop immediately to the left. It was a clock maker’s shop. The shopkeeper was bent over with age. Olujimi asked if he had a pocket watch. Pocket watches were extremely rare, but the shopkeeper possessed an aged piece from Europe with a scuffed and scratched lid. Olujimi proposed that it be bartered with his stethoscope. At first, the shopkeeper regarded the instrument with scorn when Olujimi demonstrated its function. But the man was delighted at its abilty to listen better into clocks and watches! He agreed to the trade.

Olujimi excitedly showed the Doctor his new pocket watch as he escorted Cindy in her new garments out of the clothier’s. The Doctor chided him for intefering with the time.

En route back to rendezvous with Max and Sebastian, they noticed a woman held in stocks in the middle of the town square. Her face and robes had been soiled by thrown produce. She looked weak and hungry. A bystander explained that the woman was named Anne de Chatraine. She was accused by Mary Weathers and then apprehended by Father Salucious Eden, a revered witch hunter, and was sentenced to be burnt alive by Judge Claude Mason. Father Salucious had also caught and burnt several other witches recently.

Olujimi was horrified. “We should do something about this!”

The Doctor seemed perplexed, but was adamant. “Yes. We should collect the others and get back to the TARDIS. We should not intefere!”

The other two had finished their work and was having a meal of lamb stem and a drink at the local tavern, which was being remodelled. There was no liquor. The barkeep said, “There’s tea. Or water.”

Sebastian asked, “Anything else?”

The Doctor, Cindy and Olujimi arrived. The Doctor asked, “You do have the money to pay for the food, don’t you?”

The Doctor paid for them and urged them to quickly return to the TARDIS. Sebastian was not going to leave without his fresh produce. And when Olujimi mentioned Anne de Chatraine, Sebastian was even more determined not to leave and to save the prisoner. The Doctor said, “Fine. Then we should return to the TARDIS to get tools so we could rescue her tonight. Max and Olujimi (succeeding Ingenuity+Subterfuge checks) recognised a ruse to get the obstinate sailor back to the blue box, but trusted in the Doctor’s decision.

All the Punching and Running

However, back in the TARDIS Sebastian refused to leave the woman unrescued and his produce uncollected. When he rushed out, some villagers were aghast upon seeing him trotting out of the small blue box, followed by Cindy. The villagers bolted back towards town. The Doctor was horrifed to see the sailor pursuing them as he stepped out of the TARDIS. Max and Olujimi ran after him to catch up.

Sebastian intercepted the Salemites and a fracas erupted. He succeeded in punching and entangling the villagers when Olujimi arrived to see them injured and trying to flee the scene. Olujimi grabbed one and told him, “Wait! I’m a doctor!” Sebastian eagerly answered, “Good! You hold him. I’ll punch him.” More punches were thrown as the Doctor, Cindy and Max arrived.

More Salemites came upon the altercation as they were at the outskirts of town. The townsfolk were irate. Olujimi asked the Doctor if it was a good time to run. It was.

They fled, splitting up so they could all circle back to the TARDIS. However (with Max’s and Olujimi’s respective Ingenuity + Athletics rolls came up 7 and 9) Max, Olujimi, Cindy and the Doctor found themselves captives of the Salemites and were brought back to town.

Finding out that he was the only one who succeeded in evading the townspeople, Sebastian began a one-man guerilla warfare against the town of Salem. At the outskirts, he ran from house to house, starting fire, soiling laundry on clothesline and stealing pies cooling on window sills. More townsfolk came after him, but he still managed to avoid capture. After sunset, he rolled a fiery bales of hay toward town causing more havoc, and then stole a horse. This caused more townsfolk to come after him.

The Strangeness of Salem

Meanwhile, the Doctor’s party were brought to a town hall in the middle of Salem, which used to be a barn. There waited a person wearing gaudy robes of authority, and spoke in strange whispers: Father Salucious Eden the witch hunter. He accused the group of witchcraft. After all, witnesses had claimed that they all walked out of a tiny wooden box in the woods. But they would be dealt with later as Sebastian’s guerilla attacks were a more pressing matter. The guards herded them down to the cellar and into a holding gaol.

When the guards had left the cellar, Olujimi thought perhaps he could use his twentieth century intellect to open the door, perhaps pry open the hinges using a clever system of levers. Olujimi was still inspecting the hinge design when Max walked up to the door and kicked the lock, breaking it open. Olujimi muttered dryly, “Or we could do that.” (Max had the higher initiative and succeeded in a Strength + Fighting roll.)

The Doctor sneaked out of the holding cell and gestured the others to follow him upstairs.

The meeting hall was dark. There was one inattentive-looking guard near the closed door. Max and Olujimi crept up to the guard, but Max (botched a Coordination + Subterfuge roll) stepped on a floorboard that creaked loudly. The guard turned to them in distress and saw Max. He asked, “What are you doing… out?”

Olujimi informed him, “Well… this.” A single punch to the nose felled the guard.

The Doctor and Cindy sidled up to the door. They opened it slowly and peered out. There was a small crowd surrounding the witch still held in stocks in the town square. Father Silencius ambled up to her with his hand held palm up before him. The Doctor seemed unnerved and said, “I believe we have to help that lady.”

“I thought we should not get involved with events here, Doctor,” said Olujimi.

“Something is very wrong here! There are forces at work that should not belong here, in this time, on this world.”

The Doctor looked at Max and Olujimi. “Yes.”

Father Silencius’ voice drifted in from the town square. “She must find forgiveness. I will send her on a journey to the Garden of Joy and Bliss. There she will find forgiveness. Like the others. Like Agatha, Cynthia, Beatrice and Lyndsey.” The voice sounded cold, powerful and inhuman. From their vantage point, they saw something that terrified them: a mist was emerging from the terrified Anne de Chantraine’s mouth and snaked its way to Father Silencius’ hand.

The Doctor, Cindy, Max and Olujimi looked at one another, dumbstruck. 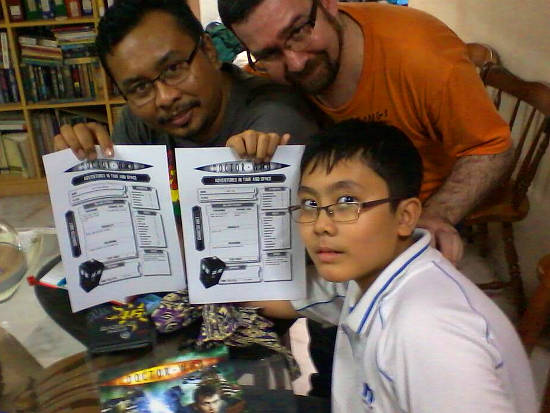