Last time on Eclipse Phase: Clouds of a Morning Star…

In Transit to Altitude 40km

The mining aerostat Lucifer was a bustle of activity. Miners. Support staff. Security. Tethered over Ishtar Terra close to the north polar region it was being assailed by gale force winds generated by a Venusian polar vortex. The aerostat appeared from a distance to be listing although tethers allowed it to maintain station keeping. But Lucifer was their destination, tracking a terrorist signal from the city aerostat of Aphrodite Prime that was bounced off a mirror assembly on the superstructure of the orbital habitat Gerlach.

GamSec descended upon Lucifer via an elevator from the floating high altitude docks. Their patron Kage Musha had his salvage contractors the Teddy Bear Roadside Picnic Company provide them whatever they needed to complete their investigations. The TBRPC representative who escorted them down was Mr. Goldie, sleeved in a sun bear-variant ursomorph.

Mr. Goldie explained to them that Lucifer mined minerals from Venus surface, and two security hypercorps were contracted to protect the operation. TBRPC and the Ladyboys Salvage and Repo hypercorp, who also had salvage operations on the surface. Teddy Bear and the Ladyboys had a well defined boundary of operations which they both adhered to. This caused a slight competitiveness to emerge between them.

When Mr. Goldie and GamSec debarked from the elevator, they passed into the Quarantine Zone of Lucifer, through security checkpoints with warnings in Thai and English. At an interview room, they were joined by another ursomorph, Mr. Winnie. Cable asked him if he was familiar with cases of crashes or falls from the aerostats to Ishtar Terra.

Shelby Cobra, the Aphrodite Prime indentured cybersecurity employee who sent the signal to Ishtar Terra, did so without being aware of his own act. Shelby was sleeved and sent to work by people who had connection with Ikea-Tata Construction hypercorp. Ikea-Tata Construction – contracted by Aphrodite Prime to expand its Aviary – had been created by the clique of skydivers who fell to their deaths in a skydiving incident.

Mr. Winnie was unaware of any recent events although it was too far north for anyone to skydive.  No normal aerostat nor transport would venture here. The polar vortices would throw them about like a rag doll and kill them. He also mentioned of finding disembodied cortical stacks during surface salvage and security operations, which they would sell to stack brokers.

(Cable rolls Investigation 38/61) Kage called them via a secure channel from Aphrodite Prime, telling them that his men had arrested Shelby Cobra and had determined that his signal was delivered to a location within the caldera of a long extinct volcano named Sacajewea Patera. The location was within a Ladyboys area claim zone. Were the Ladyboys in on this?

They tell Mr. Winnie that they required a reconnaissance trip to the surface and invited him to be their guide. Instead Mr. Winnie suggested their CEO Mr. Snuggles would be able to help as surface operations was his speciality.

A white-furred polar bear ursomorph, Mr. Snuggles cautiously greeted them into his office. Like everywhere else on Lucifer, the office was small, fitted with the barest of necessities and very utilitarian. The ursomorph, when he stood to welcome them, towered over the members of GamSec. After pleasantries, they began to converse.

Mr. Snuggles originated from Scandinavia before the fall and was sleeved in an ursomorph on Oberon, a moon of Uranus. He missed his old colony there, and the Queen of Uranus, Dame Miley Cyrus who was good to her subjects. 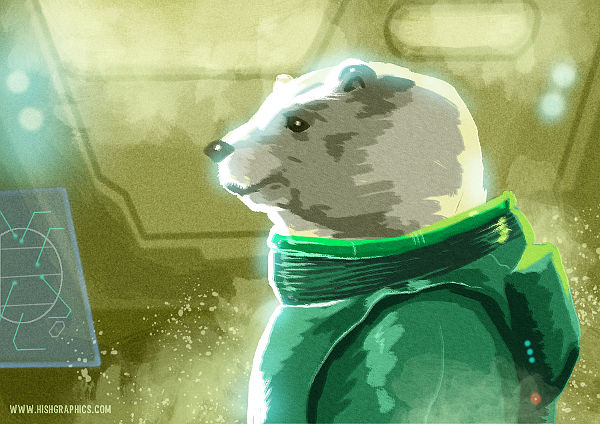 Cable then asked if Mr. Snuggles would pilot them down with a lander for a surface reconnaissance mission of a Ladyboys claim zone. The ursomorph was wary of the provocative act and demanded evidence that the Ladyboys were a threat to Venus security. However, the evidence Cable presented Mr. Snuggles considered to be circumstantial. Therefore there would not be a large support team. Instead Mr. Snuggles himself would take them down in a small lander because his curiosity was piqued.

But first the team agreed to train to acquire proficiency of not dying on the surface of Venus. The training took a few days.

Secondly, DANAI and Hokusai resleeved in q-morph before casting off in the lander.

In Transit to Altitude Zero

The lander, skilfully piloted by Mr. Snuggles was in a controlled fall toward Ishtar Terra. Snuggles, Cable and Ina were clad in their high-pressure ADS while the q-morphs were secured in the unpressurised lateral internal cargo bays. Constructed from sapphire, the q-morphs would only be operational upon surface atmospheric conditions. Very much conscious, the two still kept in contact via GamSec’s mesh VPN.

The ursomorph explained that the lander was designed to land on and take off from the surface. If there were no available aerostats or large landing dirigibles in the area, it could launch itself into low stable orbit and broadcast an SOS. There was also a universal airlock installed for space deployment.

Soon, the lander’s sensors were picking up signals from the Ladyboys Claim Zone on Sacajawea Patera. Mr. Snuggles set down the lander between the small impact crater Zlata and the edge of the caldera. Everyone geared up with their seeker launchers – as well as seeker use skillsoft. Firearms would not pop at surface pressures and beam weapons were rock projectiles in treacle. 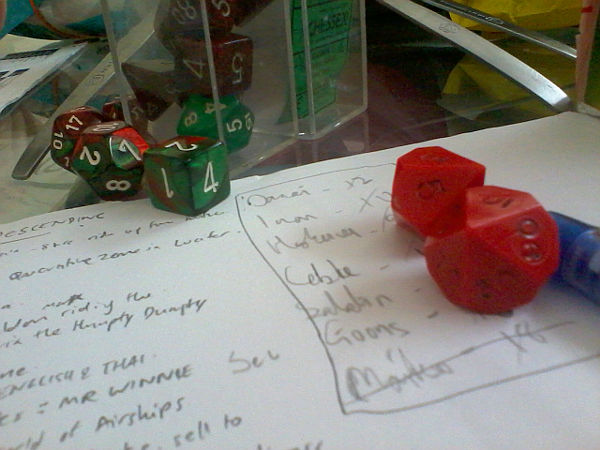 DANAI led the way, crawling on all fours and sweeping the area with his T-rays. The particulate-laden high-pressure atmosphere diminished their sensor capability. As they trod uphill, Hokusai though that their footsteps would alert any sensitive seismic sensors that the Ladyboys might have deployed. He identified a spot where a controlled explosion would trigger a rockslide which would allow them to reach the lip of the crater. Ina planted then set off the charges. However, the rockslide was bigger than anticipated. Everyone scurried to get out of the path of the avalanche (Success in Freerunning for all) then they quickly scaled to the top of the patera.

Over the lip of the caldera, the ground sloped threateningly into the rock-hard maw of an extinct volcano. There was an impact crater several hundred metres downslope. There was a piece of curved metal fragment perhaps fifty metres across buried into the centre of the crater. The Ladyboys appeared to have set up an encampment at the far end of the crater, allowing GamSec and Mr. Snuggles to approach unseen, the fragment blocking the Ladyboys’ view.

“Oh bother,” whispered Mr. Snuggles as they arrived at the metal structure.

Hokusai accessed his skillsoft in Space Habitats said, “That’s a fragment of an orbital habitat.” (Success in Interest: Habitats 40/40.)

Cable asked, “Why didn’t it burn up on re-entry? Why didn’t the impact destroy it?”

They remembered that the American habitat Timothea Bush-Kennedy a.k.a. Timbuk3 had fallen into Venus during the Fall, attacked by TITANs and exsurgents.

Cable thought for a while and asked, “If they’ve been here for a while, why haven’t the Ladyboys dug the fragment out yet? Why haven’t they destroyed it or salvaged any part of it?”

With thoughts of dormant exsurgents in their mind, they arrived at the habitat fragment. Ina and Hokusai looked out from the long end of the semi-buried structure. Ina reported (with a Perception success 22/60), “There’s a q-morph with a seeker missile launcher on guard at their encampment. If we step into line-of-sight, we’ll be made.”

Cable, DANAI and Mr. Snuggles holed up in the middle of the structure. DANAI (upon Perception 50/60) told them, “I’m picking up what seems to be an airlock buried just under the surface.” Cable wiped the grime and dirt from an exposed surface of the fragment. There were stencilled words on the structure, which somehow survived planetfall: LAKE OKEECHOBEE RESEARCH FACILITY. Cable (fails a COGNITION roll, 89, unable to Moxie) felt a strong sense of famliarity with the name although he was unable to place why. Ina (upon a successful Research roll) said, “This used to be a United States Space Force installation.”

They dug deeper and unearthed a glowing keypad to the airlock. Hokusai scuttled up to them and asked, “How can there be power after all these years?”

Cable sidled up to it and pressed on the unfamiliar keypad (Interface success 01/50) with strange familiarity. WELCOME TO USSF, a display screen lighted up. There was a mesh ID handshake from the panel, querying who was knocking on the door. The display screen blinked, WILLIAM CABLE, ACCESS GRANTED.

Not William Cable Jr.? Now Cable’s curiousity was piqued. Shelby Cobra’s stolen memories were right! His father had been on Timbuk3 during the Fall. Why?

Mr. Snuggles was astounded, “How did it grant you access?” Cable beamed a babyfaced smile at the ursomorph (while critically succeeding Deception on 33) and said, “These things happen.” Cable’s confidence allayed Snuggles’ alarm.

Cable queried the door’s spime, which told him that opening the door would cause massive structural failure. More importantly, the spime displayed the last user of the door, identified by mesh ID: William Cable. His father who had been missing and believed to still be alive somewhere in the system was at the Lake Okeechobee Facility. Again, why?

Mr. Snuggles said, “We should fall back. The Ladyboys has legal claim to this site, even if they did not report their salvage.”

Cable would not be dissuaded. Cable Senior was his psychological trigger word. He wasn’t leaving until the facility’s – and his father’s – secrets were unlocked. Timbuk3. The Ladyboys. Ikea-Tata Construction. Free Fall Network the anti-terraform organisation. Marquis d’Homem-Christos the reclusive artiste. Saladin Pelita the ghostly terrorist, Shelby Cobra the unwitting agent and William Cable. How were they all connected?

So, they began to plan.

To be continued in the next exciting episode of Eclipse Phase: Clouds of a Morning Star.