I missed two roleplaying sessions of Eclipse Phase since the last game.

A more detailed write up of this session can be found on Obsidian Portal.

After the Cumulus Hotel caper, Hokusai stayed on their dirigible while Cable, Ina and DANAI went out into the field.

As Cable was viewing the flying gasbags that they’d saved from destruction at the Aviary, the animals began falling and crashing onto the deck dead.

Kage Musha their patron in Morningstar Constellation called for GamSec to chew them out. How could have the Aviary animals be poisoned? There was a danger of Kage punishing GamSec by resleeving their egos in koi fish and displaying the koi in his aquarium in his office.

Cable confidently allayed Kage’s doubt about GamSec by informing him that he had direct connection with Free Fall Network (FFN) and their contact, Saladin Pelita. Saladin had believed that Cable was a fellow anti-terraforming terrorist. Satisfied by Cable’s information, Kage informed him that from his own surveillance and intelligence gathering, the individual named Saladin Pelita was sleeved in the morph resembling Baron Julian Robbari, the heir to Soletta Corp a known front for the Fa Jing criminal organisation.

Cable also informed Kage that they would next be investigating FFN’s agent in Cumulus Hotel cybersecurity, the reinstated civil servant named Shelby Cobra.

Hokusai-free Session 02: This Time We Keep A Copy

A more detailed write up of this session can be found on Obsidian Portal.

The speck bot they left in Shelby Cobra’s apartment alerted them to suspicious activity. The laser communication system had been transmitted while being pointed at Gerlach station in orbit. To investigate, Cable, Ina and DANAI booked seats on a shuttle from Aphrodite Prime.

Meanwhile, Cable had fabricated a new tripod walker morph with installed weapons ranging from railguns to seeker weapons for DANAI to use. The walker was named “Paul”.

The trio investigated the spot where the laser comms had been transmitted to on Gerlach and discovered that the mirror system there had been hacked and coopted to bounce line-of-sight beams back onto Venus: specifically somewhere in Ishtar Terra at the north polar region of Venus. The patch was rigged with an improvised explosive devise. Unable to defuse it, GamSec had to call station security to help neutralise the bomb.

Unable to determine where the signal was directed to exactly, the team returned to Aphrodite Prime to interrogate Shelby Cobra.

As management consultants, GamSec would invite Shelby for an interpersonal, live interview. In preparation, they rented an office space and fabricated two more Paul walkers mounted with non-lethal armament and EMP microseeker launchers to quickly prevent him from calling for help. Ultimately, foam spray, EMP and neural agoniser were deployed to take down Shelby… who was basically a regular unarmed civil servant.

In simspace, Shelby was confused but cooperative, confirming that he was an indentured ego who was reinstated and offered work in Aphrodite Prime by one Julian Robari. But he did not remember bouncing the secret communication laser off Gerlach.

DANAI and Ina performed psychosurgery to delete Shelby’s memories of them and released him. Also, they pocketed a fork of Shelby –  a copy of his ego – for further interrogation. 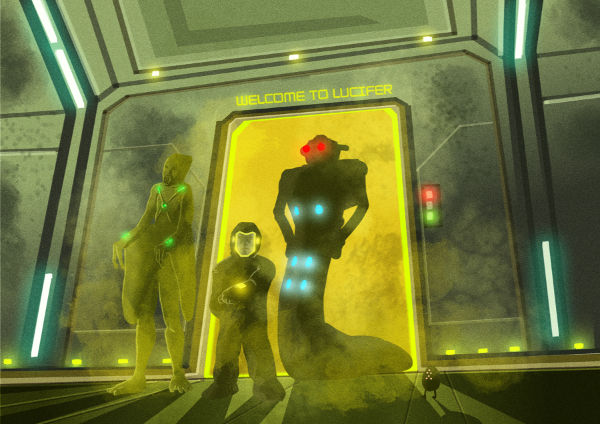 (Hokusai returns as an active player character in this session.)

Stop me if you’ve heard this one: A lonely civil servant planned a vacation to a town with seedy pleasures while being tailed by spies. Parvarti was pretty seedy for a vacation destination and that was where Shelby planned to spend some time off for a few days. Cable and Hokusai flanked Shelby – AR markers pinned on their subject – as the unassuming pod morph headed for the independent aerostat.

Would he meet his handler there? Was he planning to exfiltrate away from Venus? Was he on another mission?

No. His trip was purely for pleasure. Cable and Hokusai followed him from one pleasure house to another, one dance club to another. Shelby never formed any lasting bonds with the people he interacted with. Neither did it seem he was communication with anyone in secret. He truly appeared to be just a sad and forsaken man, indentured to Morningstar Constellation.

Cable discovered ponyclopping in one of the bars, but that’s a tale for a later time.

So, what happened when a lonely civil servant  planned a vacation to a town with seedy pleasures while being tailed by spies? Nothing out of the ordinary, considering the circumstances. That’s the joke.

Although when they returned to Aphrodite Prime, Cable was a changed man because of the VPN feed from Ina and DANAI.

This was what they learnt.

Stop me if you’ve heard this one: An unsuspecting fork with edited memories and two infomorphs walk into into simspace.

The simspace was engineered in a few days from Shelby-α’s memories, to make him believe that it was before the fall. His own memories placed him in an office on a habitat: Timothea Bush-Kennedy also known as Timbuk3 – an American station – although the United States of America no longer existed after the Fall.

The memories flowed back and forth in time, through DANAI and Ina, intangible as dreams. Like dreams, Shelby-α would not be aware of being in one. They both conjured an avatar to visit Shelby-α’s ego in its own little purgatory. Shelby-α greeted the newcomer, who was puppeteered by either DANAI or Ina depending on skills required. As a visiting auditor, the duo coaxed information from the fork. The information flowed to the GamSec VPN system where it could be viewed by Cable and Hokusai live from Parvarti.

Shelby Cobra was from North Carolina and an employee of the Department of Space Security. He had been assigned to Timbuk3 not half a year before. A dream job in space. Then something had happened. What was it? What was it?

The GamSec infomorphs massaged the simspace data and time rushed forward. Shelby-α was busy in the expansive arrival bay. Newly debarked travellers flowed out of the gates. Indicator screens above the gates flashed the name: U.S.S. Ticonderoga. The memory ghosts flew past.

A woman and a little boy ran into the open arms of a man. DANAI looked at the AR screen from Shelby-α’s feed. The name William Cable hung over the man’s head. Cable received the data live from the GamSec VPN. This was what he was looking for. A secret to his past, his father’s dark life before the Fall. What was he doing on Timbuk3? He was more determined to discover what happened to him before the Fall.

More memory ghosts came and went. One figure wending its way though the crowd piqued the infomorphs’ curiousity. He had an AR label on him: Elvis Kaspersky. They filed it away for later reference.

Then the world turned to the colour of a television tuned to a dead channel, although televisions and their channels had been extinct for years. The memories had ended there. There was no record of the Fall occurring in Shelby-α’s memory nor of the exsurgent attack at Timbuk3 and the habitat’s destruction and planetfall to Venus.

They turned off the lights before leaving the simspace. Shelby-α’s ghost world winked out of existence.

As Hokusai and Cable returned from Parvarti, word came from Kage.

His people had calculated that the signal from Aphrodite Prime was bounced toward Sacajewea Patera, a dormant caldera on Ishtar Terra. The mining aerostat Lucifer was presently hovering forty klicks above the north polar region. Kage assigned them to investigate by travelling to Lucifer by promulgating a security audit. Their contact would be the Teddy Bear Roadside Picnic Company, the salvage hypercorp ran by ursomorphs they had looked into some weeks earlier.

After some rest, they geared up. The mission began with a public transport dirigible ride to a docking station. The TBRPC rep who greeted them was an ursomorph named Goldie, who took them down toward Lucifer with a descent balloon, creaking as the lower atmosphere gripped it harder as it descended.

Soon, the clouds cleared enough for them to see the aerostat. Sheathed in synthetic sapphire, Lucifer awaited their arrival.

Stop me if you’ve heard this one: A neotenic, a slitheroid, a Venusian glider and a sheldon walk into Lucifer…

To be continued in the next exciting session of Eclipse Phase: Clouds of a Morning Star.