The first RPG session I ran during the Geomatics Carnival 2018 at UiTM Arau was Fantasy Flight Games’ Edge of the Empire/Age of Rebellion. The players, who were UiTM students, used the Legends of the Galaxy pregenerated character sheets I used in class previously.

Edge of the Empire

The YT-2000 light freighter Sitichepa (I’m… sure this is an in-joke between the players) dropped out of hyperspace off the Crait system. Aboard the ship are a group of rebel operatives in search of fellow rebels whose ship disappeared near Crait: the star-pilot who was born and raised on space freighters and barges Kreepo, the sharp Twi’lek engineer Byt, the droid assassin FLAM-O who was bristling with weapons and Malea the Force sensitive warrior who had a lightsabre on her belt.

Kreepo brought their ship closer to the desolate planet so Byt could scan its surface for signals. The Twi’lek (upon a successful Computers roll) picked up a faint signal below. The pilot dove into the atmosphere and headed for the source of the signal.

It was a lonely gray mountain jutting up from the white salt flats of Crait. The ship circled the mountain where Byt spotted a large cave entrance, large enough for a light freighter to have flown into. After a short discussion, the team decided they should land on the plains several hundred metres from the cave. 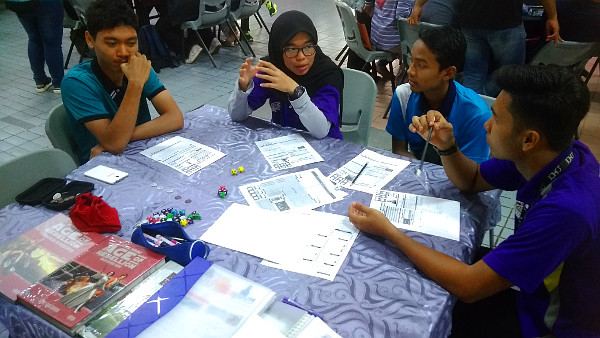 The Sitichepa set down upon the vast, bone-white salt flats within sight of the cave entrance, surrounded by large boulders.

Malea reached out with the Force trying to sense if there was anyone in the vicinity. The ubiquitous energy field generated by all living beings reached out into the distance. Through the Force she perceived two humans in the cave before them, but there were several other non-human life forms dotting the interior of the hill. What were the creatures and why did the humans not come out of the cave?

Kreepo lowered the ramp. Two of the crew, FLAM-O and Malea, popped out to scout ahead. Malea brandished an HL-27 light blaster pistol while FLAM-O hefted an unidentifiable heavy blaster rifle.

Meanwhile, Kreepo went to check on the Sitichepa‘s landing gear with a tool box.

They crept all the way to the cave entrance in broad daylight. Peering inside, they saw a YT-1300 freighter nested cozily in the dark chamber within.

Upon reporting this fact by comlink to the Sitichepa, Byt thought of using the ship’s comlinks to broadcast a safecode to the rebels within. She said, “This is the Sitichepa. Code SITI14. We are here to help. Please respond.”

After a moment, there was a terrified voice on speakers. “Help. We can’t leave. The ship can’t take off any more. Four of us has died. Two of us left. Be careful!” 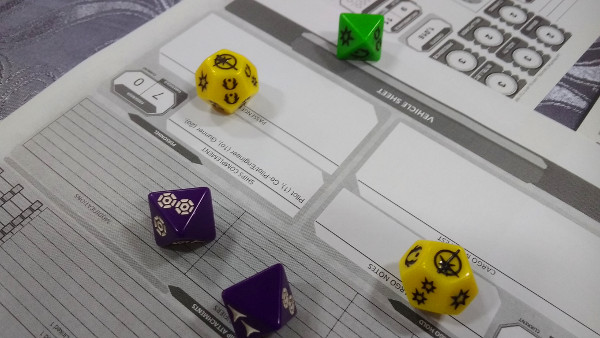 The Narrative Dice helped them narrate

Byt gave her teammates the go-ahead. Malea and FLAM-O rushed in with weapons pointed into the darkness at the far walls and myriad connecting tunnels. They saw two rebels in Alliance SpecForce camo uniforms rush down their ship’s ramp.

Suddenly, something rushed in from the shadows. It was fast, bulky and did not resemble a human. The creature leapt up and bit down on one of the SpecForce commandos over his shoulder from behind. The commando screamed in pain then before anyone could do anything, the man was pulled quickly back into the darkness still screaming.

They saw several more coming out of hiding and circling them. Malea (successfully rolling the Lore skill check) identified the six-legged bear-like creature with white, crystalline fur, a parrot-like beak and a thick reptilian tail as a species known as jin-chepa (…again, probably another in-joke).

The jin-chepas outflanked them and attacked. Malea and FLAM-O blasted away at the animals with their weapons, trying to defend the surviving commando too, but they were fast. 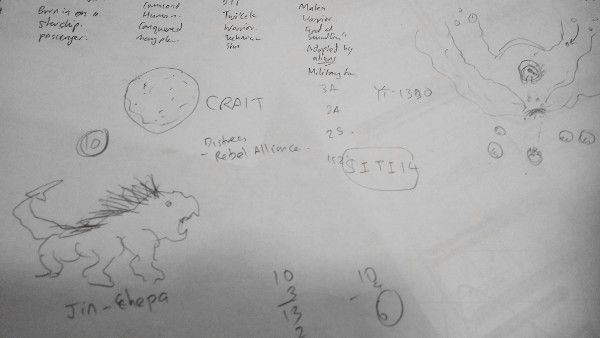 I should properly stat up that jin-chepa creature

Finally, FLAM-O managed to punch a flaming hole through one of the jin-chepas with his heavy repeating blaster and then Malea shot at a huge stalactite above them which appeared to consist of a smooth red opaque crystal. There was a blight flash of explosion and the crystalline stalactite fell onto where the last jin-chepa was.

But the creature leapt up and away from the shattering red crystal and bore down onto Malea with its bony beak. Malea’s lightsabre ignited and the bright blue beam skewered the jin-chepa’s skull.

Both jin-chepas were dead but howls of more could be heard from the deeper tunnels of the cave network. Malea called out to the commando and they all ran out into sunlight.

“Prepare for take off now!” FLAM-O radioed Byt, who called Kreepo back into the ship. An entire pack of jin-chepas were chasing after Malea, FLAM-O and the commando. Kreepo flew their YT-2000 low and landed near them, allowing them for a fast entry up the ramp while Byt fired the ship’s cannons to keep the creatures off their backs.

Then Kreepo opened up the throttle. The Sitichepa ascended at a tremendous speed up the atmosphere and into space.

Malea and FLAM-O was trying to reassure the surviving SpecForce commando that he was now in safe hands when the proximity alarm suddenly blared through the speaker. Blocking their path was an enemy! A 1600 meter-long, wedged-shaped colossal starship: an Imperator-class Star Destroyer whose gunners already had a target lock on the Sitichepa!